The Jets had just limped past the tanking Miami Dolphins on Sunday, while the Ravens were coming off their league-leading seventh victory against a team currently holding a winning record. The Ravens are the Super Bowl favorite, the Jets are one of the worst teams in the league.

Lamar Jackson entered the game as the MVP-elect. He leaves it in position to be voted unanimously as nobody is close to him this season.

Jackson now has 3,992 yards, 40 touchdowns and 6 interceptions for the year. He broke Michael Vick's single-season rushing record (2006) when he ran for five yards on an option run in the first quarter. Jackson has 1,103 rushing yards in 14 games. Vick had 1.039 in 16 games. It's a common comparison but comparing Jackson to Vick actually does Jackson a disservice. He is a far superior quarterback to what Vick was. Vick was a phenomenal athlete with a huge arm, Jackson is a nuanced passer who understands how to mitigate pressure in the pocket and diagnose coverages. He throws with touch, timing and anticipation while making subtle or aggressive movements in the pocket when required. He just happens to be the most explosive and elusive quarterback ever too.

On the opening drive of the game, the Ravens showed their diversity by using play-action, power runs and option runs to drive down the field. Mark Ingram eventually ran in the touchdown on a read-option handoff. Jackson only had two straight dropbacks on that drive and while he contributed more on his 20-yard run than those two plays combined, those were more significant for his performance.

Williams is a defensive coordinator who is going to try and confuse the quarterback.

On both plays, he showed an aggressive front to threaten a blitz but ultimately dropped those blitzers into coverage so the defence used a three-man rush. Young quarterbacks typically lack patience. Therefore, showing them a blitz where they anticipate that they need to get the ball out quickly, but dropping into coverage means you can bait them into an interception or sack. Jackson's poise allows him to hold the ball in the pocket and adjust when the defence changes at the snap. That means he can comfortably connect with Willie Snead as he did on the first of those dropbacks for a 15-yard gain.

Williams' challenge, and the challenge for every other defensive coordinator who has faced Jackson is that there isn't a good way to approach stopping him. On the second drive of the game, Williams changed it up and Jackson beat him again. 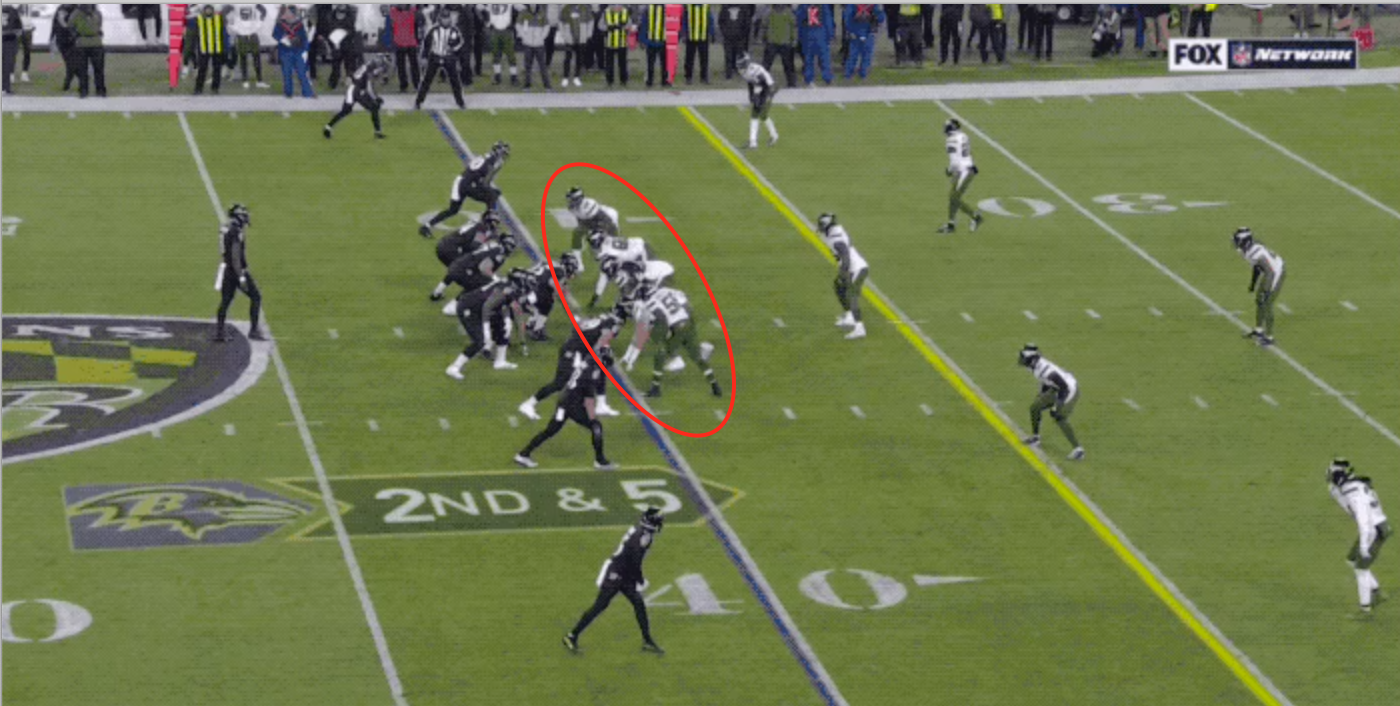 Now the first thing we need to do is go back to the original play. Note the defensive front in the red circle. 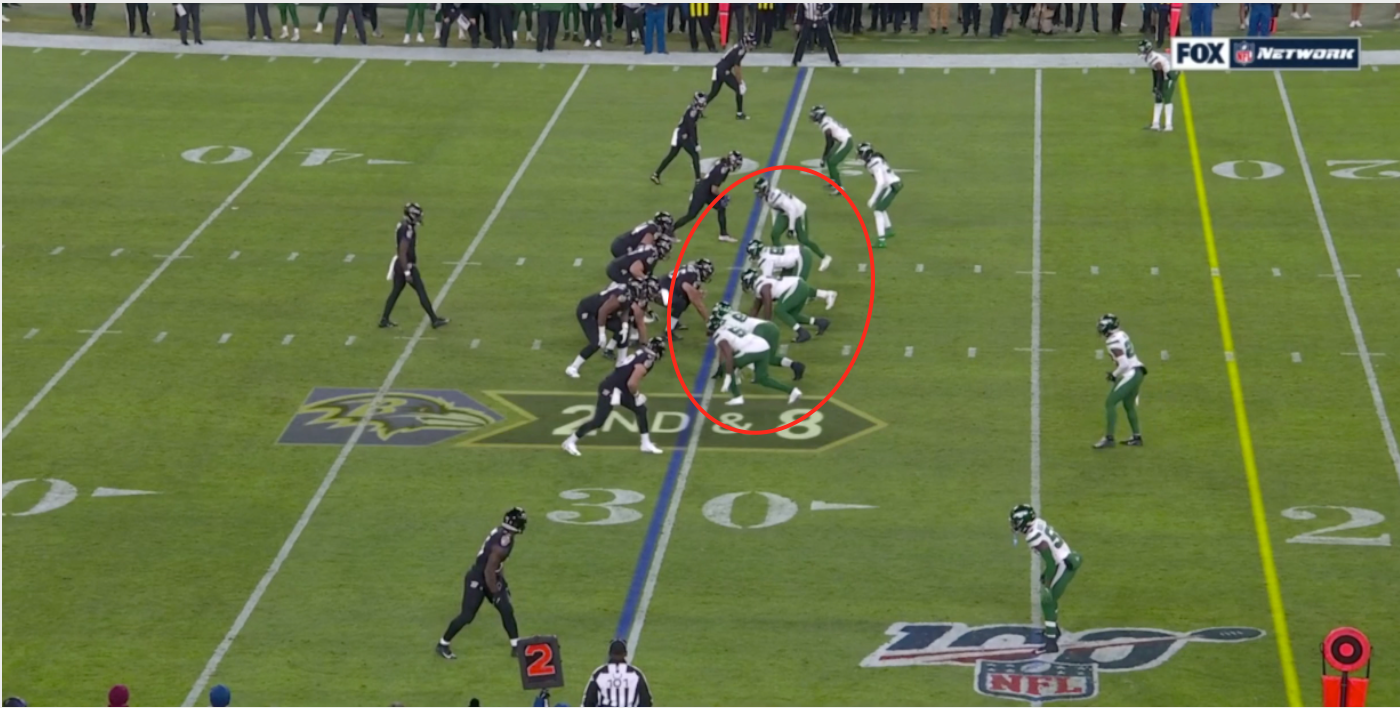 This is the play we're about to look at. The defensive front in the red circle is exactly the same. But on the first play, the defence showed blitz and dropped both edge rushers back into coverage. The key for Lamar Jackson here is that he can see there is no linebacker in the middle this time. The linebacker in the middle last time was there because that was his zone. This time all of the defenders who aren't threatening to pass rush are lined up across from receivers in man coverage.

Lamar Jackson likely knew he was going to run this ball as soon as the Jets followed through with their blitz. He pump fakes to the outside and lets the play develop so his receivers can pull the defenders deeper downfield and create space. The Jets didn't rush contain (a disciplined pass rush where the defensive line keeps the quarterback in the pocket) nor did they have a spy waiting for Jackson in the middle of the field. Those two details combined to give Jackson a huge amount of space to run into.

In the redzone, Jackson executed a bootleg play fake that was well defended by the Jets. They got a backside defender to prevent Jackson from running into the flat. This forced Jackson to stay inside and reset his feet. He stayed patient, using his eyes to sell the inside throw before connecting with Miles Boykin outside. Jackson's patience and disciplined footwork set him up to attack the defence past its initial phase, while his eye movement allowed him to manipulate the coverage to create an open receiver.

Nothing had worked for Williams on the first two drives of the game, so he tried something completely different on the third drive. It didn't work either.

Williams had used a disguised three-man rush and a blitz from the same alignment. Now he used a different alignment and used a disguised slot blitz as part of a four-man rush. Look at the left side of the above gif. The cornerback covering the slot receiver blitzes the quarterback. Jackson recognizes this instantly. He knows that the deep safety is likely to rotate to the right side so he can cover the slot blitz. That's exactly what Jackson sees. That rotation isolates a linebacker on Marquise Brown, the Ravens most explosive wide receiver.

Brown one-on-one against a linebacker down the middle of the field is a huge mismatch.

Jackson throws a perfect ball into the endzone. It falls incomplete because the linebacker tackled Brown before he could catch the ball. That was defensive pass interference. The penalty set the offence up at the one-yard line, allowing Jackson to connect with tight end Mark Andrews for his second passing touchdown of the game.

The Ravens offence stalled toward the end of the second quarter and during the early stages of the third quarter. Jackson didn't have any egregious errors, the Jets defence tipped a pass on third down and contained the running game to force them off the field.

Marquise Brown eventually caught Jackson's third touchdown pass of the game. It wasn't a good throw. Jackson pushed his receiver too far into the endzone so Brown had to make an unnecessarily difficult play on the ball to stay in bounds. Brown's ball skills to track the flight of the bell then his footwork to drag his toes to stay in bounds were outstanding. Plays such as this one are why he was the Ravens' first-round pick in the draft this year.

While the ball placement wasn't good, this again was a play that showcased Lamar Jackson's intelligence.

The Ravens have the perfect route called to exploit the Jets coverage. At the precise moment the cornerback passes Brown off to the safety, Brown straightens so he can work to the endzone. He splits the cornerback and safety equally so neither player picks him up. Jackson reads the deep safety and checks the cornerback. Once the cornerback turns to look back at him, he knows he's got Brown wide open in the endzone. His timing releasing the ball and his decision is perfect. The throw is just a little off.

Jackson had set the record for the most touchdowns by any quarterback aged 22-or-younger with his second in this game. This score extended that record, before another drive in the third quarter extended it again.

While his fourth touchdown pass was the play that ended the game as a contest, the two plays that set it up were more impressive. In a wholly unnecessary move, John Harbaugh chose to go for it on Fourth-and-1 deep in Ravens territory with a 21-point lead. Jackson took the ball in shotgun and dropped back to pass. His initial read wasn't there. It looked like Jackson panicked when his initial read wasn't there so he broke the pocket prematurely. But it became evident that he broke the pocket for a specific purpose.

Lamar Jackson broke the pocket to become a scrambling threat, pulling the coverage down. He understood Mark Andrews' route and understood he'd have a big shot opportunity if the defence reacted to him as they did.

As if to hammer the point home, on the play immediately after this one Jackson throws for a first down by setting and resetting his feet within the confines of the pocket. He changes the leverage for his offensive linemen with precise movements while keeping his eyes downfield to locate an open receiver.

Jackson set another record with these plays.

Throwing five touchdowns (Yes, he added a fifth in the fourth quarter) on a random Thursday night in the regular season won't live long in anyone's memory. It's the traits that Lamar Jackson showcased and has continually showcased as a passer this season that will make a lasting impact. The Ravens are the best team in the NFL in large part because of Jackson. He's who he is in large part because of his intelligence as a passer.