We're into the final quarter of the NFL's regular season.

The Baltimore Ravens secured their playoff spot with a win over the Buffalo Bills. Lamar Jackson remains the MVP favourite. The San Francisco 49ers got a statement victory over the New Orleans Saints and the New England Patriots fluffed their lines once again.

The playoff picture is starting to take shape, but it's not just the post-season that matters at this time of the year.

1. Sean Payton Must Take the Blame

Two games come to mind as comparisons to this weekend's Saints-49ers game. The Los Angeles Rams' 54-51 victory over the Kansas City Chiefs last season and the New England Patriots' 41-33 victory over the Philadelphia Eagles in Super Bowl LII. Neither game was as good. A lot of the drama in those games came from unforced errors, bad execution or major mismatches. A last-second field goal gave the 49ers a 48-46 win yesterday. It was as enthralling a game as the scoreline suggests it was. And the quality of play from both sides was spectacular.

Coaching was the difference.

Kyle Shanahan knew the importance of this game. He treated it like a playoff game. He broke out two trick plays that they hadn't run all season. One led to Emmanuel Sanders touchdown pass, the other saw fullback Kyle Jusczyk execute a speed-option to convert a third down. Shanahan found the perfect balance in his offence. He sprinkled those plays into the regular foundation of his scheme. Sean Payton did the opposite. Payton moved his offence away from what was working, forcing it toward a gimmick instead.

Midway through the second quarter, Drew Brees had scored four touchdowns. He jumped into the endzone with 7:31 remaining in the first half. He already had three passing touchdowns. No quarterback in the league picked apart the 49ers defence like that. Even considering the injuries to the safeties, it was a startling performance built on timing, intelligence and precision in a varied passing game. And yet, for some reason, that was when Payton chose to go away from his star quarterback.

On the following drive, Hill dropped back to pass on first down. Alvin Kamara ran the ball on second down and Hill executed a designed running play on third down. The Saints punted for the first time. That drive didn't deter Payton. From then until the fourth quarter, Hill was a prominent piece of the offence. He finished the game with five carries for 13 yards, he was the primary option on a shot play design that failed and threw the ball incomplete on a fake punt. They scored six points over that span.

Payton took the ball away from his best player when he was having his best performance in years. That's why they lost the game.

2. The Broncos Find Their Quarterback

Peyton Manning threw his last pass in the NFL in 2015. Over the four seasons since, John Elway has force-fed big-armed, bad quarterbacks to the Denver Broncos fan base like the devil punishing homer in the Simpsons with doughnuts. Big-armed, athletic quarterbacks are the desire of every NFL team. Everyone wants their own version of Andrew Luck. But Elway, a former NFL quarterback himself, has never been able to evaluate the position he played so well.

From Brock Osweiler to Paxton Lynch to Chad Kelly back to Brock Osweiler to Joe Flacco, it's been one mistake after another for Elway since Manning retired. Drew Lock may or may not be the answer, but he's already closer to it than any of his predecessors.

Lock is another big, athletic quarterback. He ran the fifth-fastest '40 time amongst quarterbacks at the combine, he was notably faster than Daniel Jones of the New York Giants, while measuring in at 6'4" and 16 stone 3 lbs. Lock was a protagonist in the Broncos' shock 38-24 demolition of the Houston Texans. He completed 22 of 27 passes, accounted for 324 yards and had three touchdowns with only one interception and one sack. Lock is a perfect fit in Rich Scangarello's offence. He has already made Flacco expendable moving into the offseason.

Scangarello comes from the Kyle Shanahan coaching tree. He is trying to build a similar style of offence, an offence that relies heavily on play-action and throws to the tight end a lot. In San Francisco, George Kittle is one of the most athletic, versatile tight ends in the league. In Denver, the Broncos just drafted the next Kittle in Noah Fant. Fant is an incredible athlete who didn't look comfortable during the first half of the season but has prospered recently. He's no longer unsure of his responsibilities on each play and has already built an understanding with Lock. Fant had four receptions for 113 yards and a touchdown against the Texans. The touchdown was an especially impressive connection with his quarterback when he ran down the seam. 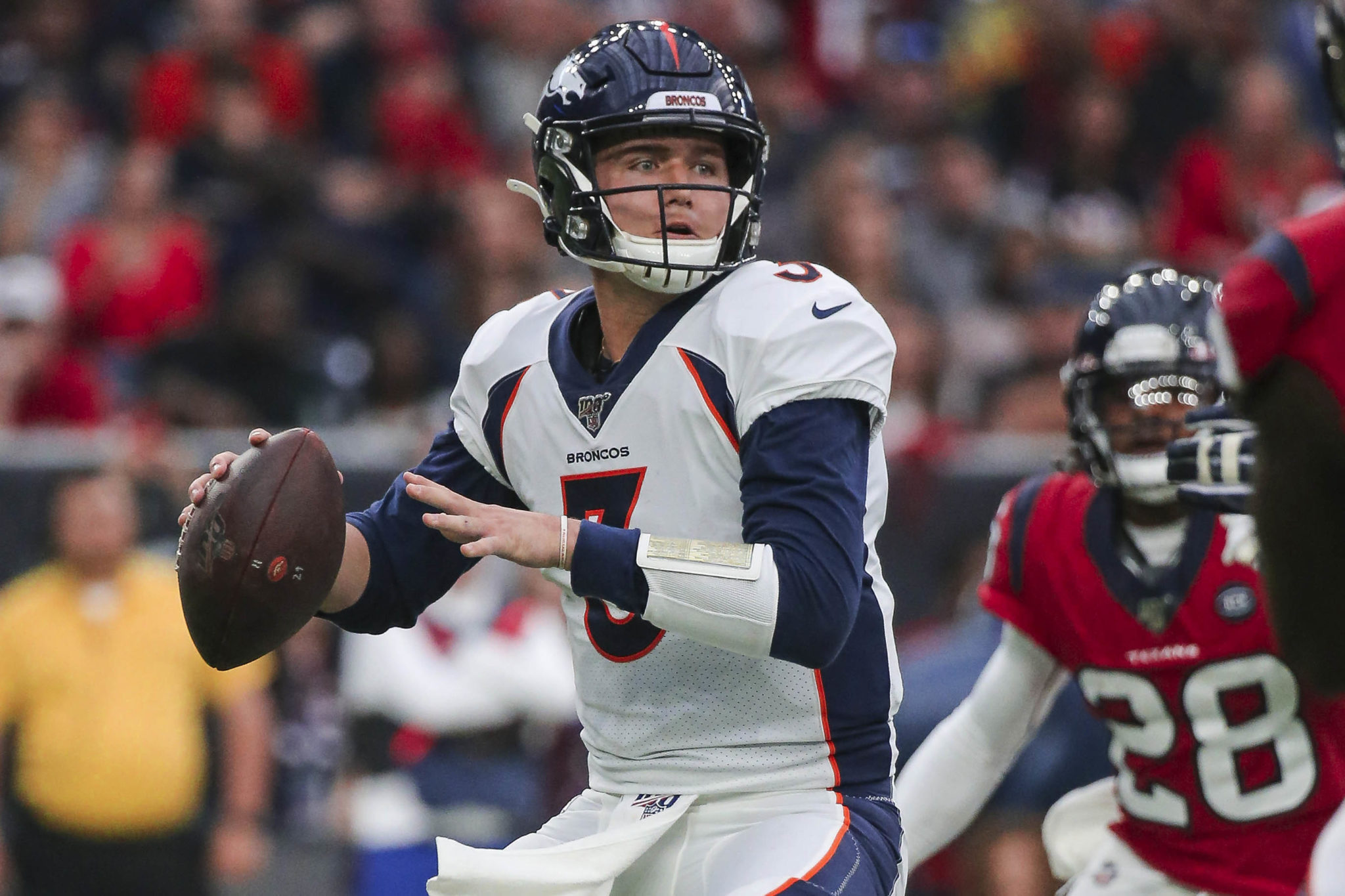 3. The Patriots Are Done

Entering Week 14, the Kansas City Chiefs had the sixth-best pass defence in the NFL and the third-worst run defence. Bill Belichick knew this. We know he knew this because he's the best the coach in the league, but also because he was the one who exploited the run defence in last year's playoffs. The Chiefs tried to rebuild it in the offseason, but they failed. They still can't stop the run.

The Patriots ran the ball 47 times for 177 yards in that playoff game. They squeezed the life from Patrick Mahomes and the offence by limiting how many possessions they could have and forced them to play from behind. Brady could play poorly in that game and still win on the road against one of the best teams in the league. It's hard to see how that's going to happen again this year.

Not only did the passing game look as toothless this week as it did last week against the Texans, the Patriots couldn't even run the ball this week. Sony Michel, Rex Burkhead, James White and Branden Bolden combined for 19 carries and 66 yards. That's 3.5 yards per attempt. Brady had the team's longest run of the game, a 17-yard scramble at the end of the game.

Bill Belichick's brilliance is his ability to put players in position to succeed. He never asks a player to do something he's incapable of doing, he sets them up so their strengths impact the game as much as they possibly can. Belichick can't magically make players more talented. He can't scheme around bad football players. Unless something radical changes, something that's outside of the coaching staff's control, the Patriots won't be repeating as Super Bowl champions.

Ryan Tannehill took a pay cut in the offseason. He had to do so to facilitate a trade to the Tennessee Titans. Now he's the team's starting quarterback.

Tannehill's career with the Miami Dolphins never got going. He dealt with changing coaching staffs, ineffective offensive lines and receivers who constantly dropped passes. Then, during his final year, he was coming off a torn ACL and suffered a shoulder injury that prevented him from throwing the ball deep. Now that he's fully healthy, he's playing outstanding football. He was a key player in the team's convincing victory over the Oakland Raiders, highlighted by a huge touchdown throw to A.J. Brown.

Since taking over as the starter for Marcus Mariota, the Titans are 6-1 and Tannehill has fit perfectly in the scheme. Their consistency on both sides of the ball has been a stark contrast to what came before the quarterback change. Jonnu Smith, Derrick Henry and the offensive line have all turned from weaknesses into strengths over the past seven weeks. They're now set up to win the AFC South.

If they are going to do that, they'll need to overcome the Houston Texans. The Texans and Titans are both 8-5 and due to the NFL's weird scheduling, they play each other twice over the remaining three games. Considering their other game is against the Saints in Week 16, the Titans will likely need to beat the Texans in both games if they're going to make the playoffs.

Army and Navy kick off Bowl Season each year. They face each other at 1 am Saturday night in a primetime slot. Over the next month, every qualifying college football team will compete in their Bowl games. The College Football Playoff semi-finals are included on the 28th of December. #1 LSU will face #4 Oklahoma and #2 Ohio State will face #3 Clemson. Star quarterback Trevor Lawrence and Clemson are the reigning champions.

The Army-Navy game is more about pageantry and celebrating tradition than it is competition. But the players on the field obviously won't feel that way. Navy went 9-2 this year and were ranked 23rd in the nation by the College Football Playoff committee. Army went 5-7 and will be the underdogs. The star of this matchup is undoubtedly Navy quarterback Malcolm Perry who ran for 1,500 yards and 19 touchdowns this year.

Army will be honouring the 1st Cavalry Division with their uniforms. Navy will acknowledge Heisman winners, Roger Staubach and Joe Bellino.

Homophobia, child abuse and painkillers: The making of Aaron Hernandez