Week 15 of the NFL regular season always has the potential to be weird.

In San Francisco, the 49ers had what would presumably be an easy game at home against the Atlanta Falcons. The Falcons have been swept aside by most teams this season. They have nothing to play for, except maybe their head coach's job. It's completely illogical, but the Falcons won the game on the final play in the fourth quarter.

That victory pushed the Seattle Seahawks into the number one seed in the NFC. They are one of many big winners from a crucial weekend in the NFL season.

The Tennessee Titans' improbable run toward the playoffs has been one of the biggest storylines in the NFL over the past two months. But it likely came to an end on Sunday. The Titans played the Houston Texans in Tennessee. Due to the NFL's flawed scheduling process, this was the first meeting of the division rivals all year and they'll have the return leg in Week 17. Both teams were 8-5 entering the game, but the Texans won on the back of an outstanding performance from Deshaun Watson.

Watson threw two interceptions, the first of which was very poor when he completely misread the coverage in the Titans endzone. But he also connected on two outstanding touchdown throws to Kenny Stills and repeatedly found DeAndre Hopkins deep at critical points in the game. The quality of receiver play was the biggest gulf between the two teams on the field. Hopkins, Will Fuller and Stills combined for 14 receptions on 18 targets for 215 yards and two touchdowns. They were outstanding. Meanwhile, Ryan Tannehill's receivers dropped a significant number of passes, including one that preceded a blocked field goal on the opening drive of the game and one that led to an interception in the second quarter. Texans safety Justin Reid caused that interception and explained he could anticipate the route by the receiver's release from the line of scrimmage.

The Titans receivers combined for 14 receptions on 23 targets for 201 yards and one touchdown. The inefficiency of the group was only somewhat offset by A.J. Brown having a big game. Tight End Jonnu Smith contributed 117 total yards, 60 receiving and 57 gained on the extremely rare toss running play to a tight end. Smith also made the most impressive play of the game when he chased down the interception return to prevent the touchdown.

Being one game back with two games to go means the Titans need to win both games to have any shot at winning the AFC South. Considering they play the Saints next week at home then the Texans on the road to close the regular season, it's unlikely.

Any complaints about the NFC East winner stealing a playoff spot now should be put to rest. The Los Angeles Rams are projected to be the seven seed. They might have a better record than the Cowboys or Eagles at that point, but after being demolished by the Cowboys this week, they can't really complain about missing out. The Cowboys were better than the Rams in every way. They even hit a long touchdown pass to former Ram Tavon Austin to rub salt in the wound. Ezekiel Elliott couldn't be stopped. Dak Prescott was accurate and made good decisions. Jared Goff did neither.

Goff is a huge problem for the Rams, he can't elevate anyone around him and needs perfect conditions just to be average. That was emphasized on his interception to Sean Lee, when slight pressure up the middle saw him force the ball into a non-existent window. But what's really concerning is how bad the defence is too. Trading for Jalen Ramsey was obviously a mistake. They gave up two first-round picks, which was too much, but they also didn't have enough talent or discipline in the unit as a whole to contend this season. Adding Ramsey in place of Marcus Peters was an upgrade, but an upgrade that has very little actual impact on the field.

Jason Garrett desperately needed that win. The Eagles had held off Washington earlier in the day. They needed a defensive touchdown on the final play of the game to avoid their third consecutive one-score victory over a three-win team. If the defence can't contain Dwayne Haskins and Terry McLaurin, it shouldn't be able to contain the Cowboys offence either. The only bright spot on offence was Miles Sanders. He had 25 touches for 172 yards and two touchdowns, the highlights being a Third-and-11 draw play run that went for a huge gain and a touchdown reception in the back corner of the endzone on a perfect throw from Carson Wentz.

3. The Seattle Seahawks Take Over the NFC

It wasn't an easy day for the Seattle Seahawks in Carolina. A huge play from Josh Gordon got them off to a strong start as a 13-0 lead was waiting by the end of the first quarter. Kyle Allen kept throwing interceptions but the Panthers still managed to mount enough of a comeback to finish within one score at the end of the fourth quarter. The Seahawks were missing some key players for this game. Their best cornerback Shaquill Griffin, starting defensive ends Ziggy Ansah and Jadeveon Clowney and linebacker Mychal Kendricks were all amongst their inactives. Not ideal when trying to contain Christian McCaffrey.

McCaffrey got his. He scored two touchdowns and had 175 total yards. But the Seahawks won by relying on the three pillars of their offence. Russell Wilson, Tyler Lockett and Chris Carson. No matter what happens around them, Wilson, Lockett and Carson are constants for Pete Carroll's team. In this specific game, Carson was the best of the group as he bullied the Panthers defence. The Panthers have struggled against the run all season long after changing schemes in the offseason. Carson took advantage of their reluctance to match his physicality to the tune of 24 carries, 133 yards and two touchdowns. He has quietly become one of the best running backs in the league. He sets the tone for the offence the way Marshawn Lynch used to.

Wilson then completed 20 of 26 passes for 286 yards and two touchdowns. An efficient outing. The only real blemish in the passing game came when Josh Gordon tried to throw the ball downfield on a trick play. He was intercepted deep in Panthers territory.

The Seahawks have a clear identity. They have a veteran coaching staff, a veteran starting quarterback and, thanks to the Falcons last-second victory over the 49ers, they finished Sunday night as the number one seed in the NFC. If the NFC Playoffs go through Seattle and if Wilson, Carson and Lockett stay healthy, the Seahawks are capable of beating anyone in the NFC. They will meet the 49ers in Week 17 to determine playoff seeding. The 49ers are more talented top-to-bottom, but the Seahawks have the better quarterback and that can go a long way in the post-season.

4. The Chicago Bears Need to Take a New Direction

In the draft after this season, the Chicago Bears won't have a first-round pick. They won't have a third-round pick either. They are owed to the Oakland Raiders as the final parts of the Khalil Mack trade. Trading for Mack was a sign of intent over the short-term. The Bears were supposed to be Super Bowl contenders with Mack, Mitchell Trubisky and Matt Nagy as the pillars of their team. Two years later, the Bears have one wildcard round playoff loss to their name. They won't be in the playoffs this season. It's a colossal failure for the franchise.

The problem is Chicago can't blame anyone but themselves. The Minnesota Vikings will be a playoff team, they're far from a great team this season. The Green Bay Packers will be a playoff team, they're nowhere close to being a great team this season. Realistically, top-to-bottom the Bears are the most talented roster in the NFC North. The problem is Trubisky has never been comfortable in Nagy's offence and Nagy's play-calling has never adjusted to that. Nagy brought an Andy Reid-style of offence to Chicago but not Reid's intelligence or innovation as a coach.

Losing to the Packers in a game where Trubisky threw the ball 53 times and the offence scored 13 points is the perfect way for this season to come to an end. The Packers didn't even need to be anywhere close to their best, Davante Adams had a couple drops making him as unreliable as the rest of Aaron Rodgers' receiving corps on the day.

Trubisky is under contract next season and unlikely to be going anywhere. The Bears need to bring in veteran competition for him since they don't have the draft capital to replace him. Marcus Mariota is the best of the options likely to come available in the offseason. Mariota will fit Nagy's offence better than Trubisky if he retains his job. That will likely only happen if GM Ryan Pace is retained. Pace hired Nagy, drafted Trubisky and assembled the roster. The whole team is his creation. 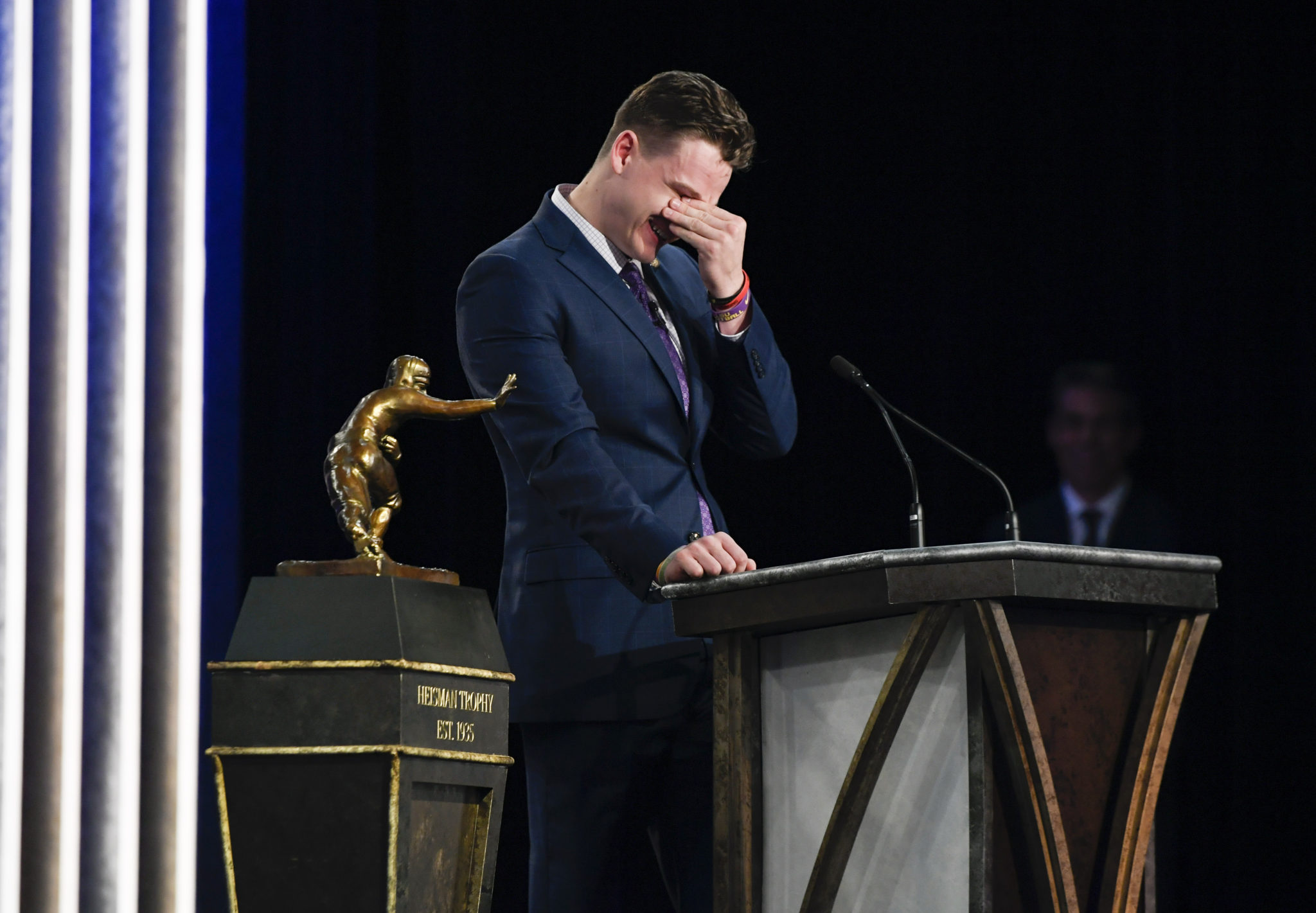 LSU starting quarterback Joe Burrow became the most popular Heisman winner in history on Saturday night. He received 97.6% of the maximum possible votes, breaking Reggie Bush's record of 91.8% from 2005. Burrow also set the record for the highest percentage of first-place votes in Heisman Trophy history, garnering 90.7%. Second-closest is former Ohio State quarterback Troy Smith who had 86.7% in 2006. Winning the Heisman is a reflection on how good you were in college, but it only means that you were the best player in college that year. It's not relevant to NFL projections.

Smith is a great example of that because he never became an effective NFL quarterback and was drafted in the fifth round. Burrow is expected to be the first quarterback taken in the draft. He is already being pencilled in as the Cincinnati Bengals starter next season. He'll get to play for the cheapest organization in football and deal with Lamar Jackson for the next decade, quite the reward for his success at LSU.

But the NFL is still a distance away for Burrow.

LSU have a semi-final matchup with #4 Oklahoma to look forward to. Burrow is the primary reason they finished the regular season as the top-ranked team in college football. He completed an outrageous 77.9% of his passes and averaged 10.7 yards per attempt with 48 touchdowns and only six interceptions. Completing passes that often and averaging that many yards per pass attempt are cartoonish. If you did that in Madden you'd need to change the difficulty settings. It's like being Joe Canning but those numbers suggest his wide receivers are also Joe Canning, so LSU are some kind of team of Joe Cannings where every player is bigger and more skilful than their opponents each week. Burrow and the LSU offence were unstoppable against ranked teams and unranked teams alike. They are 13-0 and won the SEC Championship by 27 points against Georgia. If they don't win the National Championship it will be a major shock.

On a side note, Burrow is a senior so he is definitely going to the NFL next season. He got the greatest entrance video of any senior on his way out.

Homophobia, child abuse and painkillers: The making of Aaron Hernandez

NFL Playoffs: Five Takeaways from the Divisional Round