Sean Cronin is breathing down Rory Best’s neck for a position in Ireland’s starting fifteen, ...

Sean Cronin is breathing down Rory Best’s neck for a position in Ireland’s starting fifteen, according to Bernard Jackman.

"He’s scored forty tries between his Leinster and Connacht career already, I mean there’s a lot of top class wingers who haven’t got that try scoring ratio," Jackman told Tuesday’s OTB AM.

"I think Rory, his best years are behind him, but against the All Blacks in November, he just lay down a serious marker again to say he is the man in possession [of the no. 2 shirt] and he won’t be budged."

There’s no shortage of talent behind Cronin, with Niall Scannell next in the pecking order, after making two starts for Ireland Down Under in June.

Ireland are well-stocked in the props also, with youngster Andrew Porter having already amassed 11 caps for his country, providing Schmidt with plenty of depth.

He’s scored forty tries between his Leinster and Connacht career already, there’s a lot of top class wingers who haven’t got that try scoring ratio 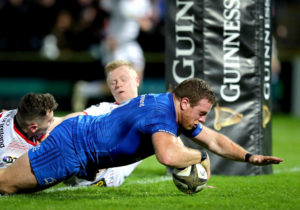 Sean Cronin has made a habit of scoring tries over the past year.

Even outside of Joe Schmidt’s immediate plans are a number of players that Jackman identified that would likely impress on the international stage.

"I really like Denis Buckley in Connacht to be honest but he hasn’t really been in Joe’s squad, so he’s probably unlikely to bowl through."

Many fans of the western province feel Buckley has been hard done by in not getting an Irish cap, although he has made appearances for the Emerging Ireland side. A couple of injuries at prop could see Buckley work his way into Schmidt’s plans.

Jackman gave a list of nine players, each the top three in their positions which featured all the usual suspects, but competition leading up to the world cup is fierce and outside the likes of Best, Healy and Furlong, no one’s position in the squad is safe.

"James Cronin was in form about a year ago, but Kilcoyne has pushed in ahead of him. There are guys outside those nine players that show Ireland have good depth, but those are the front runners for me." 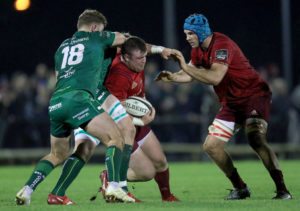 Musnter's Dave Kilcoyne made an appearance off the bench against Connacht last weekend.

When Anthony Foley and Jonah Lomu faced off | Sean Fitzpatrick