As part of the OTB Gold series, Off The Ball is bringing you selected articles from classic inter...

As part of the OTB Gold series, Off The Ball is bringing you selected articles from classic interviews of ours. This week...

Women were not officially allowed to run the Boston marathon until 1972, but Kathrine Switzer managed to compete as a numbered entrant five years prior, in 1967. She has since become a National Women’s Hall of Famer. Switzer told us her incredible story on OTB Gold in June.

“This was the moment I went from a girl to a grown woman. When I made that decision to finish the race.” Switzer told Joe Molloy on Off The Ball.

At this point, I realised other women would be there if they only had opportunities... I realised ‘I'm going to change the system’, and that’s when it became political to me”.

Switzer was studying journalism at Syracuse University. She wanted to be a sports journalist, as it seemed to be her only way to work in the sports industry. A woman becoming a professional athlete seemed impossible at the time.

“I knew I was never going to be allowed to be an athlete. I had been running, I had been playing field hockey, but that was going to be it. Once you got to university, it was all over for girls.” said Switzer.

She asked the coach of the men’s cross-country team if she could participate with them, as there were no girls' sports teams.

Switzer said, “He died laughing. He said ‘you can’t run officially on the team, it’s against the  NCAA (National Collegiate Athletics Association) rules in collegiate sports, but you can come out and work out with the team if you want to, we would welcome you’ and that was a joke because he never thought I would show up, but I did”, Switzer explained.

The Syracuse University mailman, who had won the Boston marathon 15 times, was excited about seeing her out there and took Switzer under his wing. His stories of the marathon inspired her to try to take part in it.

The idea of a woman competing as a numbered entrant of a marathon seemed ridiculous at the time, so she had to convince him by running the distance of the marathon, which led him to help her sign up for it.

Registered under the name ‘K.V Switzer - which she claims is because her name is misspelled on her birth cert - although the gender-neutral name did hide her gender.

Switzer explained: “Arnie said, ‘you need to officially sign up, this is a serious race’... I was full of confidence; I was very excited. I knew I was going to be noticed, but Arnie said, ‘I’m proud of you’”.

The inconceivable sight of a woman as an official contestant was welcomed by other competitors.

The unnoticed maverick was making history without issue, before an official, Jock Semple, attempted to physically remove her from the race, as Switzer explained to Off The Ball: “The co-race director lost his temper. He was getting teased by the journalists about a girl being in his race... he just grabbed me by the shoulders and spun me back and he said ‘get the hell out of my race and give me those numbers’”.

Switzer’s boyfriend Tom Miller pushed him to the ground on the pavement beside them. This was pictured by the press and has become a famous image. Switzer explained, “[he] gave him a shoulder charge and sent him flying and out of the race, and Arnie screamed ‘run like hell’... at the time it was terrible, because it was humiliating and embarrassing”, explained the National Women’s Hall of Famer. 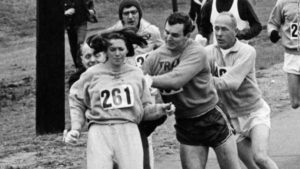 The rebellious athlete then finished the race in four hours and 20 minutes and, in doing so, left a lasting impact on the attitude towards women in sport, explaining: “First of all, I didn’t think it would be a symbolic move for women’s rights at all, I don’t think I was that mature.”

Although she was unaware at the time, the scale of Switzer’s achievement was enormous. The reaction to her achievement was even greater. Her stance against the laws for women, and her ability to complete the marathon was a source of belief that women could and should be able to compete in marathons.

“I thought it was women’s fault that they didn’t understand how wonderful sports was, and that if they had a lack of opportunities, it was somehow their own fault. In my heart, I just really loved running.” Switzer told Off The Ball.

Semple had her disqualified from the race, and she was suspended from the AAU (Amateur Athletic Union), before being allowed back in, due to the social revolution that she had sparked.

Switzer then worked as part of the system to change beliefs and rules about women being able to compete in marathons. Women were not allowed to run races of more than 1,500-meters at this time.

“Being kicked out of the athletic federation was like being excommunicated from the church. That meant no more sports for you”, said Switzer.

Eventually, Switzer was allowed back into the federation and became a global icon in women’s sports. “More and more people, women especially, would write to me and say that if I would take part in a race that they would come too”, said Switzer.

She went on to become the women’s winner of the 1974 New York City marathon. She then became a commentator and author, which led to her receiving an Emmy.

After speaking with us in 2014, the former marathon runner launched a non-profit organisation called ‘261 Fearless’ the following year, which aims to promote women’s health and overcoming obstacles through running and has become a global movement.

Without doubt, Kathrine Switzer changed women’s sports more than she could have ever imagined she would, by simply running a marathon.

You can check out Kathrine Switzer’s full interview with Off The Ball here:

Irish Olympians give you five tips for running a marathon