Former Ireland winger Stephen Hunt joined Ger and Eoin on OTB AM on Monday to look back at the St...

Former Ireland winger Stephen Hunt joined Ger and Eoin on OTB AM on Monday to look back at the Stephen Kenny appointment while considering what might be next for Robbie Keane.

It was put to Hunt that the FAI should be concerned about upsetting one of the legends of the Irish game.

Having played alongside Ireland's record goalscorer, Hunt says Keane is experienced enough to know the score.

'Kenny hasn't got that long of a contract to carry a coach if he didn't want Robbie Keane as a coach...'

"Robbie is bright enough to realise sometimes football is a business and decisions are made", said the ex-Reading and Wolves wide man.

"Stephen Kenny had a decision to make about who he wants to have on his coaching staff. He needs it to be right for him."

Hunt reminded viewers that Kenny doesn't have long in the job, saying, "He hasn’t got that long of a contract to be able to carry a coach if he doesn’t want a coach.
"Stephen has made that decision, in terms of having Keith [Andrews] and Damien [Duff] with him, that needs to be respected as well.
"It’s a big decision and a strong decision. He wants to do it his way and that’s fair enough.
"You don’t get that many opportunities to manage your country." 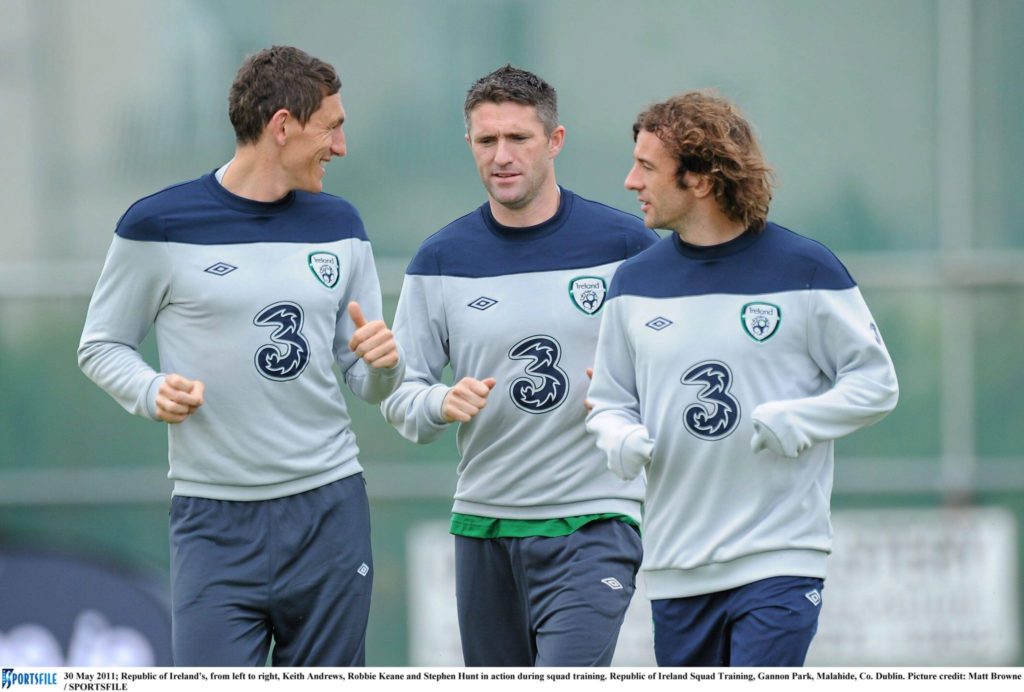 30 May 2011; Republic of Ireland's, from left to right, Keith Andrews, Robbie Keane and Stephen Hunt in action during squad training. Republic of Ireland Squad Training, Gannon Park, Malahide, Co. Dublin. Picture credit: Matt Browne / SPORTSFILE
While Keane has not been kept on by Kenny, Hunt reckons the Middlesborough assistant coach will have a plan to deal with this fairly minor setback, career-wise.
"Robbie will know which way he wants to go and what he wants to do", says Hunt. "You learn from your mistakes sometimes as you go along."
Hunt reckons there is no set formula to becoming a manager: "Nobody can see how you are going to be a manger, be a coach.
"You go along with it, do the best you can, prepare as best you can to be. After that, you need a bit of luck.

Knows what he wants

Hunt reckons Keane will be happy with his career progression so far, "Robbie will know what he wants to do, he’s already coaching at a Championship team.
"If you're on the coaches ladder and you get a job like that, you are delighted to get it. You're up and running as a coach."
The impact Keane will have had on the Ireland set-up is questionable.
Stephen Hunt has seen the Mick McCarthy/Terry Connor operation at close quarters.
"His Ireland set-up was definitely a bonus for allowing himself to gain more experience under Mick and TC.
"I’ve known Mick and TC a long time and they very much come together. TC is very much Mick's coach, so it’s very difficult to see anyone else having a big impact (on their thinking).
Whether he had any input, it is not really relevant according to Hunt as the exposure to such an experienced coaching unit will have been of massive benefit to Keane's own coaching career.
"Robbie will have learned a lot even from the 18 months with Ireland", said Hunt.