"I am not a racist" - Austria's Arnautovic explains goal celebration

Marko Arnautovic insists he is not a racist, after the North Macedonia football federation compla...

"I am not a racist" - Austria's Arnautovic explains goal celebration

Marko Arnautovic insists he is not a racist, after the North Macedonia football federation complained about his goal celebration.

The Shanghai Port forward - formerly of West Ham - scored Austria's third goal in a 3-1 win over North Macedonia in their Group C encounter in Bucharest.

Questions were asked regarding Arnautovic's celebration, after he was seen to unload a torrent of abuse towards North Macedonia defender Ezоan Alioski.

On Facebook, they wrote, "The Football Federation of Macedonia strongly condemns the nationalistic outbreak of Austrian representative Marko Arnautovic, after a goal scored in yesterday's match with Macedonia addressed to Macedonian representative Ezdjan Alioski. 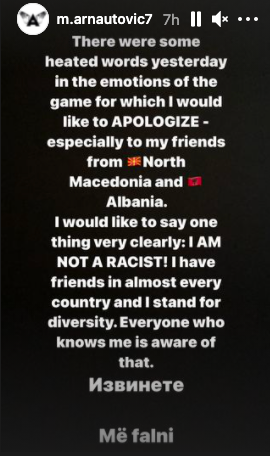 "At the same time we inform you that we have submitted an official letter to UEFA demanding the harshest punishment for Austrian representative Marko Arnautovic.

"As a 'House of Football' we are always against nationalism, discrimination and all other forms of insults and outbursts that are not in the spirit of football and values that we all stand together.

"We will always stand up and defend the interests and dignity of Macedonian national players wherever they perform."

Arnautovic - who has a Serbian background - has apologised for his outburst.

In an press conference on Monday, the 32-year old said, "There was a verbal argument on both sides.

"I have friends all over the world.

"I was happy and of course some words came my way that hurt me.

"It was an emotional argument. I can tell them that I feel sorry for all those who felt offended.

"I want us to forget what happened, such things have no place in football."

While writing on Instagram, Arnautovic said, "I would like to say one thing very clearly: I AM NOT A RACIST! I have friends in almost every country and I stand for diversity.

“Everyone who knows me is aware of that.”

McGinn insists Scotland will go for three points against England