Richard Keys on England unrest: 'I knew this would happen'

Broadcaster Richard Keys has condemned the scenes which have emerged of fan unrest around Wembley...

Richard Keys on England unrest: 'I knew this would happen'

Broadcaster Richard Keys has condemned the scenes which have emerged of fan unrest around Wembley stadium in the build-up to the EURO 2020 final.

With England in their first major final since the 1966 World Cup, it has been reported that a number of fans made their way into the stadium without tickets.

Although these claims have been disputed by Wembley stadium officials, there has been no uncertainty around the scenes of unrest and outright aggression in the build-up.

England fans in the stadium telling me a lot have people have got in without tickets and trying to occupy seats. The official note earlier was that hasn't happened but many fans disputing it.

"I've made myself probably very unpopular back in England," he stated, "[but] was this not predictable? Did we not expect to see this? I did.

"Right now I'm wishing this final was being played in Romania, I really am. I mean, anywhere else that could have dealt with it better."

Grimly predictable scenes in England. @richardajkeys wishes that the final was NOT played at Wembley today. #beINEURO2020 #EURO2020 #ITAENG

Elsewhere, former England international Rio Ferdinand appeared to be hit in the head with a beer can as he made his way into Wembley Stadium on Sunday evening.

With England fans making their presence felt across London ahead of Sunday's European Championships final between England and Italy, Ferdinand appears to have been a casualty of all the excitement.

One of the BBC analysts for this evening's clash, the former Manchester United defender seems to have been caught up in some of the madness entering the stadium. 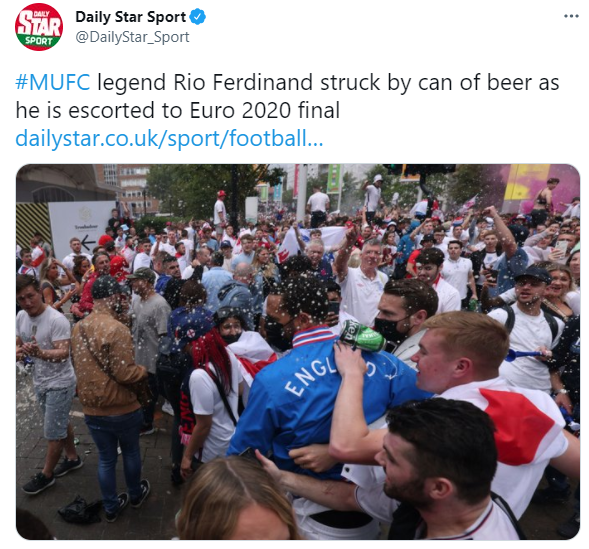