Aaron Kernan joined Joe Molloy on Monday's Off The Ball to talk about Armagh's victory over Down on Sunday.

The former Armagh senior admitted how he was not expecting the high scoring game that took place in Newry. He explained that the first half was a "drab" with a low amount of scores.

However, he said that after the 40 minute mark, both teams "cut loose and were willing to take risks" which made the game a "spectacle" according to Kernan.

He went on to praise Andrew Murnin who came on halfway through extra-time, after recently recovering from a knee injury last year. Kernan mentioned how bringing on Murnin was a "last throw of the dice" for Armagh, and that without Murnin's "presence of mind," Armagh would not have scored enough to win the game.

Following Cavan's win over Monaghan, Kernan thought that while "Cavan played very well, Armagh have a lot more in them" and will win the semi-final on Saturday.

When reviewing Cavan's victory over Monaghan, Kernan said Cavan were the aggressors who dictated the pace, compared to the Monaghan side who were panicked by main man, Conor McManus' lack of scores in the first half. 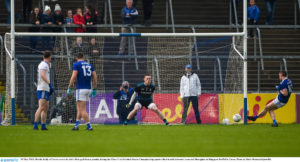 He complimented Cavan on their organization and performance on Saturday, however, a fifth-minute penalty to Cavan seems to have given them the upper hand for the game and Kernan showed his skepticism towards the referee's decision:

"Not a chance was it a penalty, as far as I'm concerned. Definitely it was an extremely harsh penalty. I wouldn't be too happy if it went against Armagh, that's for sure."

Kernan finished by saying that while there are a lot of young players emerging from Armagh, he doesn't feel that they are good enough to beat Donegal or Tyrone at this stage.

You can watch the full chat here: