Donegal GAA to vote against both championship proposals

Donegal delegates will be voting against Proposals A &amp; B at tomorrow's GAA Special Congress a...

Donegal GAA to vote against both championship proposals

Donegal delegates will be voting against Proposals A & B at tomorrow's GAA Special Congress at Croke Park.

The County Executive met on Thursday evening and have decided against both motions to change the structures of the football championship.

It’s understood Donegal believe there is a requirement for change but the board feel the current motions don’t reach the level of change needed to improve the championship going forward.

Following confirmation that Donegal GAA will oppose proposed changes to the structure of the football championships at tomorrow's special congress, the County Board has released the text of a letter sent to all clubs outlining the reasons for the decision.

"Last evening, Thursday October 21st was the first opportunity for Coiste Bainistiochta to discuss the motions on the Clár of the Special Congress tomorrow Saturday. Our meeting could only be arranged after a briefing of County Treasurers at a National County Treasurers online meeting on the financial implications of the proposed motions on Thursday last October 14th, the County Chairpersons and Central Council Delegates were invited to a similar online briefing on Monday this week (October 18th) and this was followed by an in-person meeting of the Ulster County Chairpersons, County Secretaries and Central Council Delegates on Tuesday (October 19th) in the Armagh City Hotel."

Donegal one of several Ulster counties to go against the proposals with Fermanagh, Derry and Armagh already coming out against them.

Down is the only Ulster county to pledge its support to the league-based Championship option, with the rest of the northern province expected to vote against it.

In Leinster, Meath, Longford, Kildare, Wexford, and Louth joined Westmeath and Offaly's delegates have all been mandated to support Proposal B.

Laois and Waterford's delegates have a free vote but are likely to vote in favour of change while Kerry and Limerick's delegation will also decide on the day.

On Wednesday afternoon Proposal B gained the backing of GAA President Larry McCarthy and Director General Tom Ryan, though they won't be lobbying delegates ahead of the vote.

McCarthy has urged counties to be bold while Ryan says there's a clear appetite for reform of the All-Ireland Football Championship.

Connacht secretary John Prenty, who was a member of the Task Force which brought forward Proposal A and B, has come out strongly against them - saying it would be "dangerous" to vote them in.

Galway have formally announced that their four votes and a Central Council vote will go no but Sligo, Leitrim and Roscommon will be backing Proposal B on Saturday.

A 60% majority would be required for any change and it's important to note that the county delegates only make up around half of the total ballot.

Central Council, Provincial Councils, Overseas Boards, and past presidents make up a sizeable chunk of the votes on offer while the Gaelic Players' Association holds two votes. 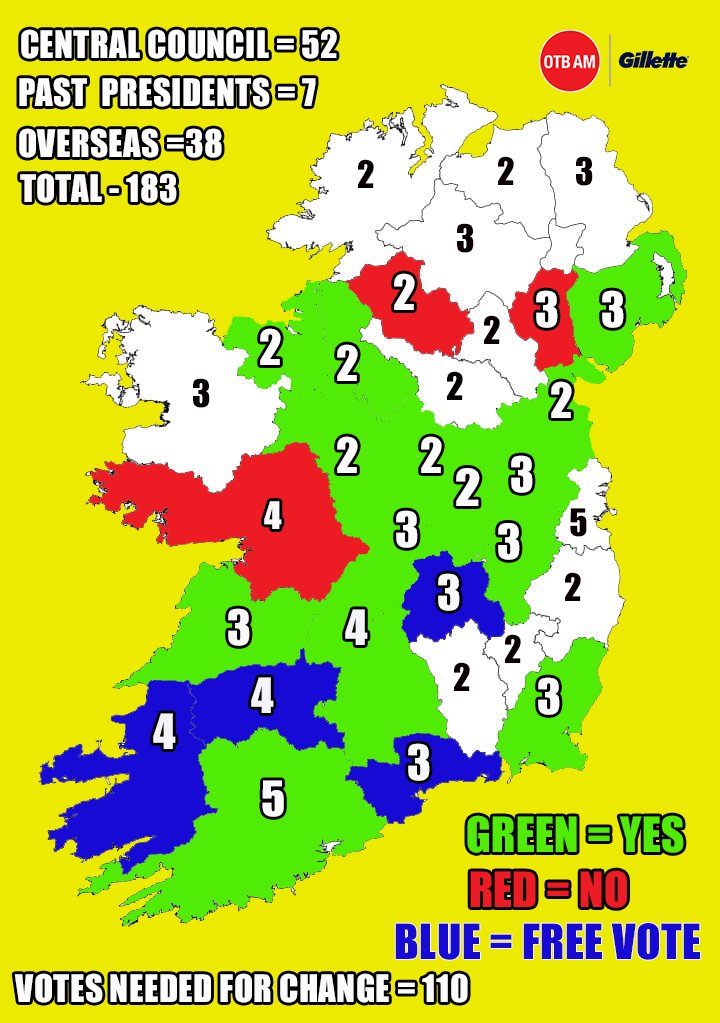 JASON SHERLOCK: Why I’m in favour of Proposal B

LISTEN: GAA Late Night and The GAA Report - all your Championship reaction!