Off The Ball are searching for Ireland's greatest sportspeople - and we need your help to sculpt ...

Off The Ball are searching for Ireland's greatest sportspeople - and we need your help to sculpt the sporting Mount Rushmore for each county in the country!

For the next two months on OTB AM, we'll be speaking to an appointed representative from each county to decide on their Mount Rushmore.

If you want to have your say, we'll give you the chance to cast your vote, or send suggestions into us.

We're starting with the Mount Rushmore of County Mayo. Who are the four sports stars that should be sculpted into greatness on a rock outside of Knock?

Nathan Murphy is joining Ger and Eoin on Monday's OTB AM to discuss!

There's the fabled All-Ireland winners of 1951, the Olympians and Basketball king-pins. You've got your centurion footballers, standard-setting GAA stars and so much more. 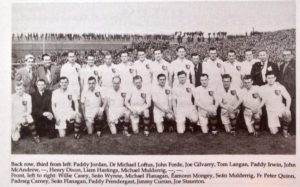 From Westport to Ballina, Achill Island through to Ballyhaunis, and Charlestown to Bellmullet - the Mayo Mount Rushmore needs your vote.

It can be an icon, a local star, a forgotten story from years ago. Perhaps it's one of your diaspora, or a blow-in who changed the course of history in your county?

So who should be on the Mount Rushmore of Mayo sport?

Get in touch and join us on Monday's OTB AM to discuss.

Admittedly, some counties will find it tougher than others to pick just four sports stars for their Mount Rushmore; Cork - we're looking at you.

Try and tell us who loses out from Roy, Sonia, ROG, Ring, Buckley, Irwin, Russell, etc? That's an argument for another day!

We're live from Skibbereen tonight. A Corkonian has sent us in this Mt Rushmore of Cork sporting greats. Who'd make your county's? #OTBSkibb pic.twitter.com/C2mQJd2guu

If you need some inspiration - check out Adrian Barry's attempt to choose his sporting Mount Rushmore for his beloved Westmeath back in 2018! (yes - we've been banging on about this for a while!)

"It's my Mt. Rushmore and Paidi O'Se is an honorary Westmeath man"

Adrian's Mt. Rushmore of 'Westmeath' greats has more than a hint of Kerry in it pic.twitter.com/2UkPTUqtfU

We'll be going one-by-one for the next few weeks on OTB AM, as we look to sculpt a Mount Rushmore in every county in the country.