It may not quite exorcise the demons of 2016 but, for Mayo's Rob Hennelly, yesterday's National Football League final defeat of Kerry in Croke Park is sure to the source of some satisfaction.

"I have to say he has a serious amount of resolve," noted Anthony Moyles of the Mayo 'keeper on Monday's OTB AM, "he really does."

"I think he loves being a goalkeeper first of all, he really enjoys it and is really into it.

"He's a guy who I'd say constantly practices and practices, looking for different things when he's away from regular training.

"His resolve over the last few years has been savagely high."

I'd say there were plenty of dark days for him, but he's come back at it and it's brilliant to see 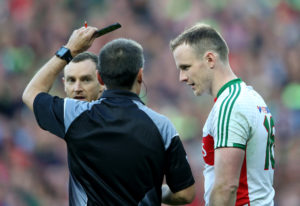 Infamously black-carded during Mayo's All-Ireland final replay defeat to Dublin in 2016, Moyles explored the unquestionable challenges that Hennelly would have faced in the aftermath of such a high-profile error.

"We spoke about the hurt that has gone with Mayo fans," Moyles stated, "well a lot of that ire from Mayo people would have been pointed at him."

"It's a moment that can really play on your mind and play on your career, and it's very easy just to say, 'I'm done here, I don't need this in my personal life.'

"From the outside looking in we'd all say Mayo people are great and all great fans, but I'm sure there are a certain element who absolutely destroyed him.

"I'd say there were plenty of dark days for him, but he's come back at it and it's brilliant to see."

Conceding that such behaviour was common in "most counties," the former Meath man was not exempt to rough treatment.

"I used to get it so regularly that it didn't really bother me," laughed Moyles.