President-elect of the GAA Larry McCarthy admitted his victory had not yet sunk in after last night’s dramatic vote at Congress.

The New York candidate was elected on the fourth count, beating Jarlath Burns who led by 17 votes after the first count, following the distribution of Jerry O’Sullivan and Mick Rock's votes.

McCarthy was speaking to Off The Ball’s Máire Treasa Ní Cheallaigh last night and spoke about his delight at winning the election.

A tough job awaits the overseas candidate as the 40th GAA President but the Cork native was upbeat about the challenges he would face. 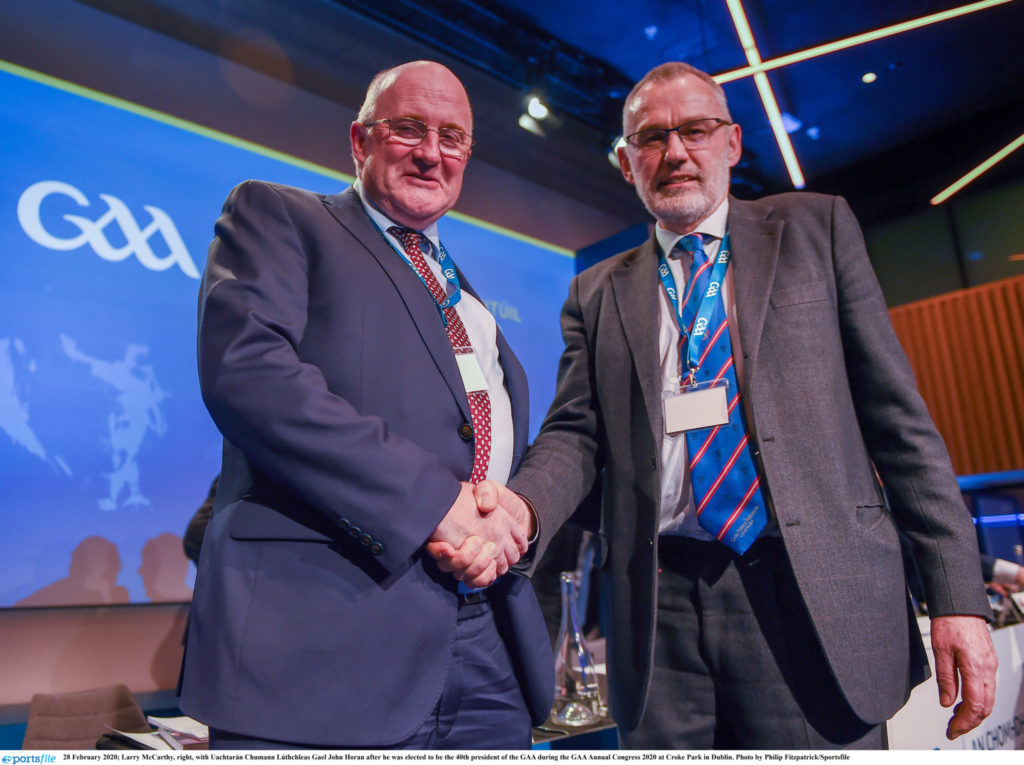 Larry McCarthy, right, with Uachtarán Chumann Lúthchleas Gael John Horan after he was elected to be the 40th president of the GAA.

“We’re never going to satisfy everybody but we need to just keep trying to balance the tensions that exist and do a good job. And we do.

“Very few organisations have two elite games, manage it and then do all the grassroots work as well.

“Most other sports organisations around the world have hived off their elite sports and say, ‘Go over there and play and we’ll take care of everything else.’

“That’s not us. That’s not us at all and we do this so well. But there are tensions. There are inevitably going to be tensions in an association like that. I

“It’s just keeping a balance in those tensions that I think is the biggest challenge,” McCarthy commented.

Among the most pressing issues in the GAA at the moment is that of the congested fixture calendar but McCarthy believes the pressures will be soon somewhat relieved.

“One of the things that came out of the fixtures review committee was that they identified five particular weekends in June, July and August for club only activity.

“They’ve moved other stuff, for want of a better word, to accommodate that. I think that will reduce a lot of tension with the club players. In addition, you’re going to have time at the start of the year and time later in the year.

“So once we give them certainty of fixture they’ll be able to organise their GAA lives and their personal lives around that. I think it will ameliorate a lot of the tension that exists,” McCarthy said.

The president-elect has been with New York GAA for quite some time, serving as secretary for six years and chairman for three years, but intends to return to Ireland for his three-year term as GAA President.