McIlroy: 'If I can keep responding to those mistakes like I did today I'll be right there'

Rory McIlroy believes his ability to bounce back has been at the root of his successes this season after his second round 69 (-5 overall) saw him remain in the top five at this year's US Open at Pebble Beach heading into the weekend.

The 30-year-old followed up Thursday's three-under-par 68 with another excellent 18 rounds on the US west coast, leaving him four shots adrift of leader Gary Woodland (-9) ahead of Saturday's play.

McIlroy was among the day's late starters on Friday afternoon in California and closed the gap on Thursday's overnight leader Justin Rose with birdies on the fourth and seventh holes to leave him just one shot adrift of the lead.

But down the stretch the Northern Irishman undid all his good work - which at the time included another birdie on the 11th - with a bogey-double bogey run on the 13th and par-five 14th.

"Obviously very important to do all that hard work over the first 12 holes, and then to lose it in -- in two holes in 13 and 14, was disappointing," he said after his round.

"You know, 13 was... I wasn't disciplined enough with my second shot. I was trying to hit something into that back right corner of the green when I've really been preaching middle of the greens all week.

"I was feeling good about myself at -6 and felt like I could squeeze a couple more out of the round. The last couple of holes and maybe get the lead going into the weekend. I bogeyed that, which is fine, you're going to make some bogeys around here.

"But it was just the wedge shot on the 14th. I hit a club that I knew could pitch pin-high, but probably not very much further than pin-high, and then anything right of that pin, pitching there is going to come off the green.

"I saw [on Friday] morning what happened to Tiger, what happened to Jordan. I knew that that could happen. When you're standing there with a wedge in your hand, the ball is above your feet on the fairway, you don't really want it going left.

"It's very easy to tug it just slightly off the hill and go into that heavy rough on the left just off the green." 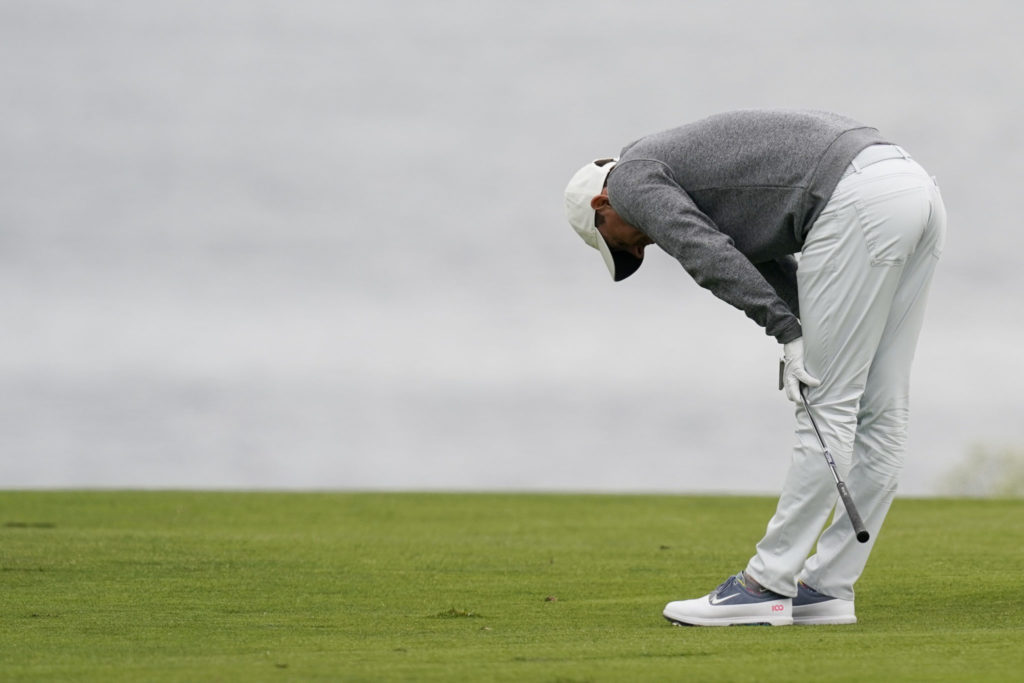 Battle Hardened: Rory McIlroy had to work hard for his second round 68 at Pebble Beach.

McIlroy went on to revive his round with birdies on the 15th and 16th holes to bring his score back into the 60s and leave him among the chasing pack heading into moving day.

"I bounced back well. I didn't hit a great tee shot off the 15th, but the bunker shot, the fairway bunker shot sort of turned everything around. It was nice to see a shot like that and roll the putt for birdie. And then it was sort of a bonus holing from the back of the 16th, as well.

"On 15, 16, there are short irons in your hand, and you've got the 18th, as well. I didn't quite get those three shots back, but -2 for the last four after what happened, very pleased with. Really happy with my position going into the weekend."

McIlroy tees it up at 10.23pm Irish time this evening alongside Chez Reavie. The Holywood golfer looks to end his major drought, with his last success coming at the 2014 PGA Championship.

Join Off The Ball for top class golf, a gala dinner and one of our best ever roadshows, as well as a bit of winter sunshine this November 17-23rd in Abu Dhabi. The inaugural Off The Ball Open will feature golf around the spectacular Yas Links and The National, there’ll be a prize giving gala dinner, a golf clinic from Peter Lawrie and the OTB lads will broadcast live each day before finishing the week with a full roadshow featuring Kevin Kilbane, Kieran Donaghy and Peter Lawrie. Secure your place by paying your deposit now – details here.

Golf Major Championship Off The Ball Rory McIlroy US Open