All this week, OTB AM caught up with some of the Irish athletes turning heads on the world stage.

In a year which has thrown up many reasons for Irish sports fans to be optimistic, the successes in Irish athletics may have gone somewhat unnoticed.

A terrific showing at the European Cross Country Championships in Dublin last weekend capped a promising 2021 for Irish athletics.

As attention turns to Paris 2024, there is plenty of reason to get excited about Ireland’s bright young runners.

All this week, OTB AM caught up with some of the Irish athletes turning heads on the world stage.

Olympian Ciara Mageean went into the year hoping to generate momentum ahead of the Tokyo Games.

However, she explained that 2021 proved far more difficult than she had anticipated.

“Whenever I reflect back, my season was a difficult one. 2021 is certainly gonna be a year I’ll look at with a bit of frustration and disappointment,” Mageean admitted.

“Obviously, with the start of the year and my coach Jerry Kiernan’s death, that was something that hit me very, very hard; it took a long time to process.”

“Then I focused on the outdoor season, and tore my glutes at the end of March - I don’t even know if many people know about that - which I had to work hard to get through and miss a little training.”

“Then, in the immediate run-up to the Olympics, I tore my calf. It was very strange; having never torn anything before, my left leg seemed to want to sabotage me this year.”

"Dwell on negatives, and you never find joy in those moments"

“It was very disappointing to know that I was in good shape and wanted to put my best feet forward and represent my country at the Olympics. For that to be snatched away was hard to come to terms with.” Mageean explained.

“But I’ve processed it now, and realised that life throws many negatives at you. If you dwell on the negatives, you’ll never really be able to find any joy in those moments.”

On OTB AM, he recalled the horrific bike accident which nearly cost him not only his athletics career, but his ability to walk.

“I was just going out on my bike,” Kilrehill began. “I was about half a mile away from my house, and, being young and foolish I suppose, I went flying down this hill that I shouldn’t have been going down.”

“When I got to the bottom of the hill, I saw the car. I didn’t actually hit it, but I got such a fright when I saw it that I hit the brakes.”

“I went flying over the handlebars anyways. After that, it was lights out.”

Kilrehill: "If that was broken, it was likely that I’d never walk again"

“I had a C1 fracture in my neck,” Kilrehill went on to reveal. "They said that if that was broken, it was likely that I’d never walk, or maybe even talk, again. It’s weird even saying that now.”

“That first run back was class, because just sitting on the couch, not even able to play football with the lads, it just didn’t suit me.”

“One time, I was caught playing football when I shouldn’t have. I thought since I was back running, I’d be fine.

“So, I remember playing 5-a-side outside with the lads, and everyone roaring at me to cop on. Because if I got hit in the back at all… so it was stupid, but I suppose it was too tempting.” 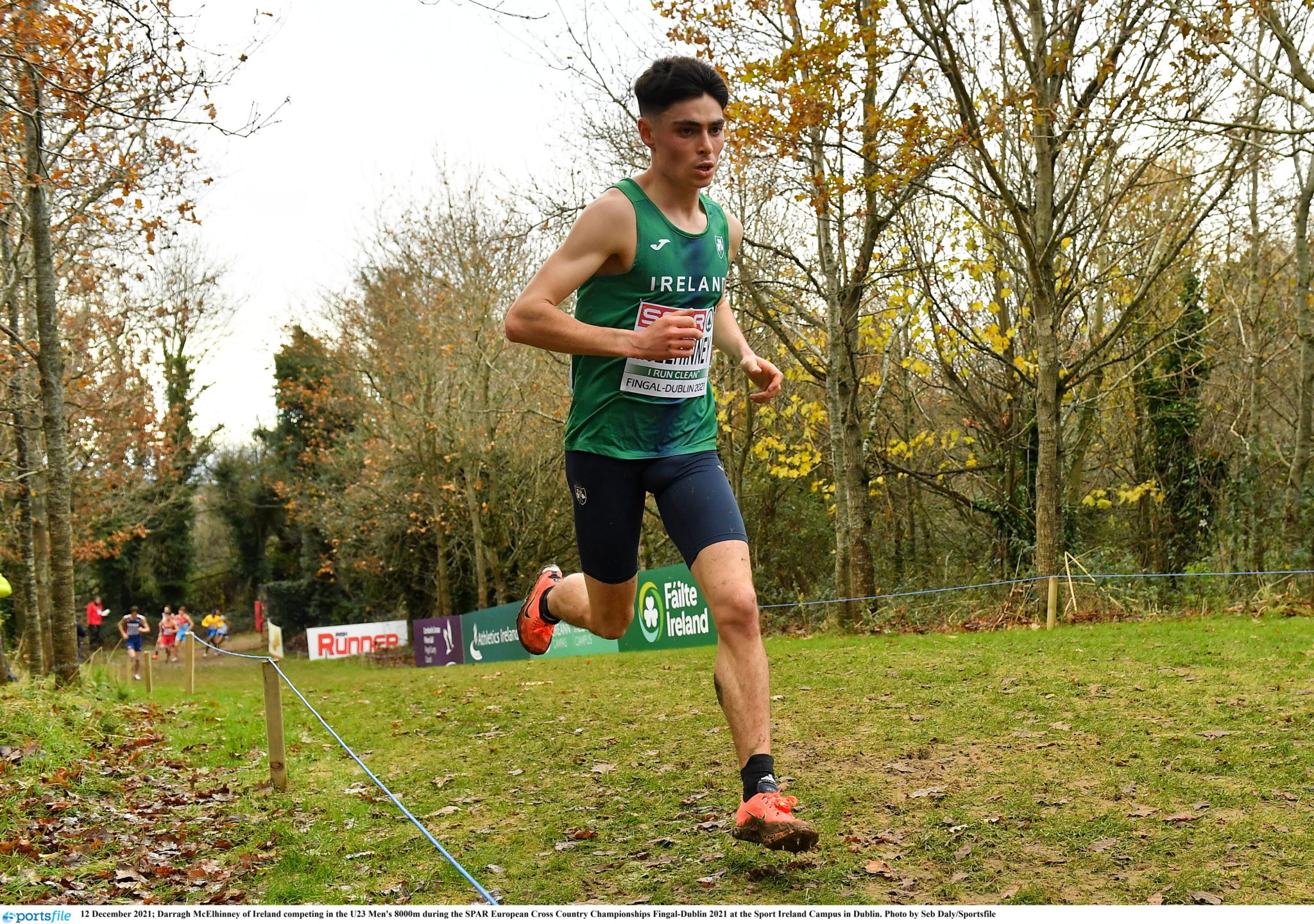 12 December 2021; Darragh McElhinney of Ireland competing in the U23 Men's 8000m during the SPAR European Cross Country Championships Fingal-Dublin 2021 at the Sport Ireland Campus in Dublin. Photo by Seb Daly/Sportsfile

Kilrehill’s teammate Darragh McElhinney, who also picked up an under-23 individual silver last weekend, joined the show on Friday.

McElhinney discussed the factors that come into play when an athletics prodigy considers moving to a US college for development.

“It’s a decision for any young athlete. It’s debated a lot; which is the better opportunity or path to take?”

“I think, essentially, it comes down to the individual. You need to be a certain type of person to go out there.”
McElhinney noted that while the temptation is there to move away, there’s no need fixing what isn’t broken.

“If you’re satisfied with your coaching situation, there’s no real need for a change,” McElhinney said.

“Obviously, going out to America is a monumental change, and a lot of their coaching philosophies are a bit different as well.”