Olivier Marteel will be recognisable to a lot of snooker fans as a top-level referee, but during ...

Olivier Marteel will be recognisable to a lot of snooker fans as a top-level referee, but during these uncertain times he is working in a coronavirus A&E department in his native Belgium.

The 50-year-old has refereed many great games over the course of his career, including the finals of all the Triple Crown events - the World Championship, the Masters (twice), and the UK Championship.

He was the man in charge for Stuart Bingham's 18-15 world decider win over Shaun Murphy in Sheffield in 2015. However, right now he is making use of his qualifications in the medical field, with the World Championships now rescheduled to July 31st.

Marteel spoke with Off The Ball's Shane Hannon about how his work over the last while has put things into perspective, and how his current emergency role came about.

"I contacted my head nurse and said, 'listen, I don't want to stay home for five or six weeks, I'll go up the walls here at home!' So, as in every other hospital in Belgium, we had to prepare another A&E especially for Covid-19 patients, which is at the other side of the hospital.

"He was looking for staffing and I said 'yeah, count me in no problem. I'll do whatever I can.' So now every day from 8am until half past four in the afternoon, well you can't leave at half past four when a patient comes in of course...

"So yeah I'm doing this until probably May or June, I'll see."

Marteel ordinarily works in radiology, and has been involved in medicine in some capacity for almost three decades, although he acknowledges this is different to his normal routine of CT scans and X-rays.

"When people come into the Covid-19 A&E, I'm the first person they see. So I'm a triage person, then I see if I have to contact the doctor. I call my colleague and he or she does the swiping on the throat.

Here is one of our top referees @BelgianProRef1 putting in another long shift to save others #heroes #stayhome pic.twitter.com/9447H1DSA8

"If it's really severe and the patient is brought in an ambulance and has to be admitted to hospital, I sign them in and do all the administration, so that only one person is in contact straight away with the Covid patient."

Belgium was reporting 6000 deaths and over 40,000 cases last weekend, giving it one of the highest rates of the virus in Europe outside the likes of Italy, France, and Spain. However much of those figures can be put down to Belgium's honesty with figures and speed with which they process the numbers.

Marteel is based at AZ West Hospital in Veurne, near the French border, and he says a shortage of Personal Protective Equipment (PPE) is a problem there as it is in many countries right now.

"There is a shortage of masks in Belgium and many other countries, as well as PPE equipment and even gloves. Now they are using those scuba diving masks, and on top there is a filter. We have to remove and replace the filter every 24 hours.

"I prefer to work with FP2 masks with a screen in front of my face, rather than those scuba diving masks. It's terrible to breath in there, when you have to breath in it's like you're suffocating.

"When you have to wear that for a minimum of eight hours, I don't want to complain but, if you try it even after five minutes you'll have to take it off.

"Those suits don't let any heat body fluids out, and they don't let anything in. The heat you are producing stays within the suit and it can't come out quickly enough. 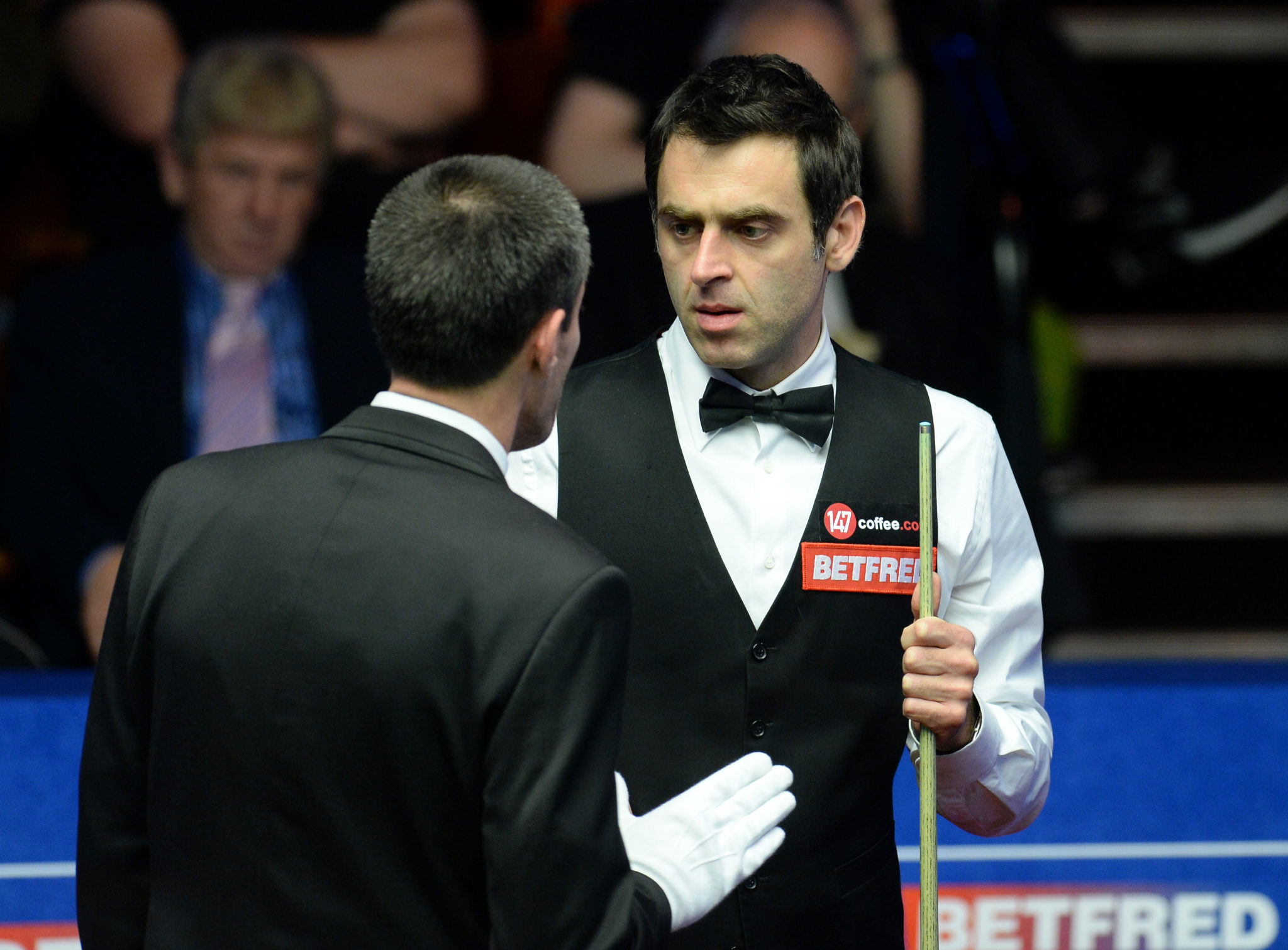 Ronnie O'Sullivan is spoken to by referee Olivier Marteel in his second round match against Matthew Stevens during day nine of the Betfred World Championships at the Crucible Theatre, Sheffield.

"When I take them off in the evening my hands feel like gum, it's like a hot shower for half an hour. That happens after half an hour or 45 minutes, but you have to stay in those gloves for the rest of the day. You need good hygiene afterwards and some cream so your hands can recover.

"It's sometimes difficult. I can feel myself... I'm not tense, but I'm on the edge."

There are plenty of opportunities to see the good in people though, and Olivier says he has seen the very best of his country during this period so far.

"At my hospital they've put a kind of cube outside, and you can go online shopping and they'll deliver your food or whatever you've asked for in that box. So you don't have to go to the shops.

"Last week with Easter, for the whole hospital they gave us 100 kilograms of chocolate eggs! A baker baked pancakes, hundreds of them, and they divided them among the hospital.

"So yeah, I can see people are thinking about us. And that's positive!"

Although he has officiated in matches with many of the great modern snooker players like Ronnie O'Sullivan, Judd Trump, Mark Selby, and John Higgins, Marteel says he has never had any favourite players.

"No, no. I never had. When we put the TV on in the 80s it was always Steve Davis on the TV. Nearly every match Steve was on the TV, and after a few years my grandfather and I said 'Steve Davis again!'

There is a chance the World Championships scheduled for later this summer may have to be played behind-closed-doors, and Olivier says he can understand the desire from World Snooker to do that, if the alternative is no tournament.

"For the players, if they don't play, they don't earn any money. That's okay for the top 16, the top 32, but below that I can imagine the end of the month is not coming quick enough. For me, if it's a one-off that we play behind-closed-doors, for me that would be fine.

"It means they still put health first. We're going to have millions watching on TV, even if it's in the summer, because a lot of people will still have to stay home.

"Not to have an audience at the Crucible would be a first, and I think it's going to be very strange if it is like that. But if it can help out the players to earn some money... I can understand that. 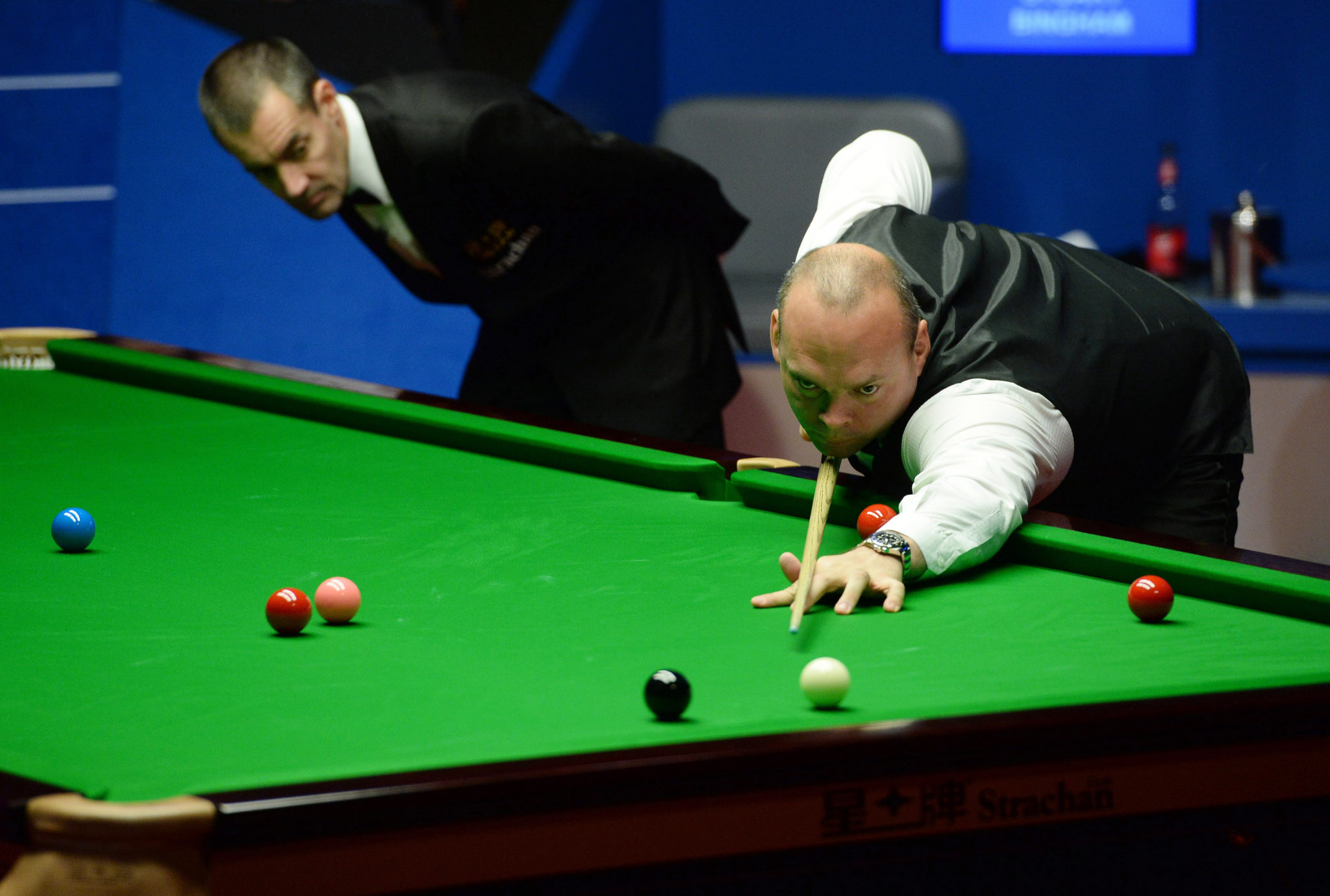 Stuart Bingham at the table watched by referee Olivier Marteel in the final match against Shaun Murphy during day seventeen of the Betfred World Championships at the Crucible Theatre, Sheffield.

"As long as they put the health of the general public and everybody on top of the list, then for me it's fine, whatever happens."

Finally, Marteel says that as his career within the sport of snooker has progressed, he has learned to be more relaxed on the job, while remaining firmly focused.

"That pressure is gone for a bit. I don't want to sound big-headed but, yes, I've done it all - I have a triple crown, I've done a second Masters final, I've done eight or nine ranking finals.

"So yes I go out and I'm still a bit on edge, stressed. But it's not like it used to be - I treat it 100 per cent as a job, but [I get to] have a pint, have a meal with colleagues, I can see people enjoying the snooker, have a chat with people on the streets or in the pubs. So yeah, for me it's a holiday!"