As the heavyweight champion of the world Anthony Joshua seeks to contextualise his defeat to Andy Ruiz earlier this year, Andy Lee believes the British fighter is only raising further questions for himself to answer.

Standing in the ring where he had just defeated Andy Ruiz Jr to reclaim his heavyweight belts from the Mexican-American fighter, Anthony Joshua took the opportunity to temporarily bask in his own humility.

"There were no excuses, right," he stated in his post-fight interview with Sky Sports of the first bout between the pair six-months ago. "A man like me don't make no excuses."

From the vantage point of having retained his belts, it is perhaps unsurprising that Joshua has since attempted to contextualise - if not excuse, exactly - his first professional defeat to Ruiz.

"I had some issue with my health which I was going through for a long time," he told the BBC's 5 Live Boxing podcast. "I didn't know what was wrong with me. I felt so tired and drained and thought it must be down to training.

"In the changing room before the fight, I got a bucket of ice and was putting my head in it thinking 'why do I feel so tired?' After my check-ups, it showed what the problem was and this is what you have to get sorted.

"Even in this camp I had an operation done but as I'd started training in June I had no issues."

He actually also said he had an operation during training camp. When you say things like that and don't give a definite answer, questions emerge. 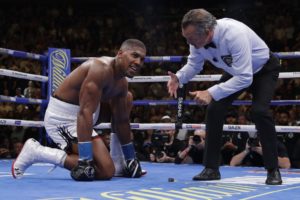 Without revealing the exact nature of what ailed him, Joshua's comments invite further scrutiny according to the former middleweight world champion, Andy Lee.

"It was an interesting few comments he made to Mike Costello and Steve Bunce," he noted, "that he'd been sick and always tired and run-down.

"After the fight, he went to see a doctor and now it all makes sense and he's flying. So, what was wrong?

"He wouldn't say what it was. He actually also said he had an operation during training camp.

"When you say things like that and don't give a definite answer, questions emerge."

In that post-fight interview with Sky Sports, Joshua did claim that he would one day reveal insights from his boxing career in a tell-all book.

For now, however, he has left onlookers with little more than the ability to speculate about what went quite so wrong during his American debut.