Once again Novak Djokovic triumphed, defeating Dominic Thiem to secure his record eighth Australian Open crown while there was yet another first-time grand slam winner on the women's side where Sofia Kenin emerged victorious against Garbiñe Muguruza.

Here is a statistic of note: since the start of 2006, there have been just seven different male grand slam winners. Over the same period, 25 women have become grand slam champions. 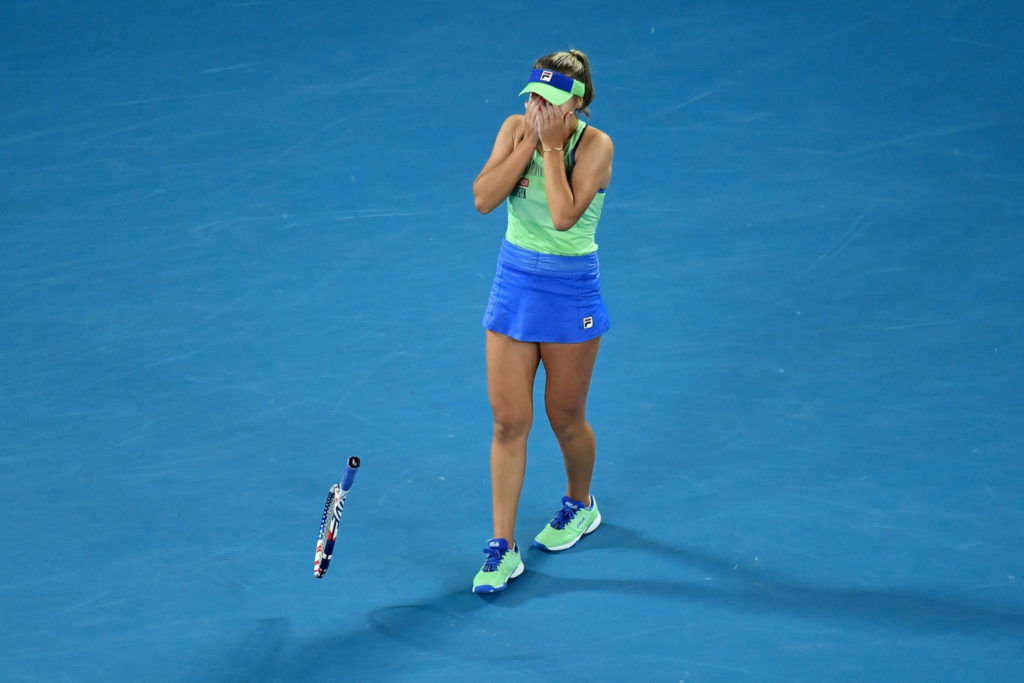 (200201) -- MELBOURNE, Feb. 1, 2020 (Xinhua) -- Sofia Kenin of the United States celebrates her victory after the women's singles final against Garbine Muguruza of Spain at the Australian Open tennis tournament in Melbourne, Australia on Feb. 1, 2020. (Photo by Bai Xue/Xinhua)

Osaka is the outlier above, with the former world number one the only name on that list to have won consecutive grand slams during this period (2018 US Open; 2019 Australian Open). The 22-year-old was eliminated in the third round of this year's Australian Open by teenage superstar Coco Gauff in straight sets; 3-6, 4-6.

Gauff exited in the next round, losing a loose three-setter to 14th seed Kenin; 7-6, 3-6, 0-6. All the headlines in the aftermath were about the 15-year-old's best grand slam performance to date. Little heed was paid to her slayer, just as there was when Kenin upset Serena Williams in the third round of the French Open last year. Yet here we are, Kenin sneaking in as the new Australian Open champion in what was the 21-year-old's inaugural grand slam final after she beat home favourite and world number one Ash Barty in the semi-final in straight sets, saving two set points in each set en route to a famous victory.

The Russian-American - whose parents emigrated to New York from Moscow with $300 where her father (who coaches his daughter) learned computer science by day and drove taxis by night to support his family - defeated two-time grand slam winner Muguruza in an encounter which went the distance.

Kenin was 0-40 down on her own serve at 2-2 in the third and at a set apiece when the key moment occurred. Demonstrating remarkable audacity, Kenin went for broke facing three sequential break points when most others would crumble, striking a handful of breathtaking winners off her forehand and backhand side in the process while adding an ace for the icing to hold serve.

She then immediately broke her opponent's serve, forcing Muguruza to double fault; a mistake the Spaniard repeated minutes later to concede the championship to Kenin while simultaneously demonstrating the unpredictability of the women's game these days.

There was a time not too long ago when Kenin - who's still a relative unknown on the global scale with less than 35k Twitter followers (no bad thing, of course) - reconsidered turning pro in favour of attending college full-time, and here she is at the start of 2020, the latest in a long line of fresh grand slam winners on the WTA Tour. 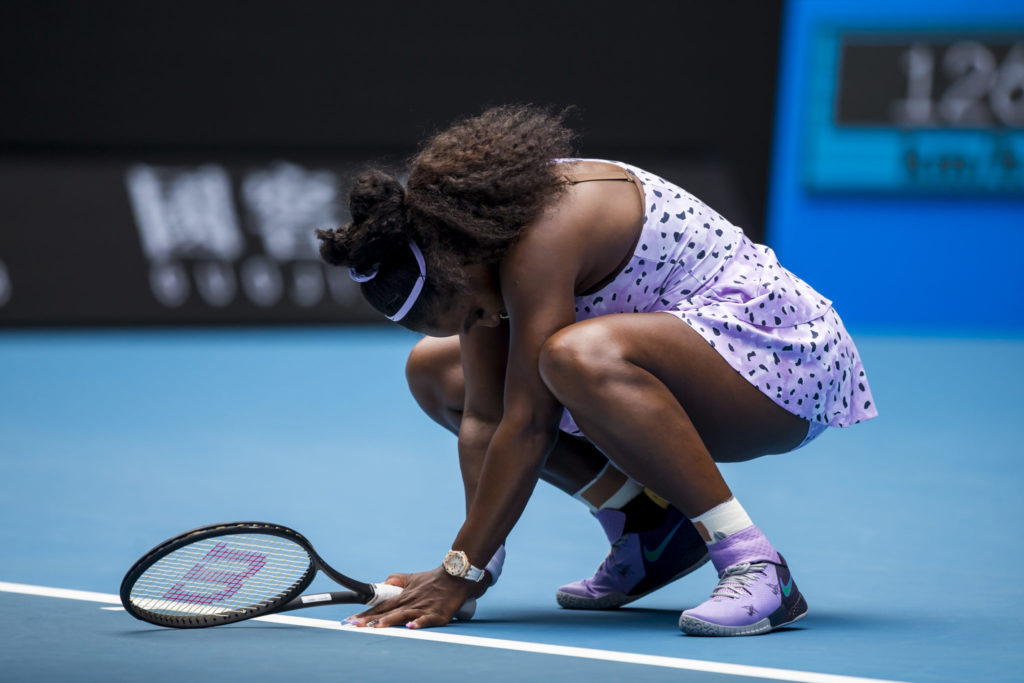 Serena's victory in Australia three years ago was her 23rd major triumph, putting her one behind the all-time record holder Margaret Court but she has yet to match that historic milestone, losing four grand slam finals since, all in straight sets.

Referring again to the above list, Ostepenko's win against Halep in the 2017 French Open final was, so far, a one-off victory by the Latvian, as was Sloane Stephens' in the same year, when the adept American defeated compatriot Madison Keys in the US Open decider.

A player who will definitely finish on a solitary grand slam title is the 2018 Australian Open winner, Caroline Wozniacki. The 29-year-old retired from the game following her third-round exit this past fortnight.

She will now focus on campaigning globally about rheumatoid arthritis (from which she suffers) and dedicating more time to her personal life with her husband and ex-NBA star, David Lee. A former world number one for a total of 71 weeks, the Dane leaves tennis behind having won over 30 singles titles; the zenith of which was her victory in Melbourne two years ago. 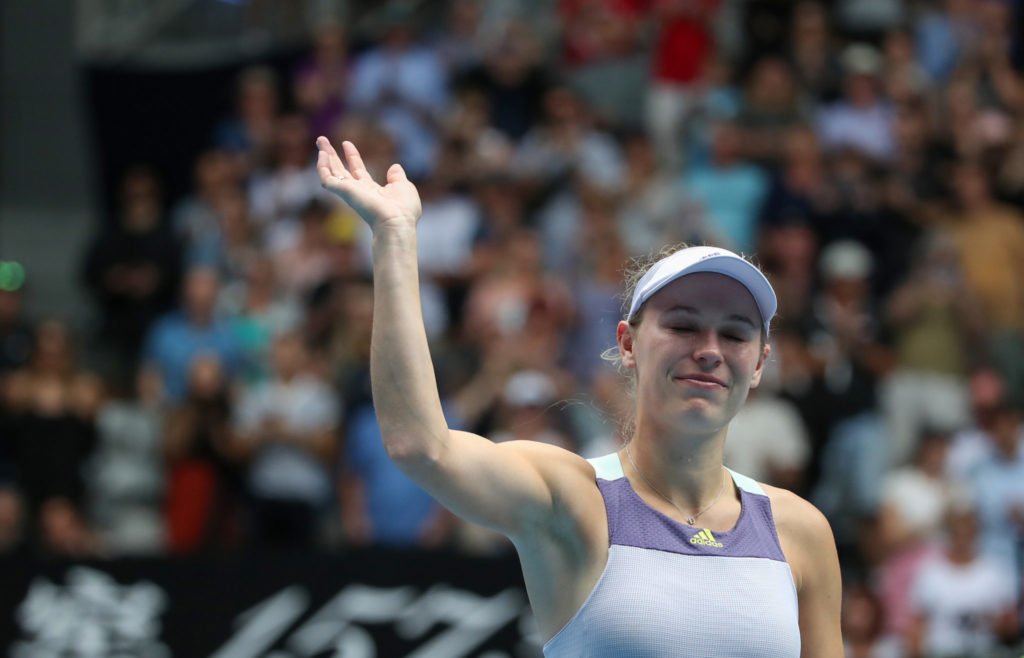 It all leaves the WTA top 10 tour rankings, at the time of writing in the immediate aftermath of the latest Australian Open, looking like so (number of grand slam titles included):

Colm Boohig spoke to Ger Gilroy & Eoin Sheahan on OTB AM to discuss the state of elite-level tennis following The Australian Open. Watch below:

A chasm between both sides of the game is not necessarily a negative because while the women's side is stacked with players capable of winning the biggest prizes, their male counterparts have to contend with the continued hegemony of the Big Three.

That puts the 32-year-old just three behind 38-year-old Roger Federer; the record-holder of 20 majors whose tally has been only one ahead of the 33-year-old Rafael Nadal's 19 grand slams following the Mallorcan's victory in last year's US Open final against Daniil Medvedev. 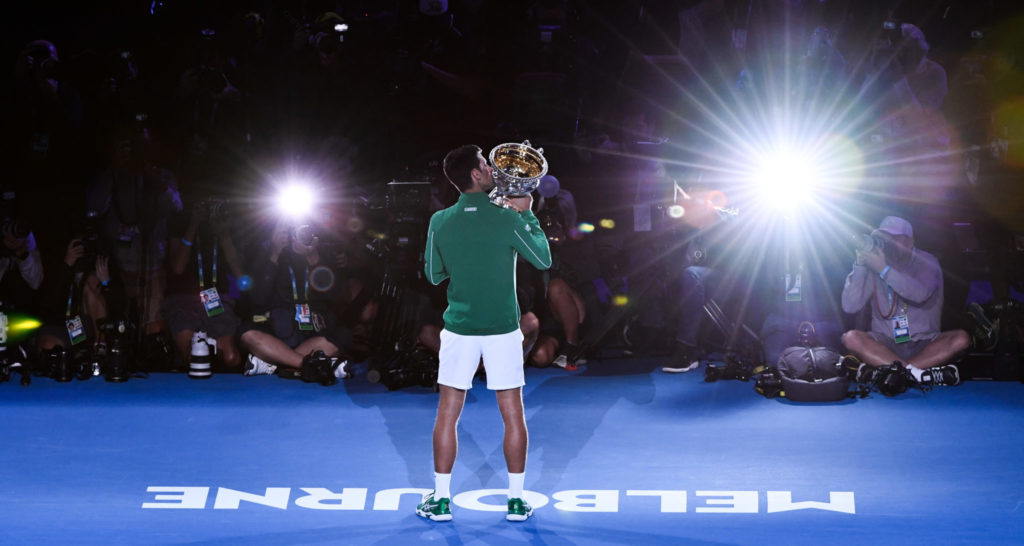 Tennis fandom has been gifted these three gods of the sport over the last decade-and-a-half. We are probably looking at the three greatest players to have ever played tennis. To have them competing all at once is unparalleled and it's to the viewer's benefit, but not the competition's.

Just look at the statistics mentioned at the start of this article. Only seven various grand slam champions on the ATP Tour since the beginning of 2006, AKA. only four other individuals.

It doesn't take long to list those rare occasions when a new name appeared on one of the four biggest trophies...

Juan Martín del Potro has one, claiming the 2009 US Open title when he upset peak Federer in a five-set thriller. Andy Murray, once a member of the now-disbanded Big Four has three; the 2012 US Open (vs. Djokovic) along with a brace of Wimbledon championships in 2013 (Djokovic) and 2016 (Milos Raonic). Stan Wawrinka has won them all once except Wimbledon; the 2014 Australian Open, the 2015 French Open and the 2016 US Open; beating Nadal first and Djokovic in the latter two.

And then there is Marin Čilić, winner of the anomaly that was the 2014 US Open when the Croatian beat Kei Nishikori of Japan in the only grand slam final since the 2005 Australian Open decider that did not contain any of the Big Three or Andy Murray, who lost a total of eight grand slam finals between 2008 and 2016, along with the three the Scot won.

That is a remarkable level of dominance shared among the handful at the elite-level of the men's game over 15 years. 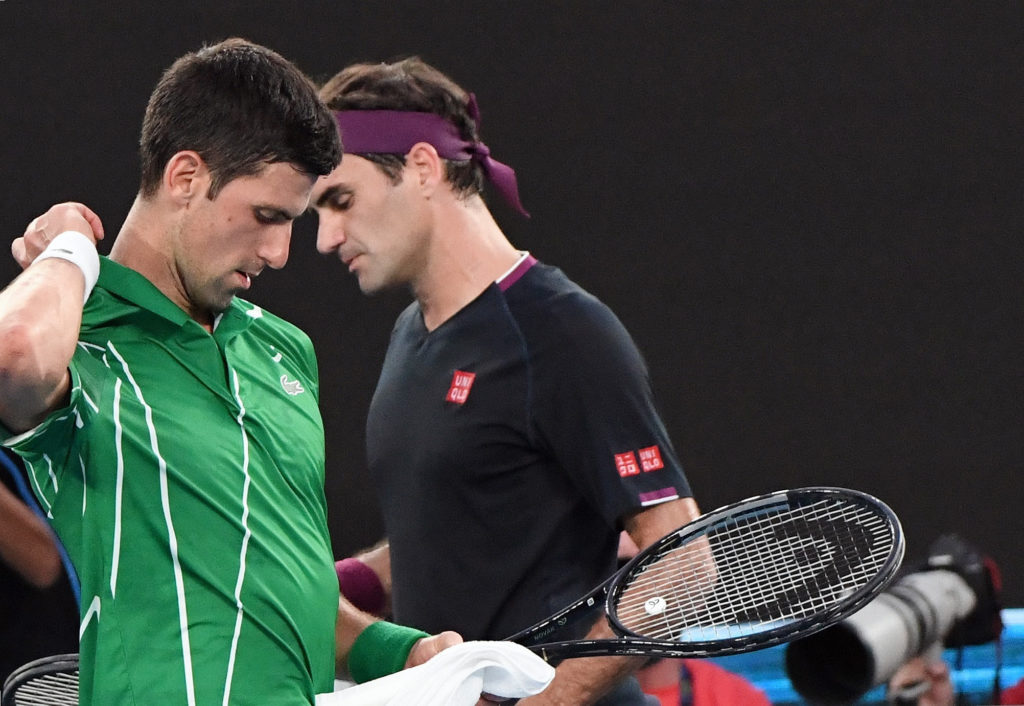 The question now is how long can the Big Three continue to prize the trophies away from the rest? Their ages - purposely mentioned above - are currently the only real threat to their status, particularly when it concerns the eldest member of this royal mini-group.

Federer is arguably the most talented person to have ever picked up a racket and is certainly one of the most beloved, but analysing the statistics over the last decade, when compared to his pair of career-long rivals, makes for stark viewing.

Since the Swiss maestro defeated a heartbroken Murray in the 2012 Wimbledon final, he has won only three more grand slam titles. In the same period of time, Djokovic has gone from five to 17 grand slams and Nadal from 11 to 19 major championships.

Djokovic has possessed unequalled, relentless consistency since going gluten-free in 2011 and Nadal's firm grip on Roland Garros has not yet relented. Federer's inimitable and transformative skill, however, is finally being matched by his advancing years. He will turn 39 once the three remaining slam finals in 2020 have been completed, in which time his overall slam haul could well have been levelled by Djokovic or even surpassed by Nadal. Remember, the duo have half a decade each over their extraordinary peer.

The challenge which the rest of the field has is believing that they can topple the Big Three on the grandest stage. They have the talent. Thiem is the best of the rest, taking Murray's mantle up in this regard. The Austrian beat Djokovic in last year's French Open semi-final and dismantled the Serb and Federer at the season-ending ATP Finals (which pits the top eight players in the world) this past November. 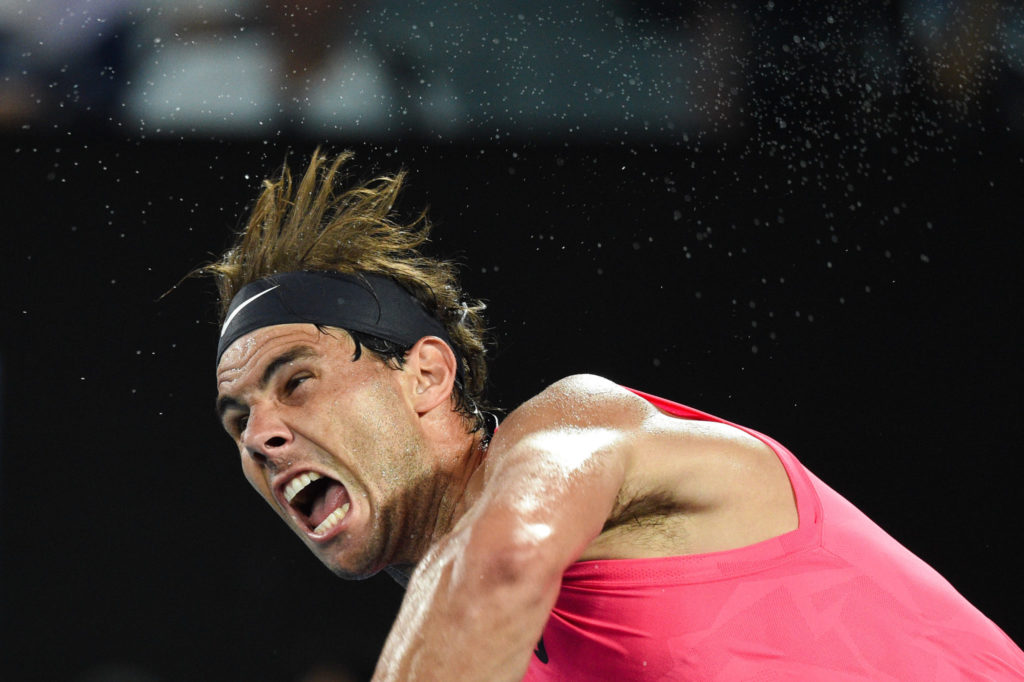 Thiem, 26, came up short in the decider against the precocious Stefanos Tsitsipas in London, with the 21-year-old Greek a certainty for at least one major if he remains on the right path. The aforementioned Medvedev, who reached the 2019 US Open final and who won more matches and reached more finals than any other player on the ATP Tour over the last 12 months, is a genuine contender to the throne.

There is Alexander Zverev; semifinalist at this year's Australian Open and winner of the 2018 ATP Finals. The 22-year-old has won a collection of ATP Masters 1000 series with a healthy supply of flair and an ever-improving serve in his far-reaching arsenal. Then, of course, you have the wonderfully gifted but perennially frustrating Nick Kyrgios, who performed well over the last two weeks - losing to Nadal in an entertaining fourth-round clash - and who has beaten each of the Big Three convincingly in the past.

But here's an interesting and unquestionably concerning one for the challengers to contend with: Djokovic and Nadal each won their maiden slam against one-time-only major finalists - Nadal vs. Mariano Puerta; French Open, 2005. Djokovic vs. Jo-Wilfried Tsonga; Australian Open, 2008 - while Federer clinched his first of 20 against Mark Philippoussis in the 2003 Wimbledon final. Philippoussis's only other slam final experience was the 1998 US Open showdown which he lost to fellow countryman, Pat Rafter.

For everyone else competing in modern tennis, the last decade shows that to be the best on the men's side, you've got to beat the best. And the Big Three are sticking around, for now.

It all leaves the ATP top 10 tour rankings, at the time of writing in the immediate aftermath of the latest Australian Open, looking like so (number of grand slam titles included):

The chasm between the closed market of the men's game and the free trade movement of the women's competition has rarely, if ever, been more contrasting.

Something, perhaps a force of nature hurtling in the opposite direction, has to give on both sides... and we cannot afford to look away.

Kenin and Muguruza through to Australian Open final