If you read beyond this point, you'll be stepping into a minefield of Last Chance U spoilers. So tread carefully.

But for those unacquainted with the Netflix series, each season follows a Junior College American football team from one of the flyover states.

Season 1 and 2 took place at East Mississippi Community College, based in the town of Scooba. The most recent fourth season, as well as Season 3, moved to Independence Community College in Kansas. Apparently, Season 5 will be set in Oakland, California which is a step away from the Midwest and Deep South of the first four series.

I don't confess to be an American football fan. But regardless, it's an enjoyable show based around the different characters that populate their JUCO football programs. You get a wide rubric of experiences to immerse yourself into - from  regular irrational head coaching calls to players struggling to marry academics and the pressure of achieving in the only domain a lot of these predominantly inner-city and out-of-state kids get any recognition in: Football. A lot of them are in the midst of their second chances after misdemeanors or missteps made in the past. What follows is their journey to try and get back on track for the unlikely but tantalising prospect of playing in the NFL and the life-changing circumstances that would have.

It's a window into a side of sporting and societal life that we don't really have to the same degree on this side of the pond. The fourth season does highlight a few undercurrents, sometimes relevant to what's happening societally and politically in the US and now beyond. There are the locals who aren't totally in love with the idea of funding a sports programme with a large swathe of inner-city kids from out-of-state.

Some players seem to struggle to escape from the clutches of the circumstances they emerged from. Teachers seem to fight a forlorn battle to get some student-athletes to focus on assignments and study. While some of those players are not academically-gifted, it's also highlighted that some of them have been given an easy ride off-the-field previously - as long as they were delivering as football players. But when their football suffers, their sense of self and how they are valued by coaches diminishes.

Which brings me to the issue that caught my attention the most. Concussion and its effects are a sporting issue we are far more aware of now, including here in Ireland. Whether it be rugby and Head Injury Assements (HIA) or the effect of heading a football (or soccer ball as our American cousins would refer to it as),  at least it's talked about now.

King's the name- speed is the game pic.twitter.com/fwOfJcHv2s

It's a topic we've covered regularly on Off The Ball over the years, including in the NFL. For example, back in 2016, we spoke to Dr Bennet Omalu who was the first medical professional to publish findings of the neurological condition chronic traumatic encephalopathy (CTE) in American football players. His story got the Hollywood treatment with Will Smith playing him in the movie Concussion. We've also spoken to Mark Fainaru-Wada, co-author of League of Denial: The NFL, Concussions, and the Battle for Truth.

I was in Denver Broncos' opposition dressing room recently and a poster on the wall in the medics room highlights the need for players to take heed of symptoms. 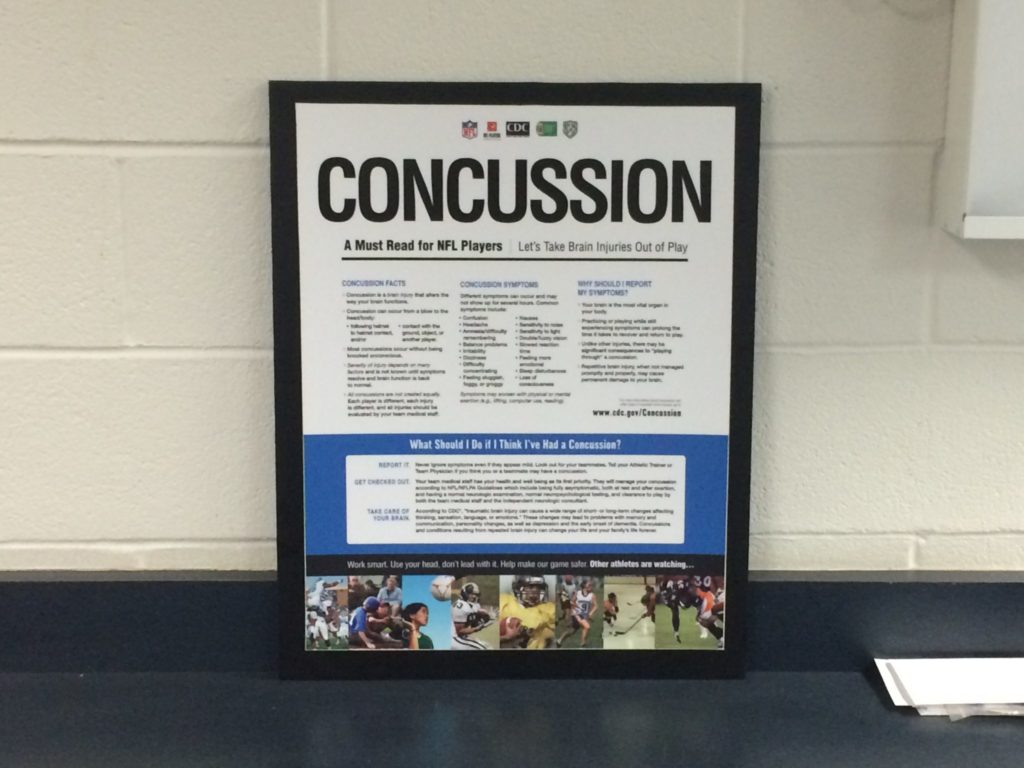 So the threat and long-term effects of concussion are very much known. Yet in Last Chance U's Episode 5, star wide-receiver Markiese King is involved in a concerning incident. In a match against Fort Scott Greyhounds, King gets taken out (not in the romantic sense as you'd imagine) by an opposition player.

Markiese King after the collision that left him prone on the turf. (Last Chance U Season 4)

He's left writhing in pain on the ground and the immediate concern is to his neck. But there is also a moment where he appears to briefly lose consciousness. He is able to walk off the field unaided. The No 5 gets assessed but says, "I promise, I'm good", more than once to the team medic.

But crucially the next scene is eye-opening. "I ain't going to lie to you, man, I got a concussion. I know I do, I went to sleep". Those are King's words to a team-mate as he awaits to rejoin the fray on the sideline. 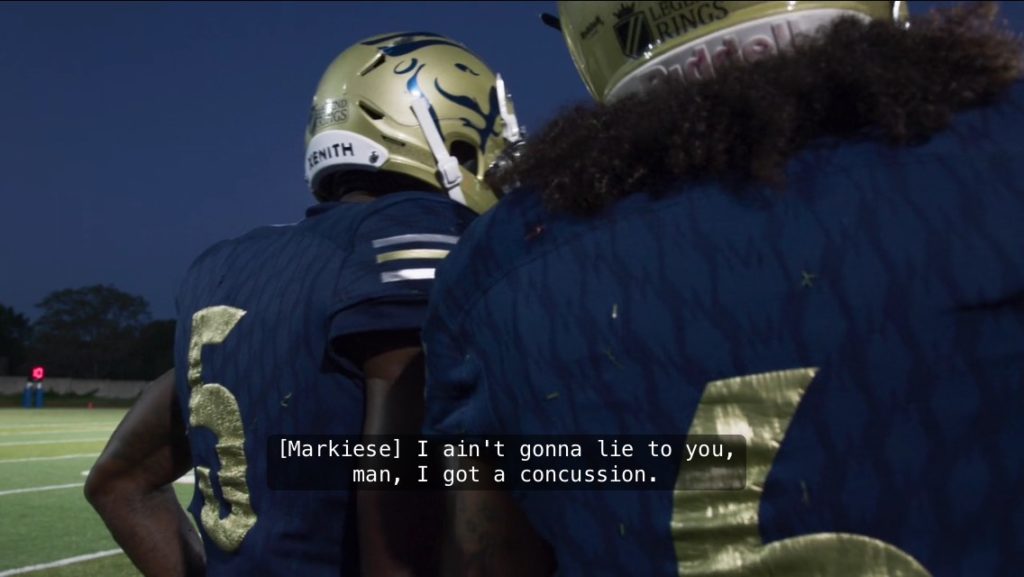 Shortly after that and he's back in the midst of the action. The camera picks him up in what could be the next play - it's not quite clear. Two tacklers confront him and he takes more hits. Concussion is concerning on its own. But second impact syndrome is quite another and is potentially fatal.

While King emerges relatively unscathed, his post-game behaviour is eye-opening. He has what can only be described as a complete and utter meltdown. Aggressive and spoiling for a fight, it takes the combined effort of team-mates to stop him from getting stuck into whoever his intended target is. Whether that behaviour is concussion-related isn't 100% clear.

There are a couple of issues here. There is a responsibility on the player here to admit if he's suffering any concussion issues. King, however, says he's fine before privately admitting to someone else that he's suffering after-effects.

But at the same time, as mentioned before, these players are reliant on being on the field. There is an external and internal pressure to keep playing on. Without game tapes and burnishing their stats, any hopes of catching the attention of college scouts en route to the NFL become even more of a pipe dream.

However, it's not worth risking your brain in chase of a dream. So whether it be American football, rugby or any sport, it highlights that the on-field decision about playing on post-head injury should be taken out of the players' hands.

“Shouldn’t players get a piece of that?” - College football’s multi-billion dollar industry