"Build social housing in a residential area? Good luck to you!" | Paddy Holohan

Marking the release of his memoir Hooligan, former mixed-martial artist Paddy Holohan discussed the motivating factors behind his move from the octagon into Irish politics.

Elected to the South Dublin County Council earlier this year, Paddy Holohan, who had fought professionally in the UFC and was now running as a candidate for Sinn Fein, gauged the magnitude of this landmark on his mother's reaction to it.

"She would look at doctors, TDs and councillors as good people, people who had made it. So, when I was going to be a fighter, I don't think she was too excited about that.

"It's not an aspiration you have for your child growing up, but then when I was elected, in her mind I had gotten a real job."

From the "failed project" of Jobstown in south Dublin, as Holohan terms it in his book, the 31-year-old had successfully navigated a move from professional fighting into politics.

Proud of his complex background and upbringing, it is only with the passing of time that Paddy Holohan has come to truly understand it, however.

"She fell pregnant when she was young and spent time in the Magdalene Laundries," explained Holohan in Hooligan of his mother's own complicated youth. "Sadly, her baby did not survive.

"She also lost another baby a few years later when my brother Neville died. She would never get over the loss of her children, and those tragedies marked the beginning of her battles with mental health.

"That constant struggle has been a part of my mother's life for as long as I can remember, and it saddens me when I think of the tough times she's been through."

A difficult relationship in its own right, it is to his own mother's upbringing that Holohan returned when talk of his political motivations arose on Wednesday's OTB AM.

When these people are grown up and raising children, telling them that they grew up in a hotel for the first three years of their life because there were no houses in the country 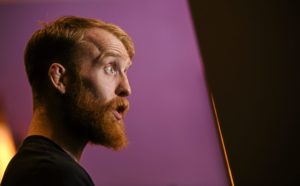 "That situation was a government situation as well," he noted of his mother's time spent in a Magdalene institution. "My mother would be a byproduct of that and many others across the country would be too."

For Paddy Holohan, the imprint of the associated stigma isn't easily shifted.

"People would have looked at my mother moving into a council house then and be like, 'Oh, you got a free house,' and all that," he explained. "I look at it longer than that.

"People look at social housing now and still look down on it, but I'm looking at it longer-term and what these people can produce in 20, 30-years time.

"My mother produced me from a council house in a single-parent household. There was a time when she was shamed for being a single mother, an unmarried mother in this country.

"But in a few years, you'll be asking the same question about people living in hotels.

"When these people are grown up and raising children, telling them that they grew up in a hotel for the first three years of their life because there were no houses in the country.

"It's going to happen again."

After only a matter of months in politics, however, Holohan has already encountered the difficulties that emerge as one attempts to alleviate the scourge of homelessness in Ireland.

"But if you want to build social housing in Jobstown? Sound, don't worry, everyone will tick those boxes. People don't want to mix housing, but that's what we need to be doing."

Uncertain what difference he can make, but determined to plough on regardless, the message Paddy Holohan carries with him is clear.

"I would like things to make sense," he expressed of his political desire.

You can watch back the full interview with Paddy Holohan here.

Fury three stones heavier than Wilder ahead of tonight's rematch