After a decade together spent working as fighter and coach, Paddy Holohan explored the manner by which his relationship with John Kavanagh disintegrated on Wednesday's OTB AM.

Travelling together from a Dublin gym to the Ultimate Fighting Championship, Paddy Holohan's career as a mixed-martial artist was cut short in 2016 by a rare blood disorder.

Yet, as discussed on Wednesday's OTB AM, Holohan's relationship with the self-professed Coach Kavanagh had initially looked to go beyond that of fighter-coach, exclusively.

"We were going to open a gym together in Tallaght," the recently elected Sinn Fein councillor outlined.

Kavanagh, who serves as President of the Irish Mixed Martial Arts Association, had planned with Holohan to establish another branch of his SBG gym in south Dublin.

"Time had gone on and we were looking for a building for a long time when John ended up getting contacted by an investor who ended up jumping onto the project," recalled Holohan. "I was a little hazy about that, and it turned out that I was being changed from, 'Paddy Holohan, UFC fighter', to a coach.

"So, I was getting ground down a little bit. I wasn't going to be standing in a gym out in Tallaght taking orders from a guy who literally knew nothing about mixed martial arts.

"I had said it to John many times that this is mentally killing me. I'd just lost my career and was now being told what to do by some guy who was just a fan of the sport basically.

"John didn't have my back on that and it came to a situation where he'd promised this and that but nothing happened. For my own sake, I had to leave and go back to the community centre."

I have no relationship with him now. I had John's back at one time, but John didn't have mine when it came to it 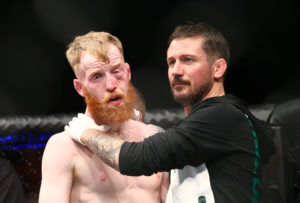 A split that pushed Paddy Holohan on to establish a separate gym elsewhere, he admitted that his relationship with John Kavanagh didn't survive the fallout.

"I have no relationship with him now," he noted bluntly. "I had John's back at one time, but John didn't have mine when it came to it.

"Through all of this, John didn't ring me or drop up to the community centre to see if I was ok.

You can listen to Paddy Holohan's interview in full here.

"There was a heavy, heavy load on my shoulders" | James Gallagher found a way to handle MMA stress

"When I quit school at 15, I was just squatting in John Kavanagh's house"