The decision to stage the Anthony Joshua vs Andy Ruiz rematch in Saudi Arabia has long caused dis...

The decision to stage the Anthony Joshua vs Andy Ruiz rematch in Saudi Arabia has long caused disquiet.

The gulf country's human rights record is also front and centre regarding the controversial decision.

The Guardian's chief sports reporter Sean Ingle is currently in Saudi Arabia ahead of the weekend rematch and joined us to discuss the issue.

He highlighted a recent chat with fight promoter Eddie Hearn about the Saudi issue.

"I spoke to him a couple of nights ago in quite a lot of depth. He argues that it's his job as a promoter to go to Joshua and say, 'Here are your choices. Cardiff are offering [x amount], Madison Square Gardens are offering that and we've just had a late bid from Saudi Arabia. Where do you want to go?'

"And he said to me, 'If I was to say to Joshua, don't come to Saudi Arabia, he would say, 'See you, goodbye!' So he's putting the ball on Joshua.

"I just can't put on my cape and save the world"

"And Joshua, who likes coming to the Middle East and often goes on holidays to Dubai, he has made that decision himself.

"Whenever I've spoken to Joshua before about this and human rights, he goes, 'I can't just put on my cape and save the world. It's not up to me to do that.'"

It's often said sport can have an impact in making societal changes. But how likely is that in the Saudi context?

"At the most, what you can hope for is micro-changes," said Ingle.

"So we met the head of the Saudi sports authorities - it was Prince Abdulaziz bin Turki. His view is that in 2015, the Saudis looked at how many people in their population exercised more than 30 minutes a week.

"It was only 13% and he said, 'This fight is part of a much wider package of things to get the Saudis more active. In response, I said, 'If you want to do that, why don't you let more women use mixed gyms?' 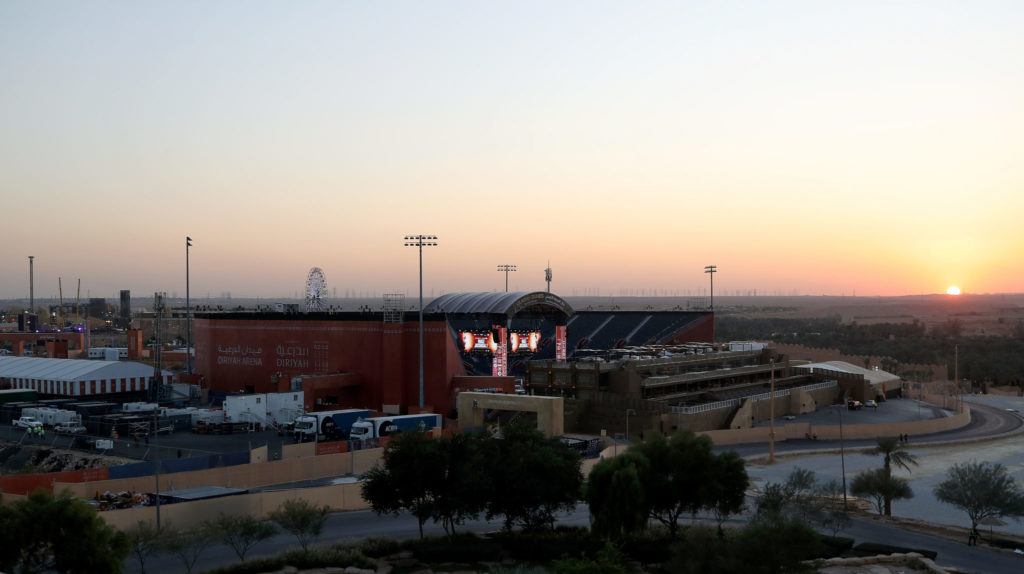 A view of the Diriyah Arena seen from the Diriyah Season Hospitality Lounge in Riyadh, Saudi Arabia.

"There is a colleague of mine in another hotel where the women are allowed to swim one hour a day. [Prince Abdulaziz's] response was, 'Well, things take time and we are changing. Two years ago women couldn't watch a football match, couldn't watch this fight. Now they can'.

"You speak to people here and they say there are small changes. But they're in a very narrow framework. There aren't going to be masses of changes here - fundamental change."

You can watch the full chat with Sean Ingle via our YouTube channel.

Paulie Malignaggi breaks down the Joshua vs Ruiz tactical battle

Anthony Joshua says Ruiz "won't get back up" in rematch