Formula One world champion Lewis Hamilton has offered his full support to the pulling down of a s...

Formula One world champion Lewis Hamilton has offered his full support to the pulling down of a statue of Edward Colston in Bristol.

Black Lives Matters protesters toppled the memorial to the 17th century slave trader and dumped it into the city's harbour.

Colston was a member of the Royal African Company, which transported around 80,000 men, women and children from Africa to the Americas.

The Colston statue had been a controversial presence in Bristol for many years, with several official attempts made to have it removed.

"I think circumstances came to a head and people felt the need to take the statue down," said Bristol mayor Marvin Rees in the aftermath.

"I can't and won't pretend the statue of a slave trader in a city I was born and grew up in wasn't an affront to me and people like me."

Hamilton weighed in on the issue on social media, writing, "If those people hadn’t taken down that statue, honouring a racist slave trader, it would never have been removed,” he said.

"There’s talks of it going into a museum. That man’s statue should stay in the river just like the 20 thousand African souls who died on the journey here and thrown into the sea, with no burial or memorial.

"He stole them from their families, country and he must not be celebrated! It should be replaced with a memorial for all those he sold, all those that lost their lives!"

UK Prime Minister Boris Johnson and his foreign secretary Priti Patel have both criticised the statue's removal, with the latter describing the toppling of a slave trader as "utterly disgraceful".

However, Hamilton is no fan of Johnson's cabal.

"I’m appalled at the UK government on how they have handled COVID[-19]", Hamilton said on Instagram. 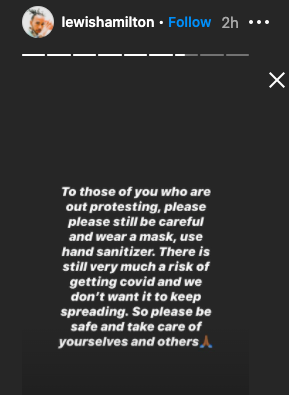 "You should have closed the boarders [sic] two months ago", he added, "How you can let people fly in from countries without being tested is baffling.

"You could have saved thousands of lives. We need better leaders!"