Dennis Rodman was a cornerstone of the last episodes of The Last Dance on Netflix, as we reflecte...

Dennis Rodman was a cornerstone of the last episodes of The Last Dance on Netflix, as we reflected on the Chicago Bulls legend's career on our new review show Off The Bull.

The opening of Episode Three highlights Rodman's attitude - one that served him greatly with the Bulls, as well as at the Detroit Pistons and San Antonio Spurs in an illustrious NBA career.

All-Ireland-winner with Kerry and Tralee Warriors basketball star Donaghy said Rodman was a player he always looked up to when he was younger.

"Jordan was my idol growing up, but when I realised I couldn't be Jordan, I modelled my game on Dennis Rodman.

"I had more Rodman posters in my room than Jordan, I had very little [Scottie] Pippen posters actually when I thought back. Rodman was my guy, I liked him in Detroit, I liked the 'Bad Boys' even though they were going against Jordan.

"I liked how they played... for me Rodman was the glue guy. Gary Payton said he was the 'fuck-up person' - he's the guy that just messes with everything!

"Rodman was wild... if you looked at the first four or five rebounds they showed of Rodman last night, he got five tips on one of them! Then they showed one in college when he tipped it three or four times around the basket. That second jump is how he was able to be such a good rebounder.

"His athletic ability, and the way Jordan and the guys spoke about how it took four laps to catch him, he was just going to throw himself out there, he was going to die for the cause. 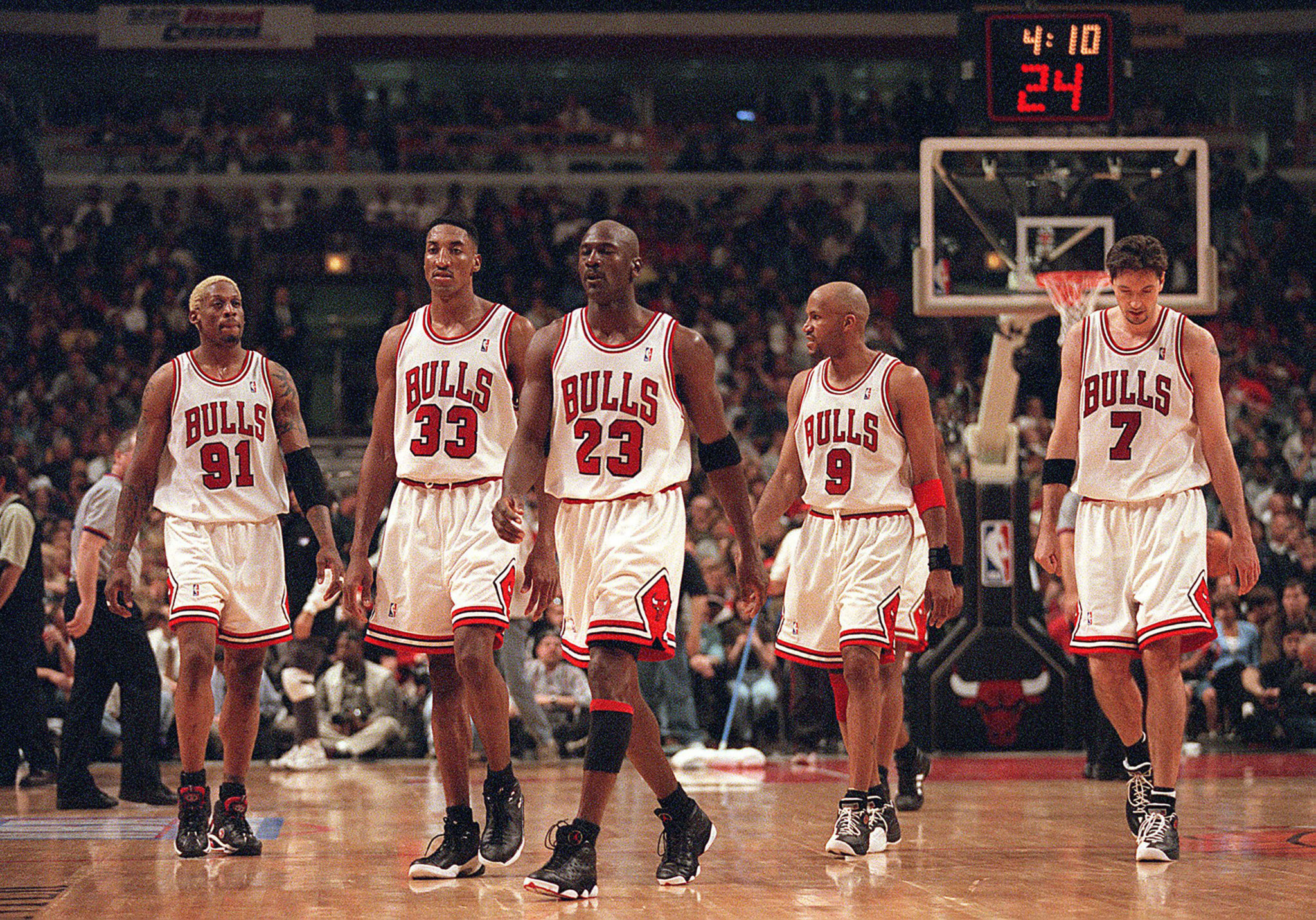 From left, Dennis Rodman, Scottie Pippen, Michael Jordan, Ron Harper and Toni Kukoc were big parts of Bulls teams that won three straight NBA titles from 1996 to 1998. Jordan and Pippen were members of the first "three-peat" team, which won titles from 1991 to 1993. (Photo by Nuccio DiNuzzo/Chicago Tribune/TNS) *** Please Use Credit from Credit Field ***

"That's what I loved about watching him, just the way he would just go get it. I did model a lot of my game on him, I still do.

"When I was looking back on his stats last night, his two years at San Antonio [Spurs] were off the charts. 17.3 and 16.9 rebounds per game, with a team that he didn't really get on with.

"He was just a freak of a guy, an unbelievable gel guy to help you win championships - he has five of them! And probably could have one more."