Jordan Gainford: "Davy is my idol - he always was, and always will be"

Gainford joined Ger and Johnny on Friday Night Racing this wee, explaining how much he values advice from the legendary Davy Russell.

Jordan Gainford: "Davy is my idol - he always was, and always will be"

For jockeys, as is the case for many other sportspeople, having a reliable source of advice is invaluable when it comes to fulfilling your potential.

Enniscorthy jockey Jordan Gainford is quite well-equipped in terms of mentors at his disposal.

A stable jockey for esteemed trainer Gordon Elliott, Gainford also receives wisdom and guidance from one of the most accomplished jockeys in the business.

The 21-year-old jockey claimed his first win at the Cheltenham festival last year, riding The Shunter to victory in the Paddy Power Handicap Chase.

Gainford joined Ger and Johnny on Friday Night Racing this week. He explained how any nerves quickly subsided before the race, thanks to advice from the legendary Davy Russell.

“I used to ring Davy Russell every morning,” Gainford revealed. “After I go out to Cheltenham in the morning, I come up to the hotel, get showered and get changed.

“I always ring him and ask him for advice on the day, what I was riding and what he thought; you couldn’t ring anyone better.”

“To be honest, I think he’s the best man to ever put a pair of boots on riding.”

“I just think he’s brilliant,” Gainford continued. “He’s never in the wrong place, he’s relaxed; if you ring him about a race, he’s able to tell you about the horse in four words.”

“He’s been around the blocks - he’s been champions in every way that he can. I think he’s achieved everything you can.”

“When you watch him on the horse, he never moves. Down to a fence, he never changed his style since he started riding.”

Gainford: "Davy is an out-and-out horse man in my eyes"

Gainford added that Davy Russell’s achievements and his unrivalled breadth of knowledge make him a one-of-a-kind figure in the industry.

“Even if he’s on the ground standing beside a horse, he’s just an out-and-out horse man in my eyes.”

“Ruby Walsh was special, Barry Geraghty was special - but I suppose I’m that bit closer to Davy, and I’m talking to him on the phone a couple of times a week.”

“To get Tiger Roll around in two [Grand] Nationals and [get him to] jump the way he jumped for him, is just unreal; to get him to win as well is amazing.” 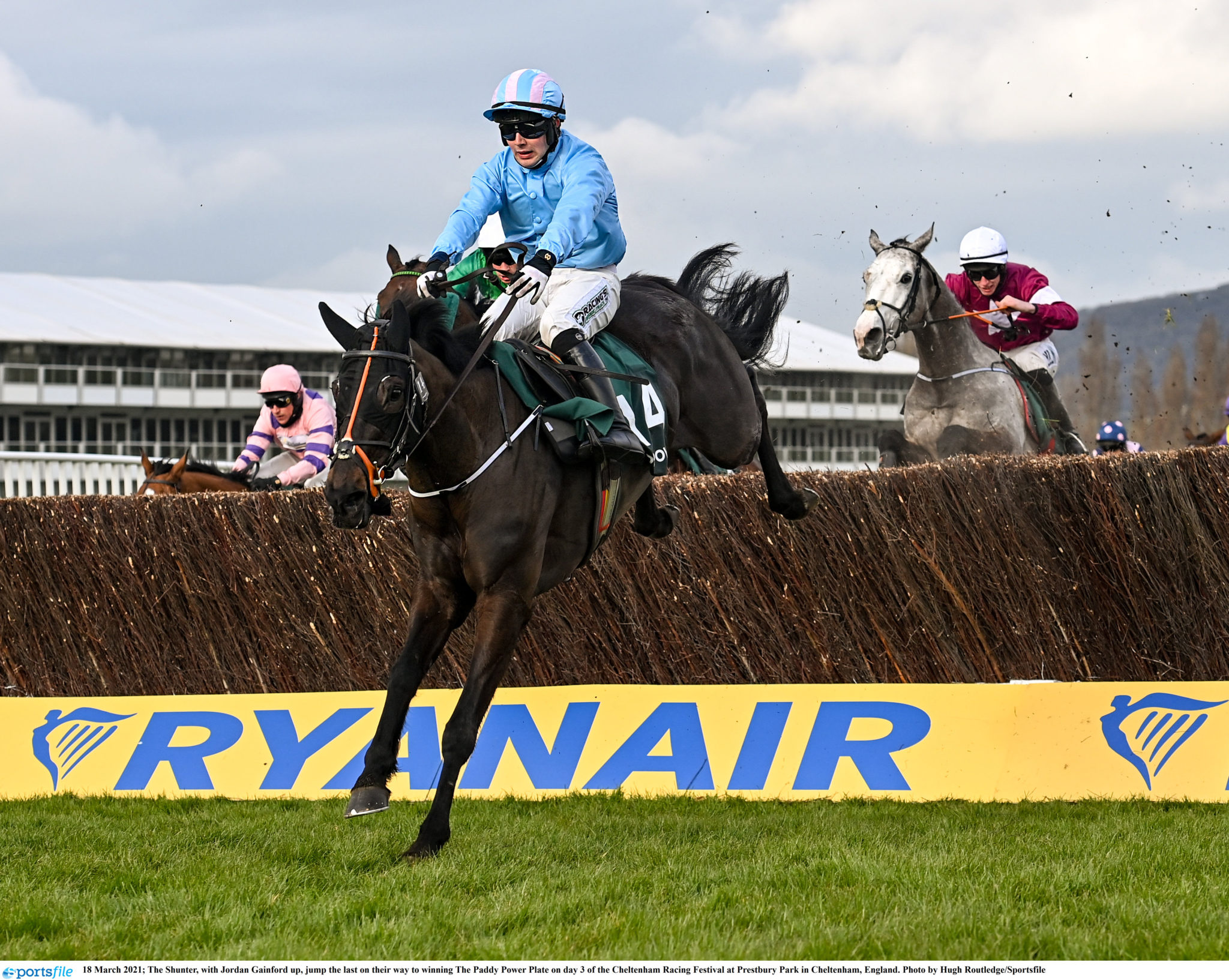 18 March 2021; The Shunter, with Jordan Gainford up, jump the last on their way to winning The Paddy Power Plate on day 3 of the Cheltenham Racing Festival at Prestbury Park in Cheltenham, England. Photo by Hugh Routledge/Sportsfile

The young jockey also detailed how Russell came to be his trusted advisor.

“When I started riding for Gordon, and looking back on form and everything, I would say to Gordon: ‘Did Davy ride this horse this way or that way?’”

“I suppose that’s where it started. I remember riding Chosen Mate on the first day of Cheltenham.”

“The first thing I knew I had to do was to ring Davy Russell.”

Rachael Blackmore guides A Plus Tard to Gold Cup glory