Brian O'Driscoll: Ireland's coaches must show their worth in 2021

With Ireland's Six Nations campaign set to get underway next weekend, Brian O'Driscoll has outlin...

Brian O'Driscoll: Ireland's coaches must show their worth in 2021

With Ireland's Six Nations campaign set to get underway next weekend, Brian O'Driscoll has outlined why Andy Farrell and his coaching team will be operating under scrutiny in 2021.

Although one would refrain from taking anything in the sporting calendar for granted, let it be assumed that Ireland will participate in the 2023 Rugby World Cup.

The tournament Ireland had ambitions of hosting before it was ultimately awarded to France, the success of Andy Farrell's tenure in the grand scheme will depend on how his team performs two years from now.

Nevertheless, with a Six Nations opener against Wales to come in a little under two weeks, Brian O'Driscoll has highlighted why this year's work will be crucial to what does or does not happen in 2023.

"I wouldn't say anyone is sharpening knives yet but you can't change a coach a year out from a World Cup," stated O'Driscoll on Tuesday's OTB AM. "So, I think there is a huge onus and focus going to be put on this year's campaign and whether we have got the right coaching ticket."

Previously a member of Ireland's backroom team, Farrell replaced Joe Schmidt as Head Coach when the New Zealander's tenure ended after the 2019 World Cup. Mike Catt, Simon Easterby, Richie Murphy and John Fogarty are among those Farrell has chosen for his own coaches.

Earlier this month, Ireland and Munster legend Paul O'Connell was also recruited to this ticket.

"It mightn't necessarily be Andy Farrell, it might be somebody else who maybe just isn't quite working," suggested O'Driscoll of the challenges awaiting each member of the backroom team in 2021.

"They're bringing Paul O'Connell in and they've got more IP there, so I do think they're building something positive. But they need the results to go their way." 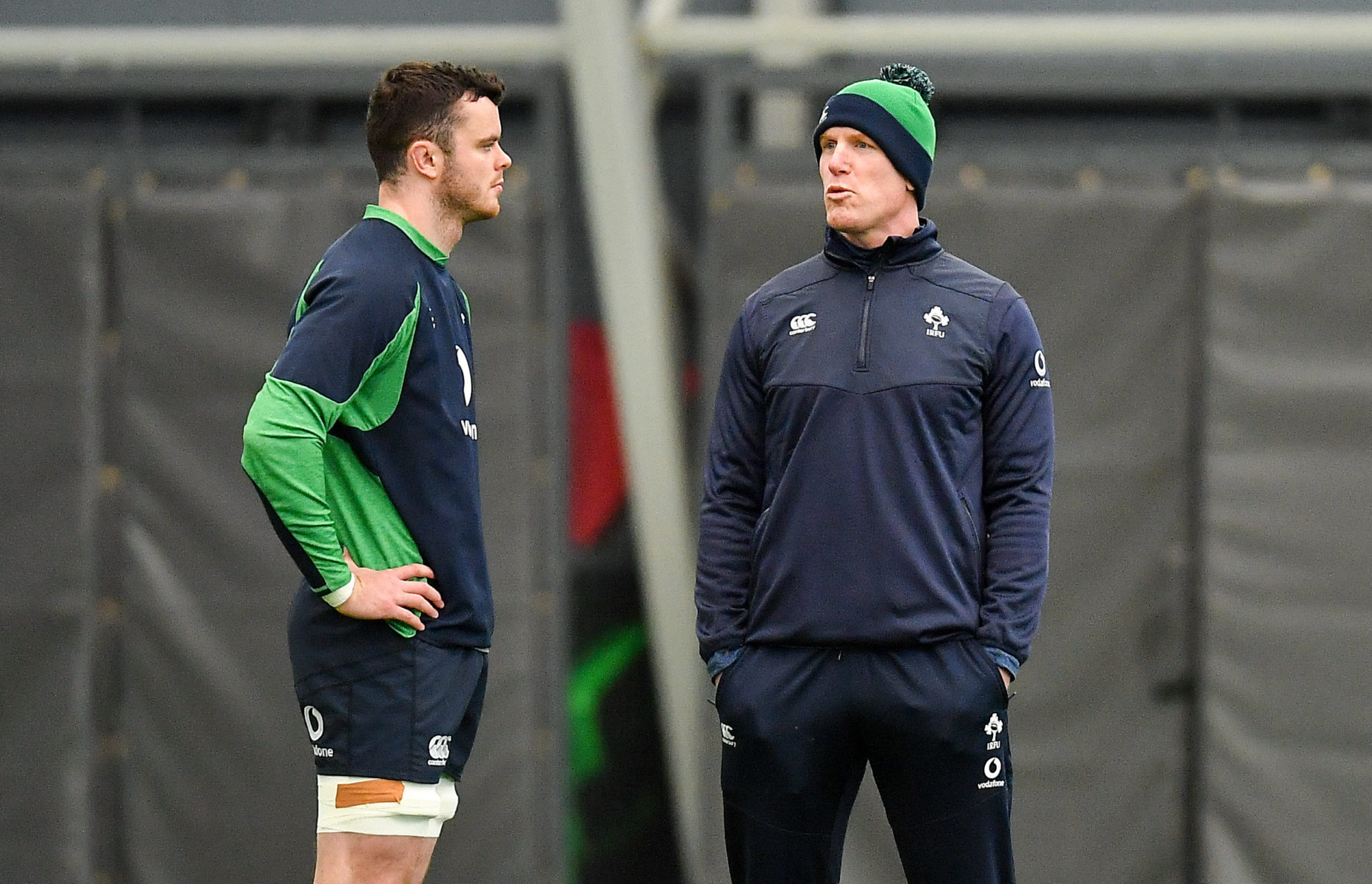 Paul O'Connell in conversation with James Ryan. Photo by Sportsfile

While a significant portion of Farrell's tenure as Head Coach has involved the added complications that Covid-19 generate, O'Driscoll nevertheless believes that Ireland's performances have achievable room for improvement.

Crucially, he suggested that the squad Farrell has selected for the Wales game next weekend reflects the urgency required for instant results.

"There are very few bolters in there," noted O'Driscoll. "He has brought in a small injection of youth but for the most part he's gone for the tried and tested.

"There was a lot of pressure in that Scottish game at the end of the November internationals. After a really disappointing performance against England and then another one in victory against Georgia, that was a vital win.

"It wasn't a perfect performance and there were aspects that were good, but I think he is definitely results-focused as well as development-focused.

"If you look at the strength of England and France at the moment, if Ireland can do better than 3rd in this year's Six Nations then I think that would be a huge win.