Defending European champions Toulouse had to play with only 14 men for the majority of their encounter with Ulster after Juan Cruz Mallia was red carded in the 10th minute.

Defending European champions Toulouse had to play with only 14 men for the majority of their encounter with Ulster after Juan Cruz Mallia was red carded in the 10th minute.

With a star-studded line up of French internationals, Ulster would be up against it in their Round of 16 clash. However, they were dealt a massive boost when Toulouse winger Juan Cruz Mallia was red carded for taking out Ben Moxham in the air.

While Moxham would have to leave the field for an HIA, Mallia was sent off as there were no mitigating factors. Toulouse would spend 70 minutes playing with 14 men.

However it was the French side that got off to a strong start, scoring in the sixth minute of the game through a powerful carry from Emmanuel Meafou. The score was converted and Toulouse led by seven after seven minutes.

"You won't stop 23 stone from that sort of range" 😤@StadeToulousain bash their way closer to the line, working the ball well from the breakdown to find Emmanuel Meafou, who boulders two defenders reaching for the line 💥#HeinekenChampionsCup pic.twitter.com/WCQJOM8iAJ

It was Robert Baloucoune that would fire back mere moments after Mallia's red card, however. He broke the line after the lineout awarded from the penalty and crossed the whitewash to level the scores after John Cooney's successful conversion. 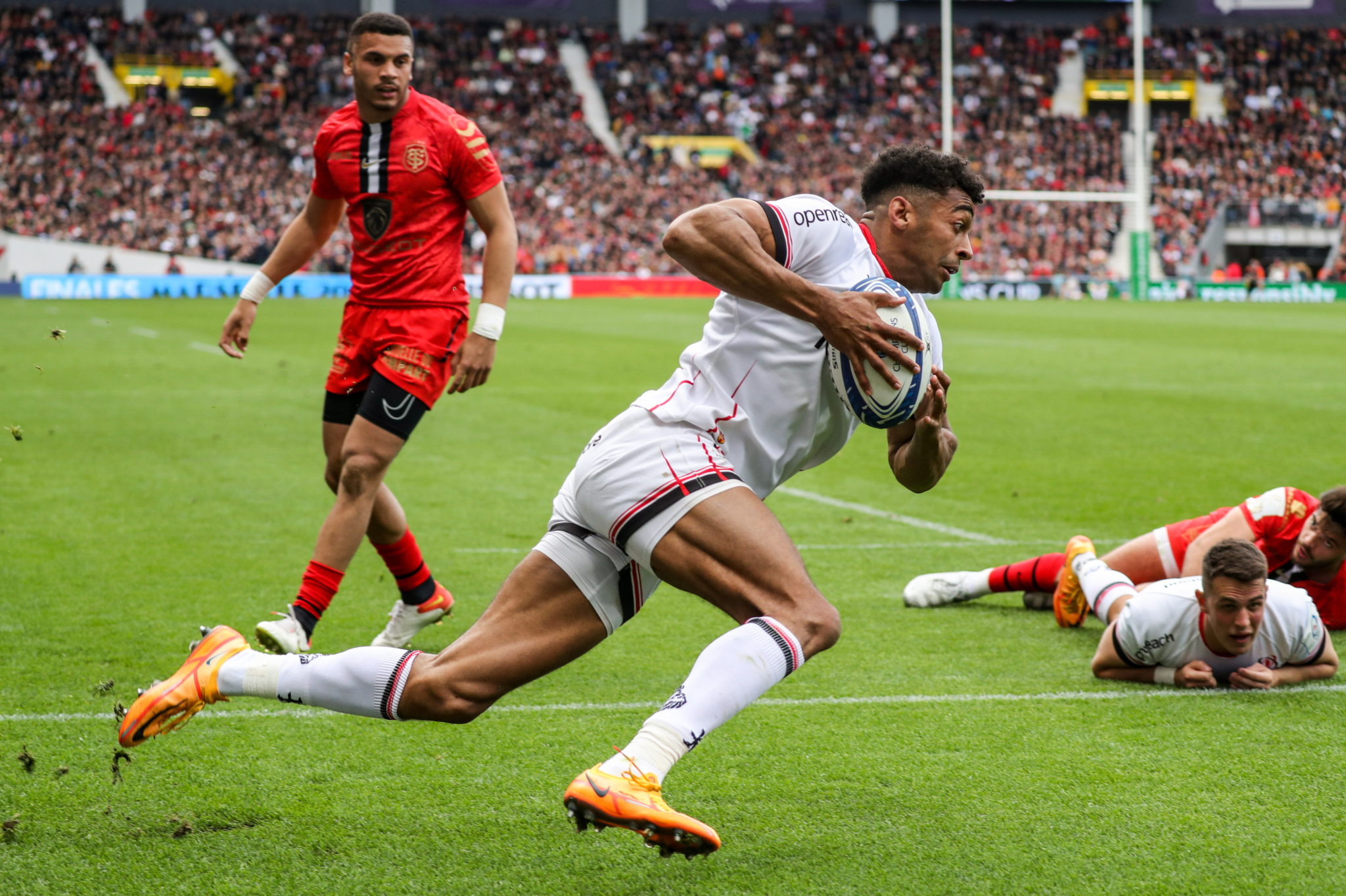 In spite of being a man up, though, Ulster's discipline let them down throughout the remainder of the half. They were unable to add to the scoreboard, despite camping inside the French 22m area, and they allowed Toulouse to add a further two penalties to the scoreboard before half time.

It was a mile a minute for each side at the start of the second half. Baloucoune completed his brace in the first five minutes of the second half with a brilliantly executed score out wide, off the back of a James Hume break.

The Ulstermen open things up 🔥

Excellent hands to work it wide and Robert Baloucoune gets his second of the match 👏@UlsterRugby back in it 💪#HeinekenChampionsCup pic.twitter.com/Ir7RLtXcnJ

It was not converted, however, and Ulster trailed by a single point. With just under 50 minutes on the clock, momentum continued to swing between the sides.

Matthis Lebel thought that he had scored for the hosts, but he was called back for a knock-on in the build up. Toulouse kept their hopes alive through a combination of Ulster ill-discipline and a powerful lineout defence.

Rory Arnold is INCREDIBLE at line-outs! 😤

The @StadeToulousain lock has read these Ulster throws like a book, disrupting their game at nearly every line 💪

However, on the stroke of an hour, Andrew Warwick put the visitors in front for the first time with a try after several pick and go attempts on the Toulouse line. The conversion would put Ulster six points ahead.

It was all but wrapped up for the visitors with just over 15 minutes left to play, as Baloucoune rounded out his hattrick with a brilliant intercept insode his own 22m which he ran under the posts.

There was a question around whether he was onside, however the TMO could not see a clear and obvious offside angle, and much to the chagrin of the French crowd, the try stood.

The long pass was easily read by the winger to intercept and find open grass ahead of him 🏃‍♂️💨@UlsterRugby in dreamland ✨#HeinekenChampionsCup pic.twitter.com/XCuLy8eltD

Not even the magic of Antoine Dupont could save the defending champions, as every offload the world player of the year attempted either didn't go to hand or found an Ulster hand.

Romain Ntamack almost sunk the hearts of Ulster supporters by scoring in the dying minutes. Ramos' conversion allowed the restart to be taken, with Ulster six points ahead, and the hosts looked dangerous with ball in hand.

The ball ultimately went to ground and Ulster were victorious, winning 26-20 in Toulouse.

For only the third time this season, Toulouse found themselves on the losing side of the scoreboard at home. However, with one more leg to play, Ulster will need another big game to advance to the quarter finals with just a six-point advantage.