World Cup-winning backrower Maggie Alphonsi looked at what Jack Conan needs to do against England...

World Cup-winning backrower Maggie Alphonsi looked at what Jack Conan needs to do against England on Saturday to prove that he can own the number eight green jersey.

Jack Conan will start in the number eight jersey on Saturday against England, after coming off the bench against Italy and Scotland in the two previous rounds of the Guinness Six Nations.

While he acknowledged that it was a clever move to start the 28-year-old Leinster man, former Ireland captain Brian O’Driscoll suggested that Conan is not aggressive enough while on Off The Ball on Thursday.

While she did not disagree about Conan’s physicality, speaking on Friday’s Off The Ball, former England loose forward Alphonsi suggested that he could add to the balance of Ireland’s back row.

“When you look at the back row, there has got to be that balance across that team,” Alphonsi said.

“[Conan] might not have that aggressive nature in him, as long as there are other players in your back row or your back five that have that, then you have got the balance across the forward pack.”

Alphonsi looked at what Conan could do instead of looking to dominate the game with his physicality.

“When you think about the number eight role, you are a key decision maker as well as a big ball carrier,” Alphonsi said.

“[A number eight is] someone who is there to provide a platform, especially for that fantastic Ireland backline to have something to launch off.

“For Conan, I guess the reality is playing a smart game; especially against England.

“He needs to outplay his opposite number eight, so Billy Vunipola. You do want to fight physicality with physicality, so that is going to be key.” 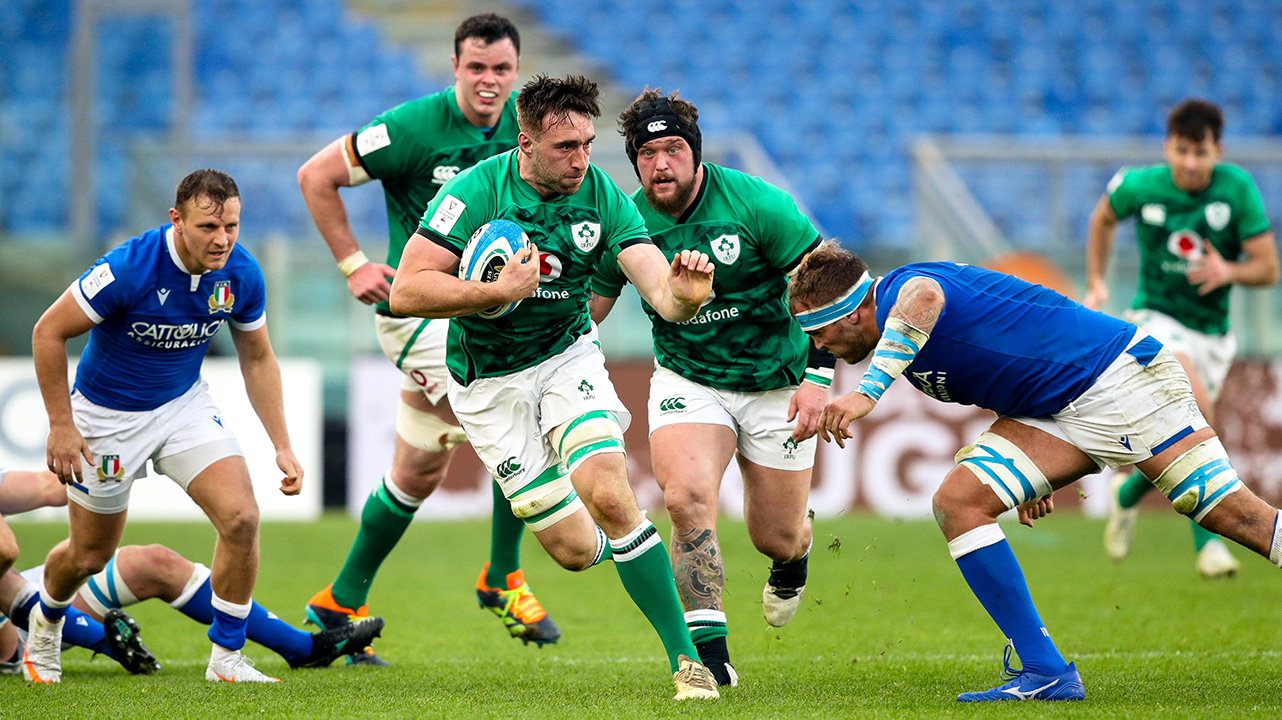 Jack Conan of Ireland is tackled by Niccolò Cannone of Italy during the Guinness Six Nations Rugby Championship match between Italy and Ireland at Stadio Olimpico in Rome, Italy. Photo by Roberto Bregani/Sportsfile

The presence of CJ Stander and Josh van der Flier in the backrow will take the pressure off of Conan to be physical, according to Alphonsi.

“Looking at Ireland’s back row in particular, you have [CJ] Stander who is a big, strong ball carrier in his last game, it is going to be quite emotional for him, so he is going to be wanting to give Ireland a platform,” Alphonsi said.

“[Josh] van der Flier is brilliant with ball in hand. So, I think Conan has to really think about what he brings to that back row.

“So, for me, being physical [is important], to meet your number eight with physicality, but at the same time it is [having a good] work rate, it is playing a smart game.

“Don’t overcommit; don’t necessarily think that because you have to try and show your physicality that you have to be everywhere and spread yourself thin.”

Conan needs to be smart

Alphonsi believes that Saturday’s game will be the perfect opportunity for Conan to show what type of number eight he can be.

“The best number eights that I have seen in my career, your Kieran Read for example, they are very smart about how the play,” Alphonsi said.

“They don’t go to every breakdown; they pick the right ones, and they make sure that they make an impact.

“That England game is the perfect opportunity for him to show what he is capable of doing.”