Ireland got the job done in Rome with a bonus point win over Italy but not many will be convinced after what was a lethargic performance.

Down below are the ratings for the team’s performance after an uninspiring win.

Quiet afternoon for the veteran after what was a fantastic performance against Scotland two weeks ago. Never really got into the game and wasn’t his usual flawless self in the air.

Good performance from the Moyross native especially considering he was playing in the centres for most of the match. Did very well to score his try after a nice step off his left foot. Great break on the 60 minute mark but wasn’t able to make the most of it after a poor pass to Stockdale. 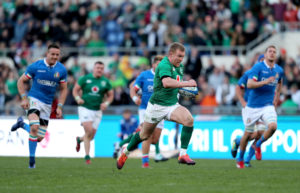 Broke the opposition’s line of defence a number with powerful carries and at times seemed to be too big for the Italians to handle. Passed well and put in a solid defensive effort also. Nothing spectacular but did everything that was asked of him.

Made a nice early break but not on long enough to be rated.

Very fortunate to be gifted a try after the Italians butchered dealing with the restart but took his try well nonetheless. Was a constant threat with ball in hand and almost created a fantastic try with the last play of the game but the pass didn’t go to hand.

Average enough performance from the 2018 World Rugby Player of the Year. Looks like he was been carrying a bit of an injury and passed the place kicking duties on to Murray. Will need to improve if Ireland plan on challenging for the title. Looked unhappy going off with a few minutes to go.

Improved as the game went on but far from his finest performance in a green shirt. Hasn’t been able to rediscover his form after returning from a long term injury. Ireland will need him back to his best if they want to beat the best. Did well to score from the maul.

Made some good carries in the loose and tackled well when it was asked of him. The scrum held up well but didn’t face the sternest of tests from the Italian pack. Not a bad performance but will have to improve if he wants to replace Cian Healy in the starting side.

Not the best performance from the Leinster speedster. Struggled with his lineout throws but a decent performance in the loose. The lineout continued to struggle after he came off so can’t be entirely blamed for its issues.

Not a bad game from the Wexford man but won’t be catching many of the headlines. Solid in the scrum and the loose as usual but you have to feel that the big man is capable of more. 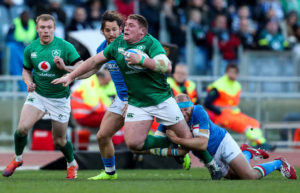 Will be happy to have gotten his first start for Ireland in a long while. Decent performance from the Connacht man but will have to do more if he wants to work his way above James Ryan and Devin Toner in the pecking order.

Strong carrying all day from the South African-born lock. Always makes an impact in defence and at the breakdown but was impressive in attack too and took his try well. The lineout misfired however which led to a few missed opportunities.

Led from the front. Made a number of crucial turnovers to halt an impressive attacking display from the Italians. Second man of the match performance in a row and is currently irreplaceable in a very competitive Irish back row.

Good to see the Tullow Tank play a few big matches in a row without getting injured but hasn’t been able to find the form he showed in the Lions tour to New Zealand. Decent performance but not yet back to his explosive best.

Didn’t make any mistakes but wasn’t able to really impose himself on the game. Arguable a little bit too small to be an international calibre Number 8 and will likely be replaced by Jack Conan for the France game if he is fit.

The starting team put in a largely lethargic performance and the bench made no noticeable impact when introduced. Andrew Conway played well enough on the wing and it was nice to see Jack Carty win his first cap even if it was only for the last few minutes of the game.

Needed to lay down a marker against the Italians after the opening two rounds but Ireland disappointed again. There are a number of big names out injured that should improve things upon their return but they should be doing better. The attacking play was uninventive again and shows no sign of improving.

'Conor Murray had his best game in 12 months' | Keith Wood