Player Ratings | Ireland back to winning ways with a powerful performance

Ireland were looking to bounce back from a heartbreaking World Cup Qualifier campaign as they hosted America in the RDS on Friday.

Player Ratings | Ireland back to winning ways with a powerful performance

Ireland were looking to bounce back from a heartbreaking World Cup Qualifier campaign as they hosted America for the first time in the RDS on Friday.

In what would be Adam Griggs' second-last match as head coach, Ireland were in search of a strong reaction to the last-minute defeat to Scotland.

The build-up to the match was overshadowed by the comments made by IRFU Director of Women's rugby Anthony Eddy during the week, which current and former players heavily criticised.

Both teams struggled to hang onto the ball throughout the first half. Neither side were able to string together enough clinical play to get into a realistic scoring opportunity.

After almost half an hour Beibhinn Parsons finally broke the deadlock with a well-worked try. The USA levelled matters through an equally well-worked passage of play, with five minutes left in the first half.

With a minute left, however, Leah Lyons put the hosts back into the lead with a powerful pick-and-go try.

The Irish held out America for the remainder of the match, securing a well-deserved 20-10 victory, in spite of a good number of errors from both sides. 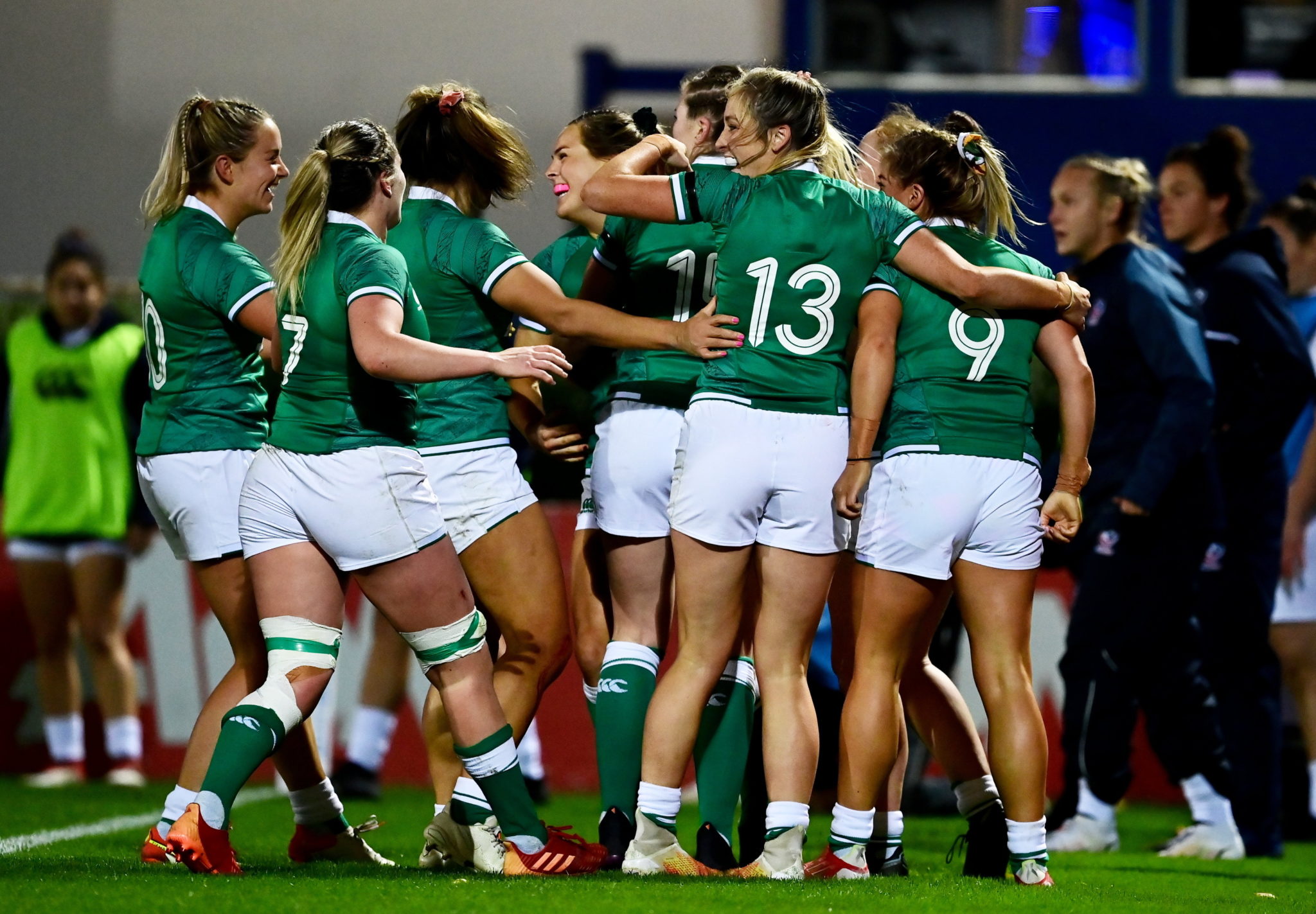 The Irish scrum was unstoppable throughout the match, with Peat being the leader in the front row. Her intervention in the the tackle in the 21st minute stopped what looked to be a promising attack for the USA. In her final match for Ireland, she was gifted a try from the back of a maul to put the icing on the cake that was an extremely inspiring career.

In a week where she was the focus of a lot of attention due to her reaction to Anthony Eddy's comments, Moloney could be forgiven for being slightly distracted. However, in spite of this she was part of a dominant scrum and maintained a good lineout success rate. 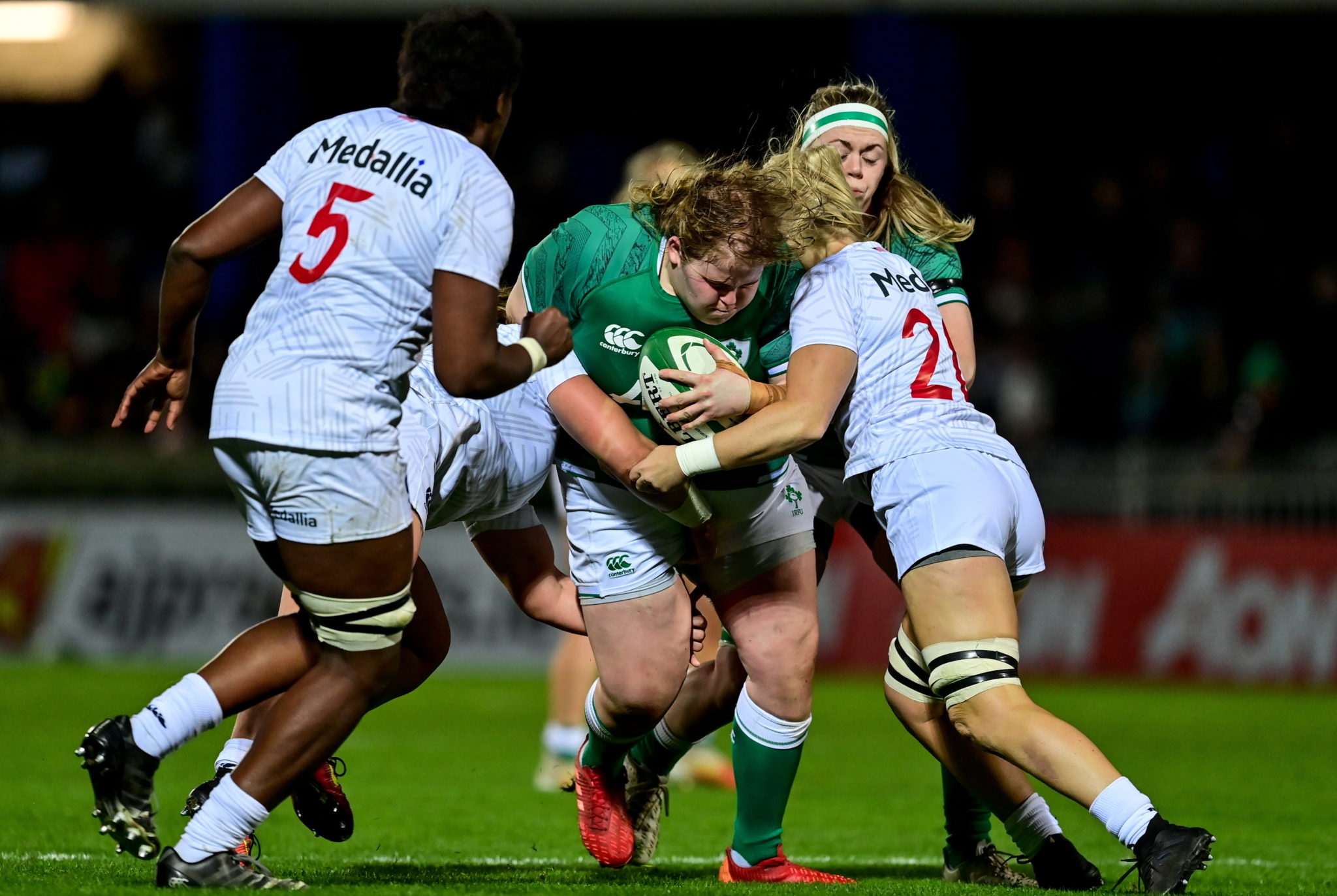 The Irish scrum was unstoppable throughout the match. Lyons made a number of strong carries throughout the match, but crucially put Ireland into the lead at half time. While she did not get through as much work off the ball as her front row partner Peat did, Lyons was vital in maintaining the lead while she was on the pitch.

The lock made some errors early on, but quickly made up for them by winning a crucial penalty. Fryday was the go-to lineout jumper throughout the match, being dominant in the air. She also made a massive contribution defensively. She was a deserved player of the match. 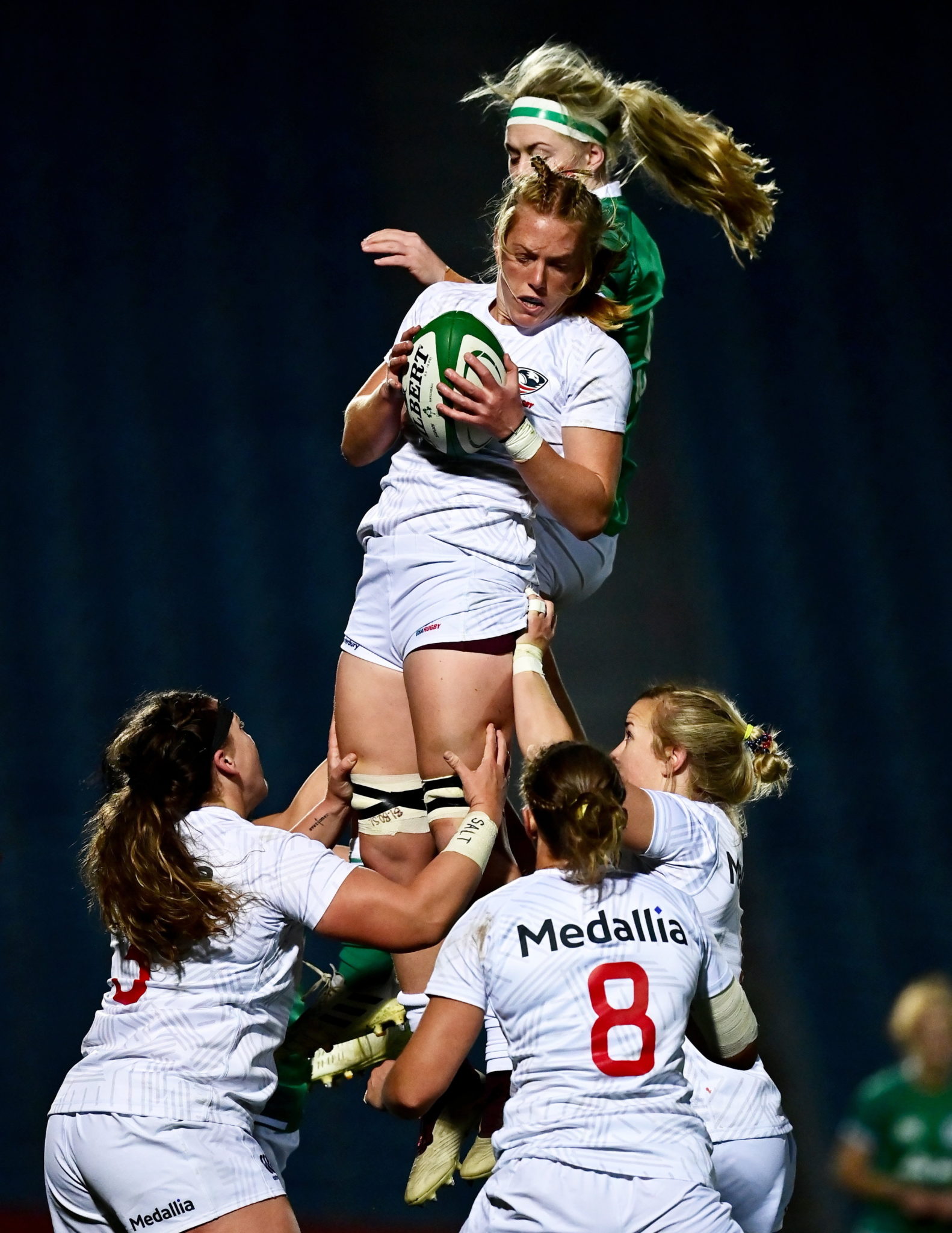 While not utilised at all in the set piece, Monaghan's biggest impact on the match was her tackle count, which was among the highest for the Irish.

The Irish captain led from the front both on and off the field all week, and inspired her side to powerful performance in the hour that she was on the pitch. While there was no outstanding moment from Griffin throughout, she put together a solid performance to give Peat a memorable sendoff.

Edel McMahon was second only to Anna Caplice in terms of her impact on the run, with some strong and influential carries in the middle of the pitch. She did, however leave too much for her teammates to do at the ruck, opting to let the likes of Stacey Flood and Eve Higgins make their mark in that area.

In her return to the Irish side since her unexplained omission from squads since 2019, Caplice was strong running off the back of the scrum with every possession. She proved to be what Ireland have been missing from the base of the setpiece and showed the difference that a ball-carrying number eight can make. 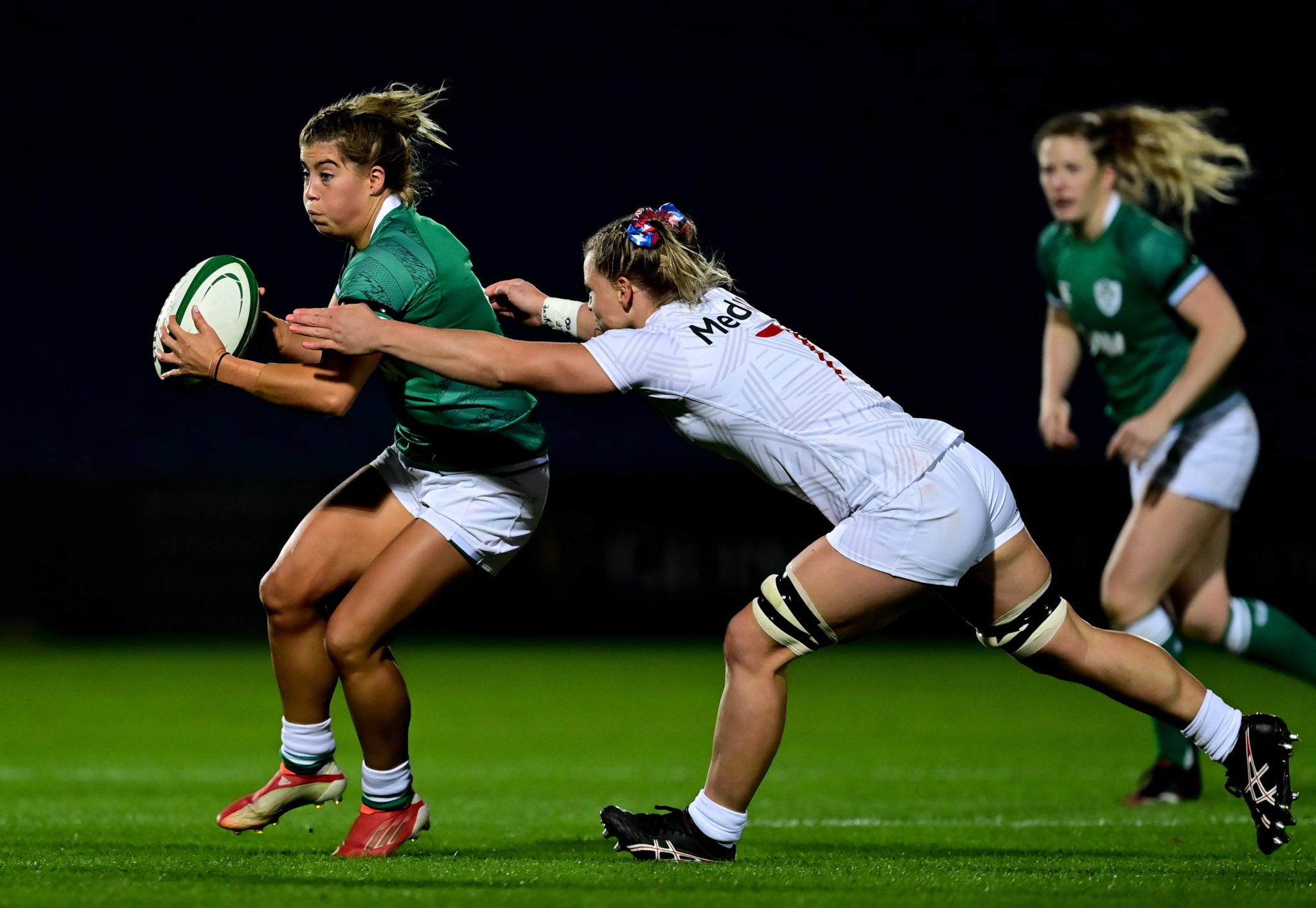 Off the back of a very promising interpro series, Leinster's Ailsa Hughes marked her return to test rugby since 2019 with a solid performance behind a dominant pack. Defensively, Hughes made intelligent decisions, and on attack she put her backline on the front foot with accurate and quick distribution.

Stacey Flood was crucial at the breakdown in a number of key moments, but wasn't always rewarded for her hard work due to infringements elsewhere. She put together a number of good, attacking kicks, including the one that found an open Beibhinn Parsons to score the opening try of the match. She looked calm and composed at 10 throughout, however her goal-kicking will need to improve in order to truly compete with the worlds' best.

Parsons had a lot to do when she regathered Flood's cross-kick, but did it well to score untouched and open the books for the hosts in the first half. However, she was otherwise unable to get a foothold in the match, looking exciting whenever she got anywhere near the ball, but those moments were few and far between.

A relatively quiet game by Naoupu's standards, as the Irish centre pairing failed to fire as a unit. Defensively, however, Naoupu was key in defending their own 22m, particularly in the second half. 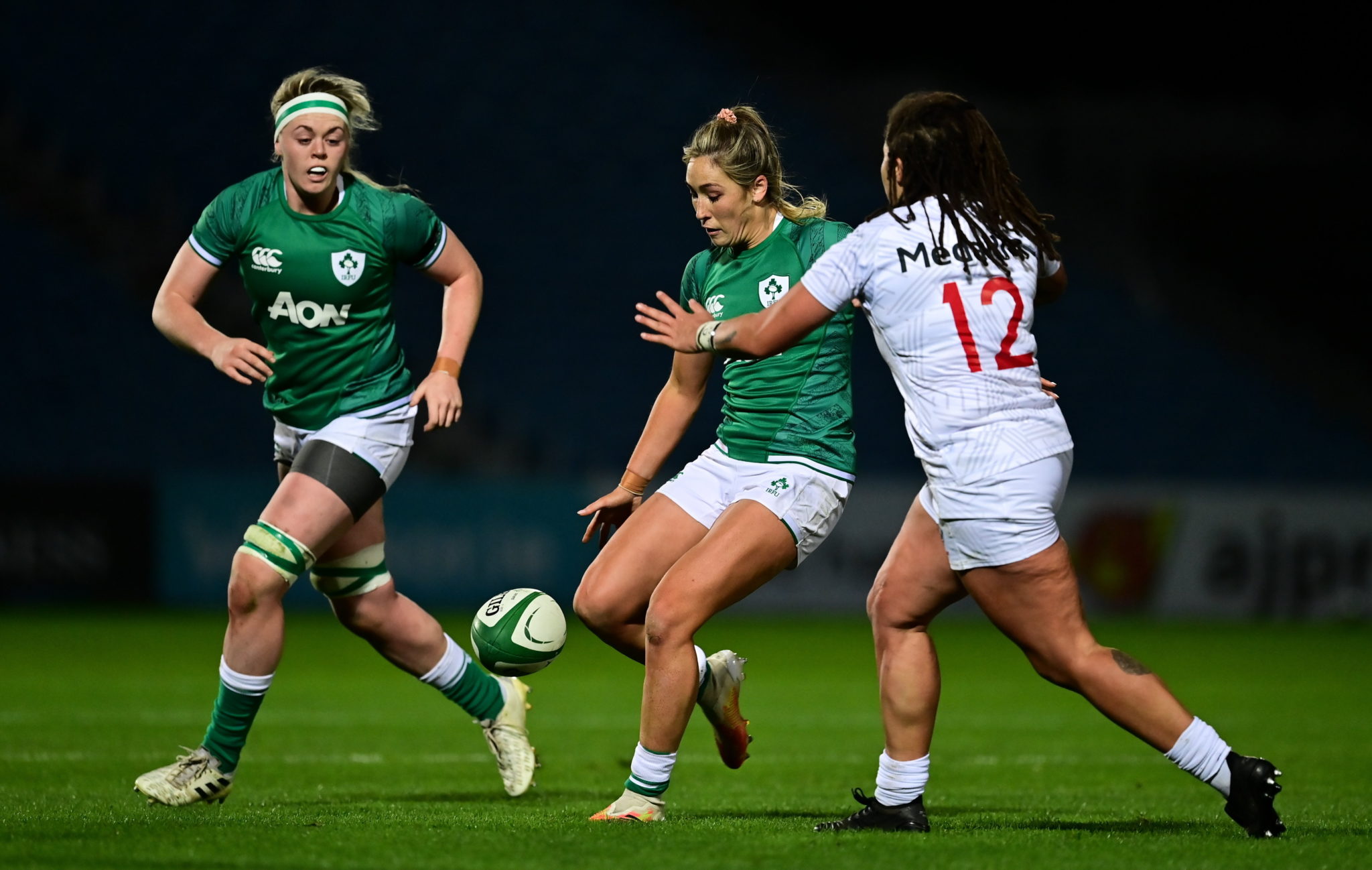 Partnering with Naoupu for the first time in the centre, Considine took a while to get used to her new role at outside centre, having previously gotten all of her caps at either fullback or wing. Her timing on the inside line often led to a dropped ball, however her eye for space remained strong. She was not offered much opportunity to settle in the second half, being subbed off on the 54th minute, having shown a lot of potential, but no real execution.

While the ball was seldom spread to her wing, Laura Sheehan was unable to get too much traction in the match. In the build-up to USA's second try, it was a passive tackle from Sheehan that opened the space for Elizabeth Cairns to score. 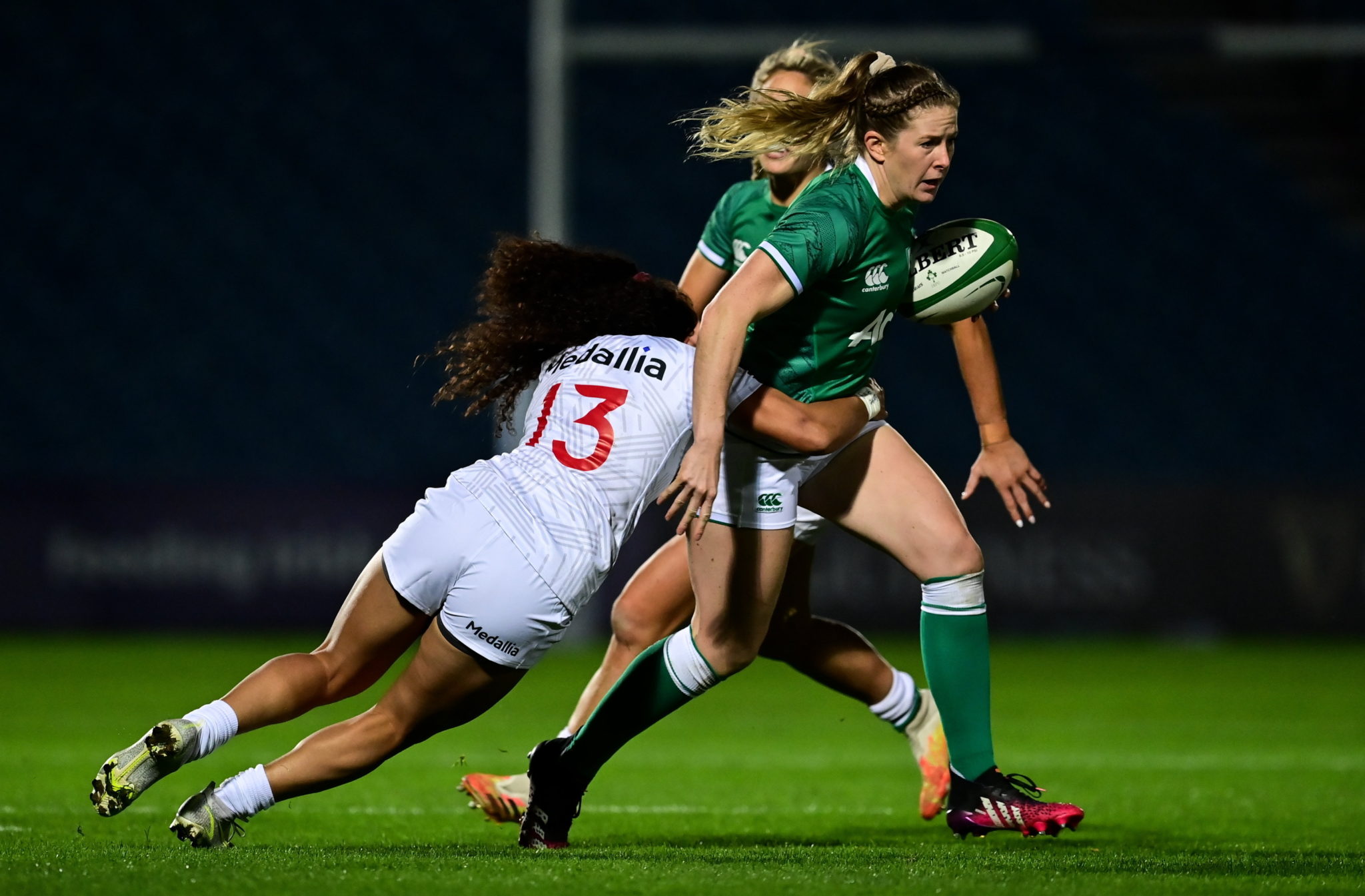 With limited ball, Lauren Delaney was able to put together some good carries from the back. She was a solid last defender, stopping a few promising movements in their tracks. She was crucial in saving a try late in the second half and controlled the defensive lines well from the back.