'Keenan has something that Kearney never did' | Could Keenan be better than Kearney?

Hugo Keenan has an extra element to his game that Rob Kearney never had for Ireland, according to...

'Keenan has something that Kearney never did' | Could Keenan be better than Kearney?

Hugo Keenan has an extra element to his game that Rob Kearney never had for Ireland, according to James Downey.

Keenan has more than secured his place as the first-choice fullback for Andy Farrell after three exceptional performances in the green jersey in this years’ Six Nations.

For Downey, Keenan’s security under the high ball, his solid defence and his attacking threat have combined to make the 24-year-old the perfect replacement for Kearney.

The former Leinster and Ireland centre was speaking OTB Sports after Ireland’s 48-10 victory over Italy on Saturday and suggested that Keenan was the success story of the year.

“For someone to emulate Rob [Kearney], who was so solid and secure [is a big ask],” Downey said.

“When someone like that leaves and then you kind of forget about it when they are gone.”

Downey suggested that Keenan has solved the questions from last year about the balance of the Irish back three.

“I think that Keenan has come in there and just made the position his own,” Downey said. “There were so many question marks around who was going to go there.

“Jordan Larmour [and Jacob Stockdale] had a couple of chances, and to be brutally honest he wasn’t good enough at the time, with the simple errors that Rob Kearney was never making.

“If you are not getting your positional sense right, getting your kicking game right and catching the ball because you are going to be bombarded.

“You see Keenan who is just safety personified at the back.” 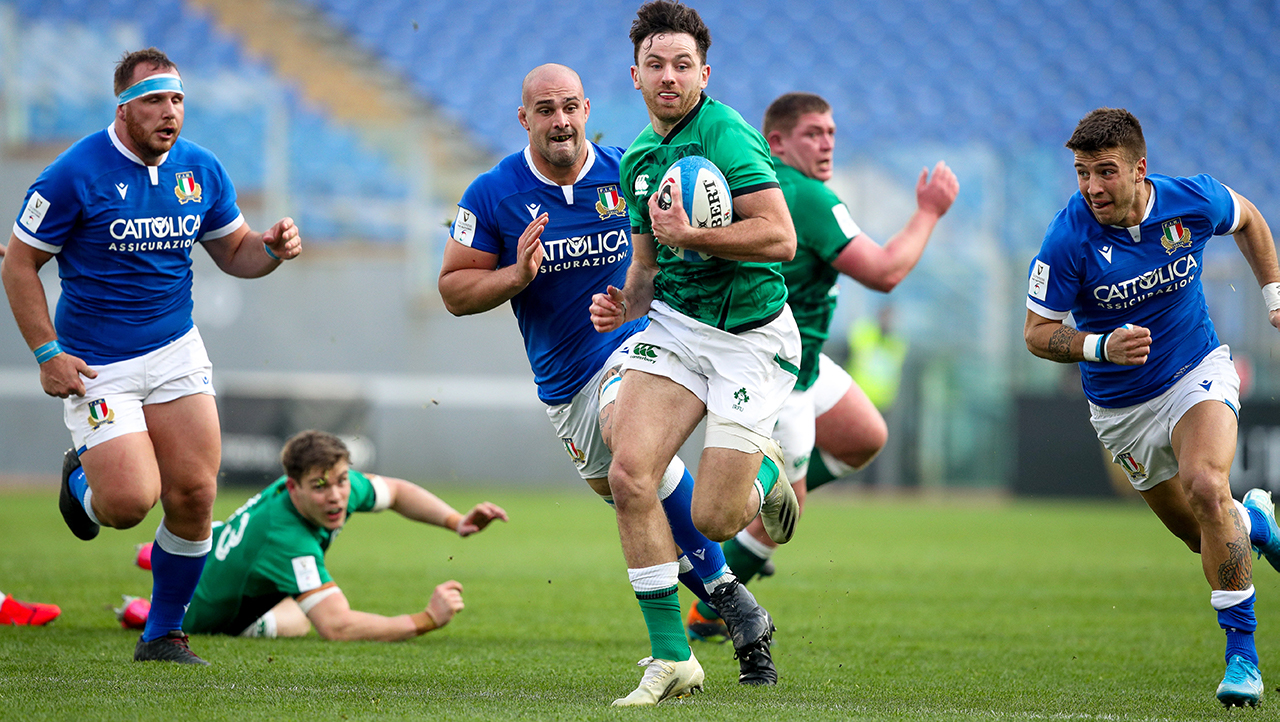 Hugo Keenan of Ireland makes a break on the way to scoring his side's second try during the Guinness Six Nations Rugby Championship match between Italy and Ireland at Stadio Olimpico in Rome, Italy. Photo by Roberto Bregani/Sportsfile

Keenan has something that Kearney never did

While emulating the absolute trust at the back that Kearney had for so many years is no easy feat, Downey believes that Keenan has extra qualities that could make him even better than Kearney was for Ireland.

“He is so solid under the high ball, but he adds that attacking threat and he adds that extra bow that I don’t think Rob Kearney had,” Downey said.

“That attacking threat and that ability to accelerate out and beat the first defender every time.

“He has that composure at the back, and it is what you need. He has really stepped up and made it his own.”