Appearing on Tuesday morning’s OTB AM, former Irish international Keith Wood discussed the depth of Ireland’s front row, in the lead up to their first Six Nations game against Scotland on February 1st.

Wood believes that Andy Farrell has a wealth of players to choose from; a positive that has not been seen in the Irish set-up in previous years.

Tadgh Furlong is Wood’s first choice at tighthead prop, describing the 27-year-old as “like a national treasure.”

The Munster legend also expressed his concern about the amount of rugby that Furlong has played in the calendar year, and the need to see him have a summer’s rest following the conclusion of this season. 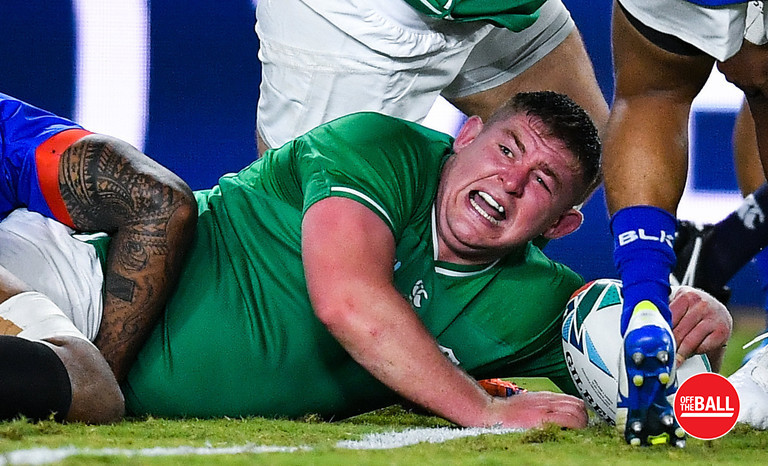 12 October 2019; Tadhg Furlong of Ireland celebrates after scoring his side's second try during the 2019 Rugby World Cup Pool A match between Ireland and Samoa at the Fukuoka Hakatanomori Stadium in Fukuoka, Japan. Photo by Brendan Moran/Sportsfile

With Furlong’s ability, Wood expects the Wexford native to continue to perform for Ireland at the top level, provided his body is managed going forward.

There are several young players pushing Furlong, and if he is due to sit out some games, there is an opportunity for others to impress Andy Farrell, and Andrew Porter is best placed to assume this role.

At 23, Wood is hopeful that Porter will have a decade of international rugby ahead of him to look forward to, although Wood thinks he has a lot to learn to displace Furlong any time soon.

In the third position on the depth chart, Wood chose John Ryan. Marty Moore and Keynan Knox made up the final places at numbers four and five respectively.

Both are hugely talented, says Wood, however, their development will depend on whether or not they will manage to play in many games in the near future.

The lack of a clear second choice at hooker during Ireland’s World Cup campaign hampered Ireland’s chances, according to Wood.

Rory had a fair few bad games in the last 18 months and yet none of the other guys have risen to that level. Since then, they still haven’t [performed to a level]”, said Wood.

The problem still exists, while Ronan Kelleher continues on the sidelines after sustaining a broken hand in a club game for Leinster.

Wood feels it is too early for Kelleher to be rushed back in anticipation of the Six Nations opener and prefers that the 21-year-old to begin the campaign on the bench provided he is fit.

With Kelleher out, Scannell marginally claimed Wood’s top spot, with Rob Herring at number two. Sean Cronin made up the final place on Wood’s list of names at hooker.

With little to separate any of them, the former World Player of the Year called on all three to up their games and make the jersey their own before the Six Nations opener against Scotland.

Note: Ronan Kelleher is currently injured (broken hand) and is unavailable at present.

One of Ireland’s long-standing servants, Cian Healy, is still firmly entrenched as the number one player in this position.

Behind him is David Kilcoyne and making up the ranks is Dublin-born Jack McGrath, who impressed Wood with his response to leaving Leinster and finding himself on the outskirts of a starting position for Ireland.

In contrast to the wide range of youthful players vying to break in at tighthead, there is less jockeying for position at loosehead. 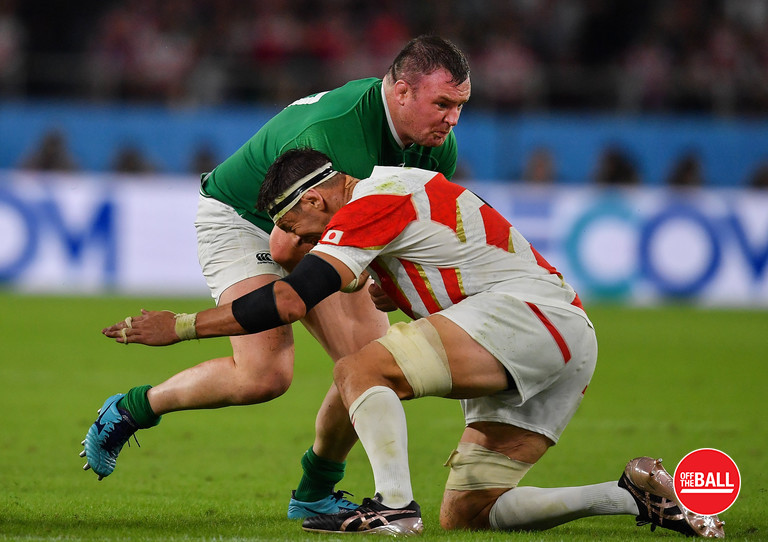 28 September 2019; David Kilcoyne of Ireland is tackled by Luke Thompson of Japan during the 2019 Rugby World Cup Pool A match between Japan and Ireland at the Shizuoka Stadium Ecopa in Fukuroi, Shizuoka Prefecture, Japan. Photo by Brendan Moran/Sportsfile

With Healy, Kilcoyne, and McGrath all in their thirties at present, there is a necessity for Farrell to introduce some new blood.

It is important to ensure that these younger players are given opportunities to play at club level too, according to Wood:

“There are a next layer of guys that are coming in, we just haven’t seen a huge amount of them on the field.

We’d like to see them a little bit more, and be it at AIL level, be it at PRO14 level, whatever it is to try and get them through. But those kids are there, so because of that I’m not that worried by it.”

Wood is confident of the next generation of players coming through, specifically mentioning Munster’s Josh Wycherly, who has impressed of late with the Under-20s.

Having viewed the options in the front row, and compared them to previous national squads, the Limerick native is optimistic as Ireland look towards the Six Nations.

There are certainly challenges that will need to be addressed, namely finding a replacement for Healy in the coming years, and the lack of a stand out star at hooker.

However, Ireland are certainly in better standing than years gone by where Ireland were “very bare,” said Wood.

With a new manager at the helm and a mixed blend of veterans and youthful enterprise dotted throughout the squad, all eyes will now turn towards the Aviva Stadium in Dublin, anticipating a strong reaction from Ireland following their disappointment of last year's World Cup.