'I swapped jerseys with Jones, it was the natural thing to do. Three weeks later mine arrived back in the post'

Ireland go to Cardiff this weekend with a chance to retain their Six Nations crown and the opportunity to upset Wales' Grand Slam party.

But 10 years ago, the roles were very much reversed.

Brian O'Driscoll led his team to a first Grand Slam in 61 years, with Ronan O'Gara kicking the iconic winning drop goal to beat the Welsh and make history for the visitors.

But as memorable as the Munsterman's drop goal was, the game will also be remembered for the Stephen Jones last-gasp penalty kick that fell agonizingly short of the posts.

Speaking on Friday's OTB AM, Ronan O'Gara relived the game a decade on and the revealed what he said to Jones after the game.

"Earlier in the game, he had the capacity to kick that 50 metres," he said. "It just shows what fatigue does to you.

"I'd played on Lions Tours with Stephen, competing with him for many years. It was important that you show the values you learned in rugby.

"I swapped jerseys with him, it was the natural thing to do. Three weeks later my jersey arrived in the post. It just sums up how nice a guy he is." 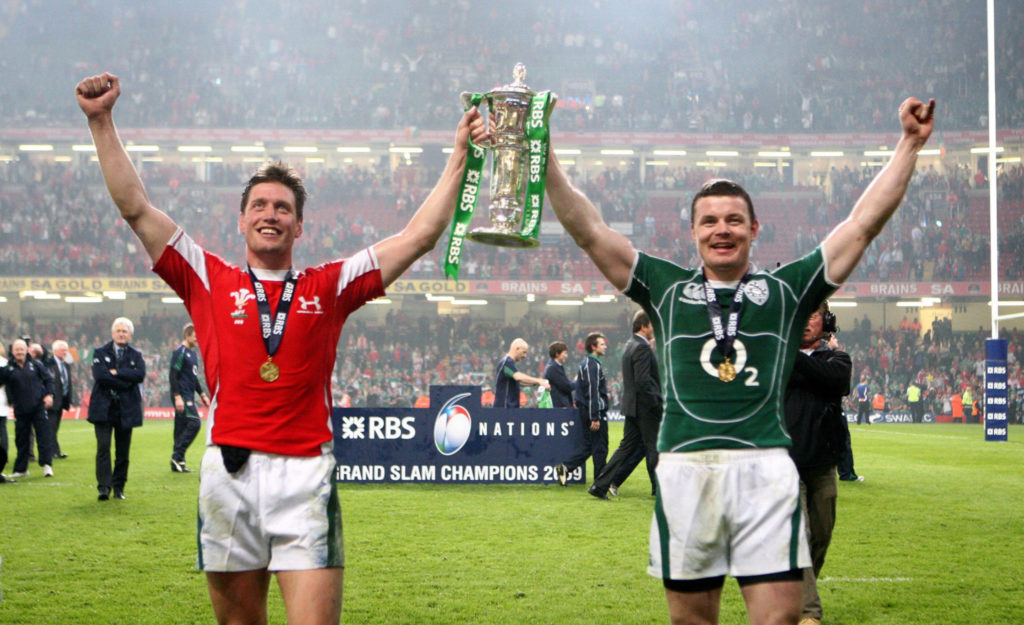 Ronan O'Gara wearing Stephen Jones' jersey as he celebrates the Grand Slam in 2009.

O'Gara explained that learning from previous 'massive failures' helped equip him for the pressure of the the biggest kicks in the biggest games.

"I get what being a kicker is and missing it. I think that's what experience tells you.

"When I was in Twickenham with Munster, missing kicks that would have won a European Cup medal for guys I really care about - but wasn't good enough to kick it over that day.

"That haunts you as a kicker. I got great advice from Woody at the time and he just told me to address the problem, don't sweep it under the carpet.

"It'll come back to fight you in a final or semi-final. That's what real pressure is.

"It might hit you once a season or once every three years, but address it. That's what made me, that massive failure in Twickenham.

"I get the mindset of a kicker and what goes into the preparation."

'I'd played on Lions Tours with Stephen [Jones], competing with him for many years. It was important that you show the values you learned in rugby.'

'I swapped jerseys with him, it was the natural thing to do. Three weeks later my jersey arrived in the post' 💭 pic.twitter.com/1MlsV8Tlca

Everyone’s in the Team Of Us.
Vodafone. The Official Sponsor of the Irish Rugby Team.