The Six Nations returned on Saturday, with Ireland looking to exorcise their demons from last year's championship.

It's the most wonderful time of the year, for a rugby supporter. The Six Nations returned on Saturday, with Ireland looking to exorcise their demons from last year's championship when they lost their opening game to Wales.

While Wales are defending Six Nations champions, they came into the match with almost no expectations on them, as Ireland were clear favourites.

The hosts, however, were coming off the back of a huge November series which included another great win over the All Blacks, and a dismantling of Argentina and Japan in the Aviva.

With 11 starting players in the XV, Leinster's form in Europe was expected to translate to form at the international level. However, a somewhat surprising run-on debut for Mack Hansen was the major talking point for Irish fans.

Hansen lit up the Aviva almost immediately, with a 60-meter run with his first touch. It eventually led to a try out wide for Connacht teammate Bundee Aki, as Ireland looked dominant from the outset.

While Wales hardly looked threatening themselves in the first half, the Irish defence held up and took the hosts to a 10-0 lead at half time.

With the wind in the favour in the second half, Ireland were much more clinical on attack, capitalising on their positive play by scoring two quick tries.

Wales could not fire a shot throughout the rest of the match, however it took a rare error from Tadhg Beirne for Taine Basham to sore under the posts.

That would be the final movement for the visitors, as Ireland secured a 29-7 victory to kick off their Six Nations. 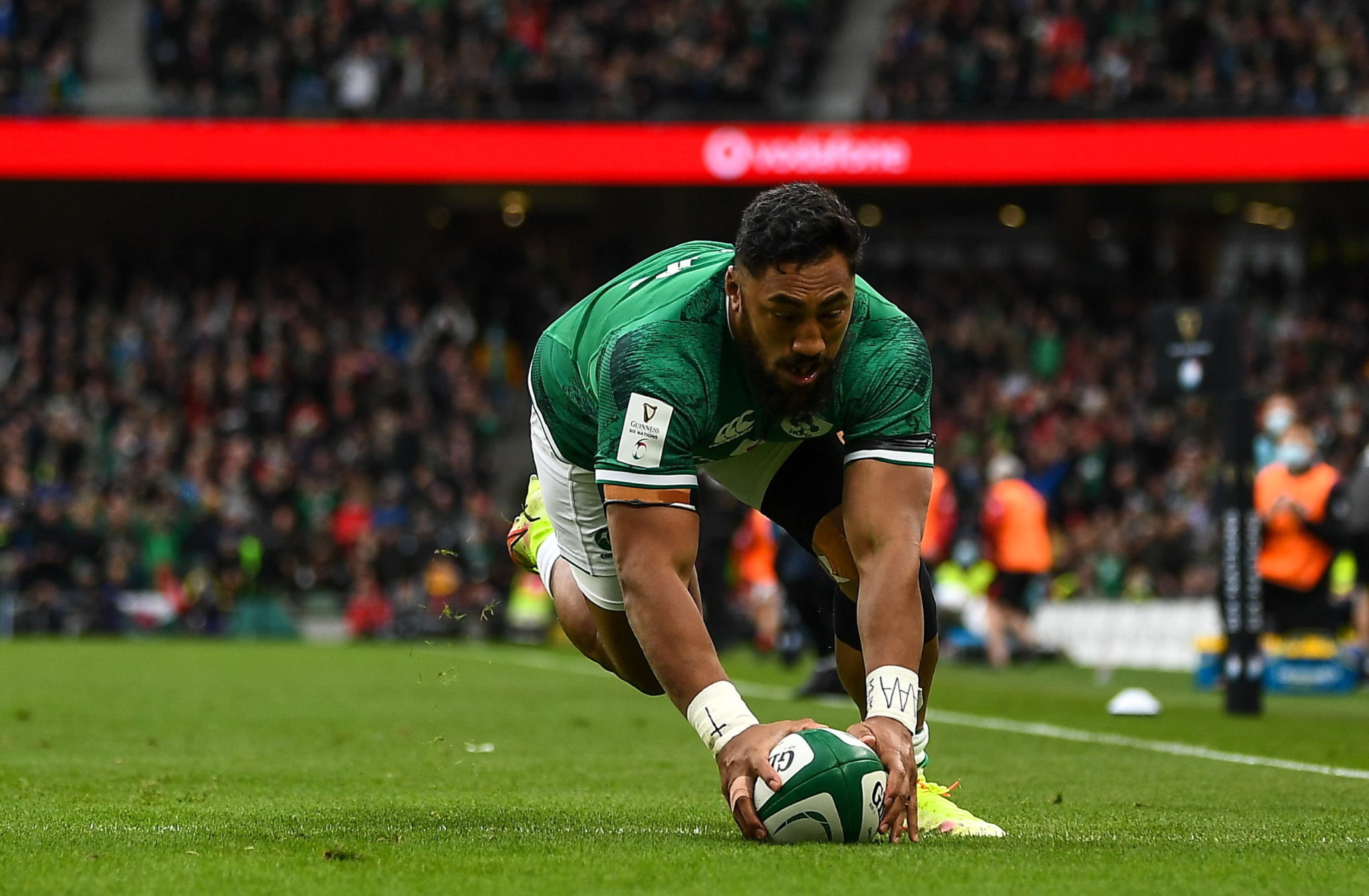 The Irish front row is changing how a front row is seen in World Rugby, with Porter's jackaling one of the key differences between him and the rest. He was the anchor to a dominant scrum performance, and made the most of this dominance by winning penalties against a struggling Welsh scrum.

Part of one of the most mobile and creative front rows in world rugby, Kelleher was excellent throughout the game. Kelleher made a lot more meters than the rest of the tight five, making a big impact with ball in hand, while also making himself known at the breakdown. 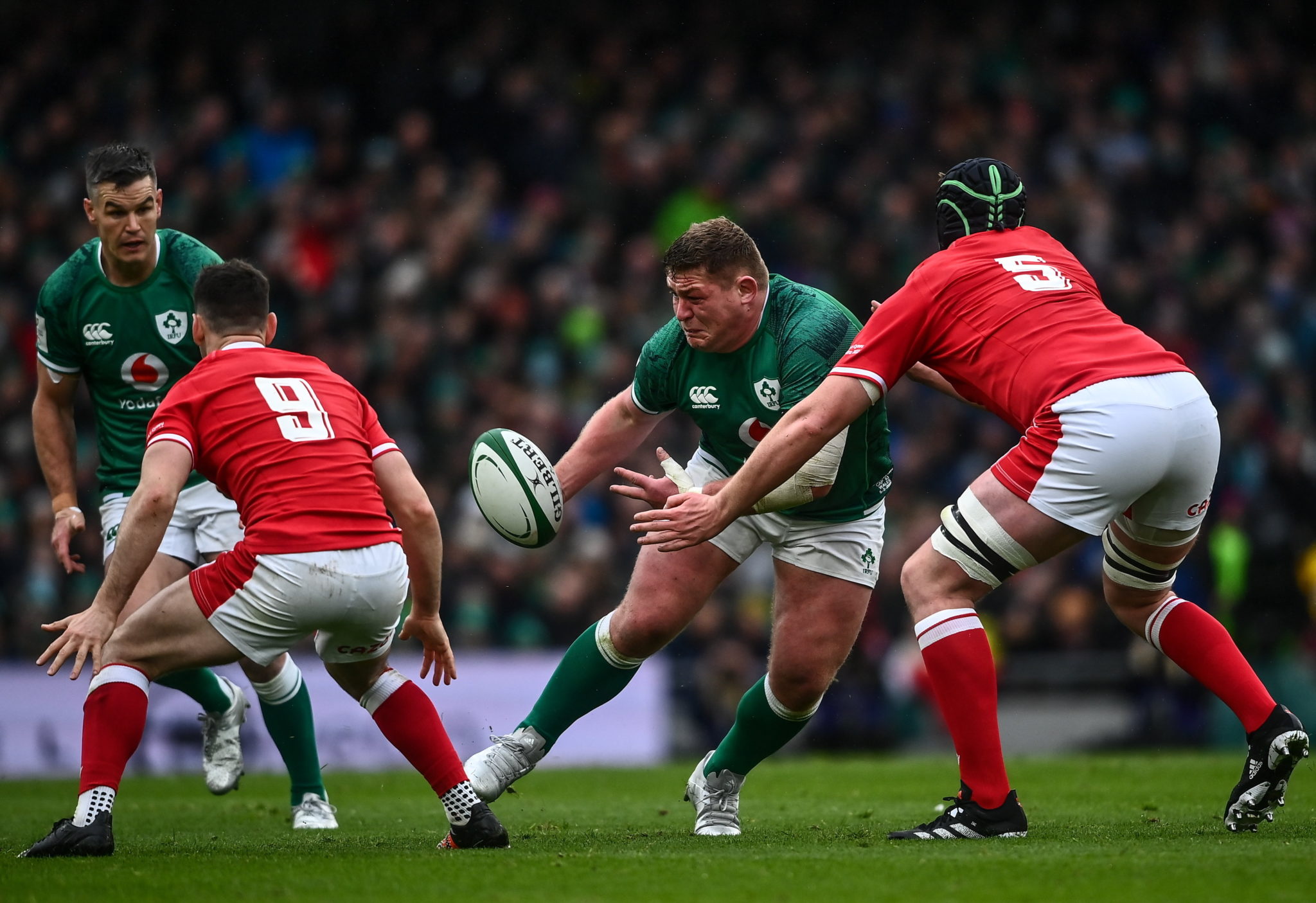 If Ireland are looking for a second playmaker, they must look no further than Furlong. As Andy Dunne alluded to, Furlong's ability to choose the correct pass and open a gap outside him is second to none. Additionally, the Irish scrum looked dominant throughout the match, with Porter and Furlong packing down well.

Andy Farrell has been looking for a successor to Johnny Sexton. Well, maybe he's been looking in the wrong place? Perhaps he should start the Wexford farmer at 10 against Italy to find out.

The only non-Leinster man in the forward pack, Beirne didn't look out of place in the starting side. He defended exceptionally well, holding play up to allow for his teammates to set in defence. He was a pillar at the lineout, securing possession on Ireland's throw, and making life increasingly difficult for Wales on their throw.

Like Beirne, Ryan was a towering figure in the Irish lineout, maintaining possession on every throw, calling the setpiece superbly and leading the way overall. However, his goal-line defence was particularly strong late in the first half, and he did well throughout his 66 minutes both on and off the ball to disrupt Welsh ball. 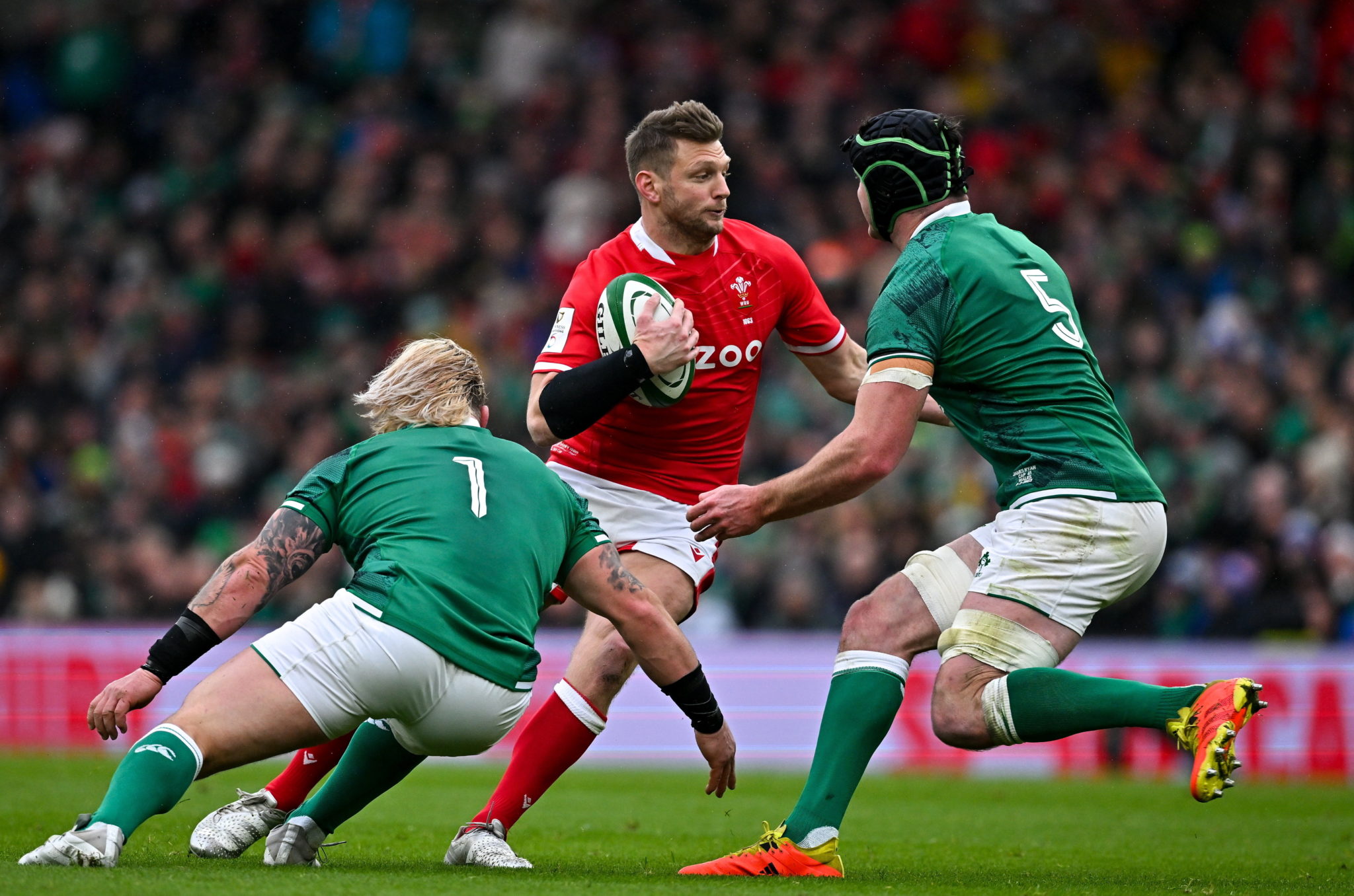 The famed Irish and Leinster back row, which Stephen Ferris somewhat optimistically called 'the best back row in world rugby' before the match on RTE, were all over the Welsh rucks. While they did not win every ruck, they slowed the Welsh ball at the breakdown and allowed the defence to set.

Doris and his back row teammates were not the go-to carriers throughout the match, they were crucial to the defensive work that kept Wales scoreless in the first half.

Like his Leinster and Ireland teammate Doris, Van der Flier did a lot of work off the ball rather than on it, although there was the occasional big break, particularly in the second half.

He was crucial in Ireland's breakdown success, and his tackling not only was successful, but it was effective in slowing the Welsh attack down, allowing the defensive lines to reform around him. Additionally, he was a crucial part of Ireland's lineout, both on attack, and defence. 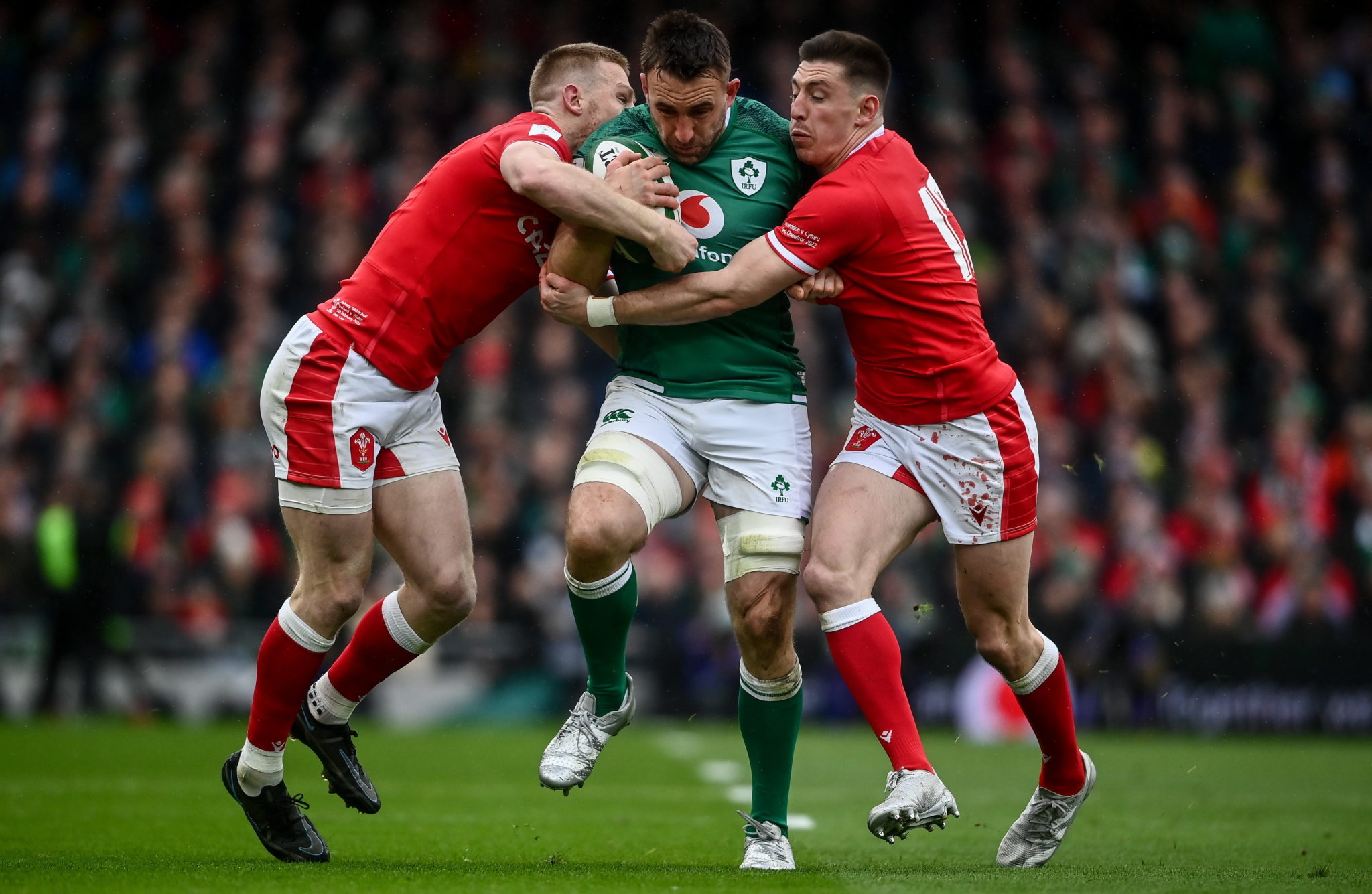 The British and Irish Lion sensation from 2021 was in superb form again in green, making a number of strong carries and defending incredibly well too. He was unmovable over the ball at the breakdown, and was crucial in keeping the Welsh out for most of the game.

Although he is famed for his distribution, Gibson-Park faltered a few times with his passing from the base of the ruck. He did get quick ball out when it was required, and looked to speed up play when it was on, and slow things down when it wasn't. However, Gibson-Park's overall performance left a little to be desired, particularly in the windy, wet conditions.

The Irish captain has been the standout performer for his country since he dragged the 10 jersey off of Ronan O'Gara. While he is still the form 10 in the country by some distance, his form with the boot was not ideal. He was the target of some late hits and went down a few times throughout the match, however his second half was a mile better than his first.

Some errant kicks at goal were joined by some uncharacteristic errors with ball in hand to mark a surprisingly inconsistent performance. However, when Sexton was good, he was great, and when he was poor, he was still miles better than his opposite number. 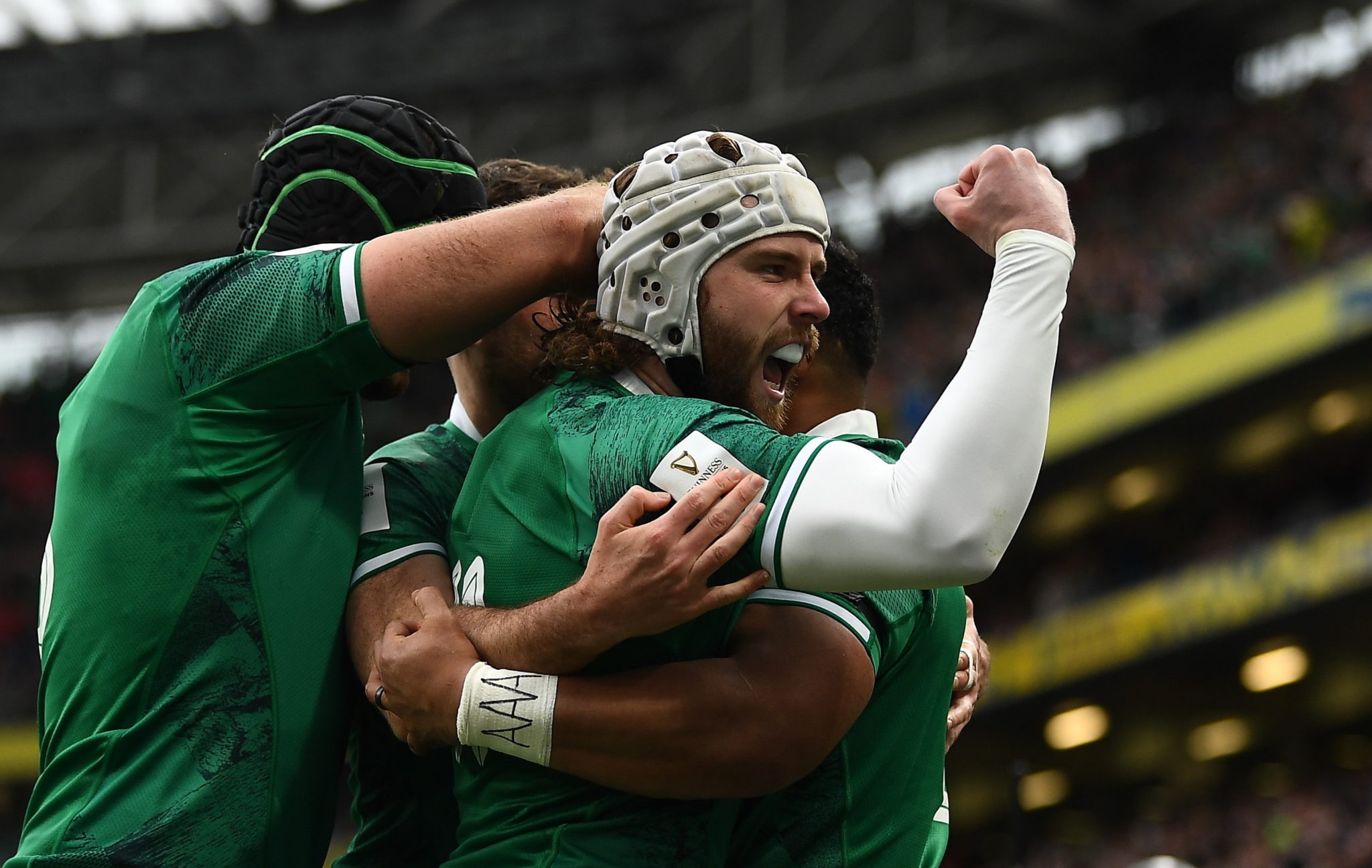 An uncharacteristic Sexton error led to the dream debut run from Hansen, which eventually ended up in Bundee Aki crossing over for the try. Hansen was everywhere from the start. He was not afraid to put in the hard work, joining rucks out wide, and not doing too badly in them either.

He was the deserved player of the match, and is looking like he's going to be a mainstay in this Six Nations campaign.

Aki was the biggest ball-carrier for Ireland in the first half, making over 50 meters with just nine carries. While he did not have a lot to do to score the opening try of the match, the Connacht centre was powerful and dominant against a poor Welsh midfield.

Ringrose looked penetrating with every second run he made in the first half. His running lines cutting into the folding Welsh defence almost always found the half gap and gained meters. He was electric throughout the match, and was rewarded for his scything runs with a try in the second half. 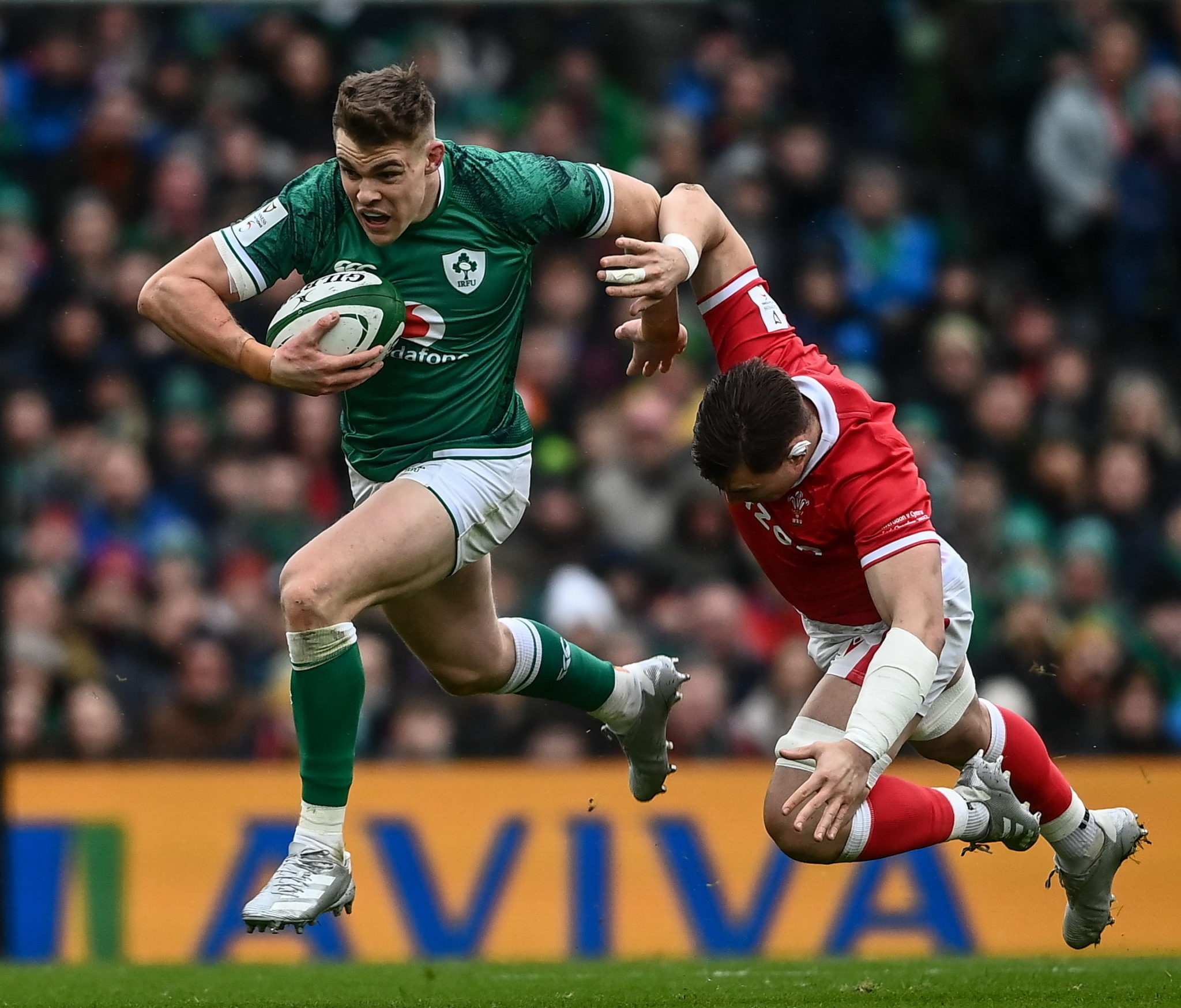 While Hansen stole the headlines, Conway made no mistakes, particularly under the high ball, and chasing up-and-unders. He scored a brace, one of which will likely be the easiest try he will ever score in green. The threat he posed out wide helped Ringrose score his try in the second half, as the Welsh defence could not commit to one runner or the other.

How is anyone going to pry that 15 jersey off of Keenan? He is consistency and coolness personified at the back, and has hardly set a foot wrong since his debut. However, in a windy, miserable, yet still dry day in Dublin, Keenan did drop a few high balls that he would have otherwise made in his sleep.

With just over 18 months before the next World Cup, Ireland might benefit from Keenan becoming slightly more creative from the back.