Ireland beat Wales 24-14 in Round Two of the Six Nations on Saturday. It was the best performance from the Irish rugby team in at least 12 months. Robbie Henshaw was one of many players to stand out for the right reasons.

Robbie Henshaw was the first star of this generation. Before there was Jordan Larmour, before there was James Ryan and before there was Tadhg Furlong, there was Henshaw. He made his debut for Ireland in 2013 at just 19 years of age. Seven years later, Henshaw is still a young player. Joe Schmidt made him an integral piece of his backline, but he also limited the centre's ability to impact games.

Henshaw moved from Connacht to Leinster to become Brian O'Driscoll's replacement at both levels. That's not exactly what happened.

Schmidt relied on Henshaw for his physicality and defensive prowess. He took Henshaw's skill set and watered it down by limiting how expressive he could be with the ball. Henshaw, like most Irish players, played consistently well but played in a role that saw him either crash the ball into contact or sit off while the forwards maintained possession. Henshaw's versatility wasn't on show, ironically it only cropped up when Schmidt played him at fullback against England in the 2019 Six Nations opener.

Although he began this year's campaign on the bench, injury to Garry Ringrose gave Henshaw the chance to play 13 in Round 2 against Wales. He failed an HIA after 45 minutes, curtailing his contributions on Saturday, but in those 45 minutes, he starred.

There was a sequence from 13 minutes in the first half that captured Henshaw's quality and Ireland's quality.

The first phase comes off a lineout near midfield. Rob Herring connects with Peter O'Mahony on a shortened call. Conor Murray begins the play in the five-metre channel, running laterally to take the ball from the top. In recent years, Ireland would have a predictable setup for its first phase. The ball would go to first receiver, most often C.J. Stander, who would crash the ball into contact. Jacob Stockdale and Johnny Sexton are the first receivers in this pod.

Murray skips his first two backs, hitting Bundee Aki wide instead. Aki drifts as the ball arrives so he attacks the outside shoulder of the widest initial defender. Instead of carrying the ball, Stander follows behind Aki to clear out the ruck. 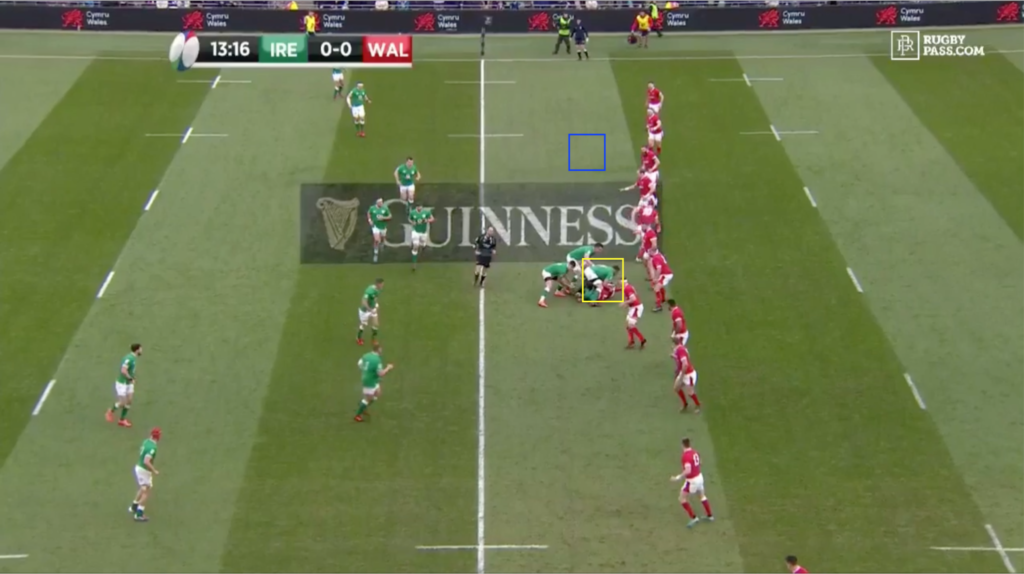 Instead of attacking the out half's channel to set up where the blue square is, Ireland gives themselves quick ball in the middle of the field. This is the best attacking position possible. Wales have to treat both sides equally and split their numbers to both sides in a hurry. When there's a tighter blindside, it's easy to leave one or two defenders who are in position to usher any ball carrier over the sideline. When the initial setup is so far away from the sideline, it forces the defence to actually organize and defend space.

Ireland has a set-piece move called. Tadhg Furlong acts as first receiver but only as a decoy to pop the ball back to Sexton. Murray purposely puts the ball on his back hip, allowing Furlong to angle inside to hold the defensive line as he pops the ball backwards. Josh Vander Flier runs a line inside too, to hold the defensive line as the ball goes out the back to Henshaw. Nick Tompkins, the inexperienced Wales centre who had a rough outing, reads this play perfectly.

The celebrated young Tompkins, who is actually only 18 months younger than Henshaw, is bullied by the Irish player at the point of contact. Henshaw creates forward momentum from a difficult spot. Had he got the ball through his hands, Ireland had an overlap on the outside. It would have required quick hands from he and Jordan Larmour to get the ball to Andrew Conway.

From there, Ireland has three phases. Each phase sees them attack the defence in a different way. On the first phase, Sexton receives the ball from Murray and takes it to the line. He has Cian Healy on his outside shoulder with Iain Henderson on his inside shoulder. The defence comes up fast so Sexton smartly pops the ball inside to Henderson. As that ruck forms, Sexton drops back to receive on the second phase. This time the ball goes to Aki with a decoy runner widening the defence's alignment in front of him.

The third phase sees the ball go directly to Tadhg Furlong for a carry. Furlong didn't make ground on this occasion. He would score a try later as he was heavily involved throughout the game.

Rugby is obviously a sport of great physicality. The team that wins that physical battle goes a long way to winning the game. But it's not as simple as big bodies colliding. A great ball carrier such as C.J. Stander is much easier to stop when the defence knows when and where he's going to carry the ball. Changing the point of attack constantly to pull and push the defence in different directions sets the attacking team up to win at the point of contact. That's what Ireland did on Saturday.

Offloads are also a key element of changing the point of attack to generate forward momentum. Joe Schmidt's Ireland preferred the safety and security of taking the ball to the ground. Andy Farrell's Ireland showed more ambition. Henshaw in both of the above phases carries the ball to space beyond contact so he can then look for the offload.

The second play is particularly impressive as he splits two defenders and sets Aki free before going to ground.

Offloads also help to create cleaner ball on the following phase. A well-executed offload forces the defensive line to retreat further and work back around the ruck before they can challenge for the ball. Henshaw's penetration through the defence and Aki's continuation of that penetration afforded Murray quick ball. Murray was outstanding throughout the game, providing quick, quality service that set moves in motion.

This skip pass set Jacob Stockdale free when George North was caught ball watching. North either anticipated the ball going to James Ryan or just lost focus at the wrong time. Stockdale could have offloaded to Vander Flier but instead took the ball to the ground. At the end of the gif, you can see Henshaw burst in from the left looking for Stockdale to pop the ball up for him to continue moving forward.

That energy and recognition of opportunity were there every minute Henshaw was on the field.

Whether he was used from a standing start out wide or as a battering ram inside, Henshaw helped Ireland gain front-foot ball and create a clean platform to build the next phase off of. According to the Six Nations' official matchbook, he had 10 carries for 90 metres in the game. That means he tied for the fifth-most carries and the third-most metres in the game despite only playing 45 minutes.

A fully-fit Robbie Henshaw, with the opportunity to play in space, is a very valuable entity on the rugby field. Whether he's playing 12, 13 or the first back off the bench, Henshaw's versatility should always be embraced. He's not a crash ball, defensive centre who lacks the nuance and precision to open defences up.

Often, Ireland's centre partnership has been a tell to how they would play.

Aki and Henshaw together were previously limiting. It was an overly defensive partnership lacking the creativity that Garry Ringrose's individual brilliance brought to the field. That wasn't the case in this game. Whether that's down to the gameplan of the new coaching staff, the healthy of Henshaw or the porous quality of the opponent is dependent on your perspective. Had Henshaw or Aki struggled on Saturday, then one of Chris Farrell or Stuart McCloskey could have pressed for a start against England in two weeks.

Instead, assuming health, there is no question who will start in Twickenham. The only question is if Ringrose can get back in the team when healthy. For Andy Farrell, that's going to be an incredibly difficult decision to make. Ringrose is the form centre in Ireland. Aki offers defensive steel and consistency that the coach clearly loves. Henshaw was the odd-man-out in Round One, but can he really be again if he continues to play this way?