Scotland got back to winning ways against Italy in their second last match of the Guinness Six Na...

Scotland got back to winning ways against Italy in their second last match of the Guinness Six Nations on Super Saturday.

On what is typically the final day of the Six Nations, Scotland looked to bounce back from their 27-24 defeat to Ireland a week earlier, heading into their final match of the championship against France, which was postponed earlier in the year.

Italy, on the other hand, came into the match looking for their first victory in the championship since 2015, after already securing the wooden spoon in this year's competition for the 16th time.

Franco Smith's men came out of the blocks firing, scoring first from a maul through Luca Bigi. Paolo Garbisi extended the opening lead for the visitors, shocking Scotland early.

It was a short-lived lead, however, as Scotland responded almost immediately to score in an identical fashion, with Dave Cherry capitalising from the back of the Scottish maul.

This time Hogg made no mistakes, taking Scotland to a five-point lead.

Although they clawed their way back to within two with a penalty to Garibisi, Italy were dealt a blow a quarter of the way through the match with a yellow card to Frederico Mori for a late tackle, with a tucked arm.

Scotland made full advantage of the extra man almost immediately, as Darcy Graham received the final pass from Huw Jones to run in for one of the simplest tries he will score. Hogg's troubles from the tee continued, however Scotland had their tails up.

As the sin bin wound down for Mori, Scotland took a final shot with an extra man, as Van der Merwe broke through up the touchline before eventually releasing Huw Jones who sprinted in for Scotland's fourth try.

Hogg added the conversion as Mori ran back onto the pitch, with the hosts in a 14-point lead.

From one end of the pitch to the other!

Italy looked to get some momentum heading into half time, with a penalty on the halfway line which they put deep into the Scottish half. They were unable to make the field position count, however, as they knocked the ball on at the breakdown to head into halftime. 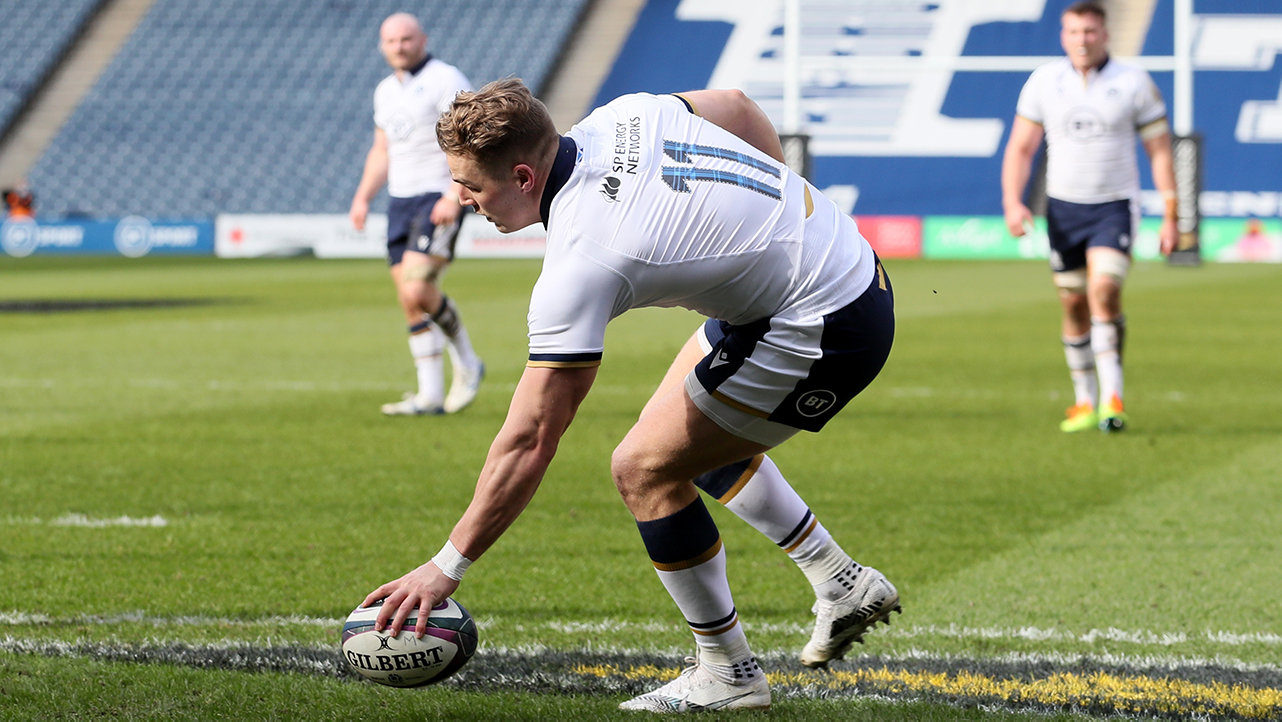 Scotland will head to France on a high

The Scots continued where they left off in the start of the second half, with Cherry benefiting a second time from the back of the Scottish maul. His try was converted by Hogg, extending their lead in the first five minutes of the second half.

Dave Cherry gets his second try!

Italy's job was made even more difficult as they received a yellow card for repeated infringements within their 22m, this time to Sebastian Negri.

Scott Steele was able to use the subsequent scrum to cross over the line, after Sam Johnson made a strong run and was stopped just short. Hogg added the extras, compounding the Italians' woes.

As Scotland looked to put the game away, spreading the ball wide, Italy's discipline began to let them down greatly as they received a third yellow card, with a minute left of the previous sin bin.

Monty Ioane was shown yellow for a tip tackle on Hogg, bringing his side to 13 men for at least a minute before the return of Negri.

Scotland got their seventh try of the afternoon after a powerful, well taken run from Sam Johnson just five metres out of the Italian line. He bumped off the defender to score. Hogg extended the lead to 35-points en route to their biggest win in the Six Nations.

Just when it looked like Italy was building some phases together, Ali Price of Scotland got the turnover and put Van der Merwe into space, who ran 50 metres under the posts, taking Scotland over 50 points.

Echoing their late first half efforts, with a minute to go in the match, Italy looked to get a consolation score with a lineout deep in the Scottish half.

The lineout was won by Scotland, however, securing the 52-10 victory and their biggest victory in the Six Nations.