'You pick someone who you would to go into the trenches with, Sean O'Brien is a fella you'd bring with you'

Alan Quinlan says Ireland's trip to Wales this weekend is the perfect opportunity for Sean O'Brien to return to his best form on the international stage.

The Ireland back row has struggled with injury in recent years and has been in and out of the international squad, with an announcement coming last month that he is set for pastures new when he makes the move to London Irish.

Speaking on Friday's OTB AM, Quinlan explained why he thinks this weekend's championship showdown with Warren Gatland's side could give O'Brien's season a shot in the arm.

"I thought he was back to his best in 2017 during the Lions tour he was superb. He had his moments in the game, his physicality," he said.

"He was superb. Any back row has to cover ground around the field and look sharp even without that ball.

"You kind of see that energy in Sean. He always had that energy around the field. He was always someone the opposition were very, very wary of with and without the ball.

"He's the kind of fella who turns up time and time again. What we've seen from him this time since he's come back is that maybe he's not looking as sharp or as imposing.

"But sometimes in sport or in life you look for characters. You look down into someone's soul and you say, well the character doesn't change. The legs may change a little bit.

"Is there a performance in him? Can they come out fighting?" 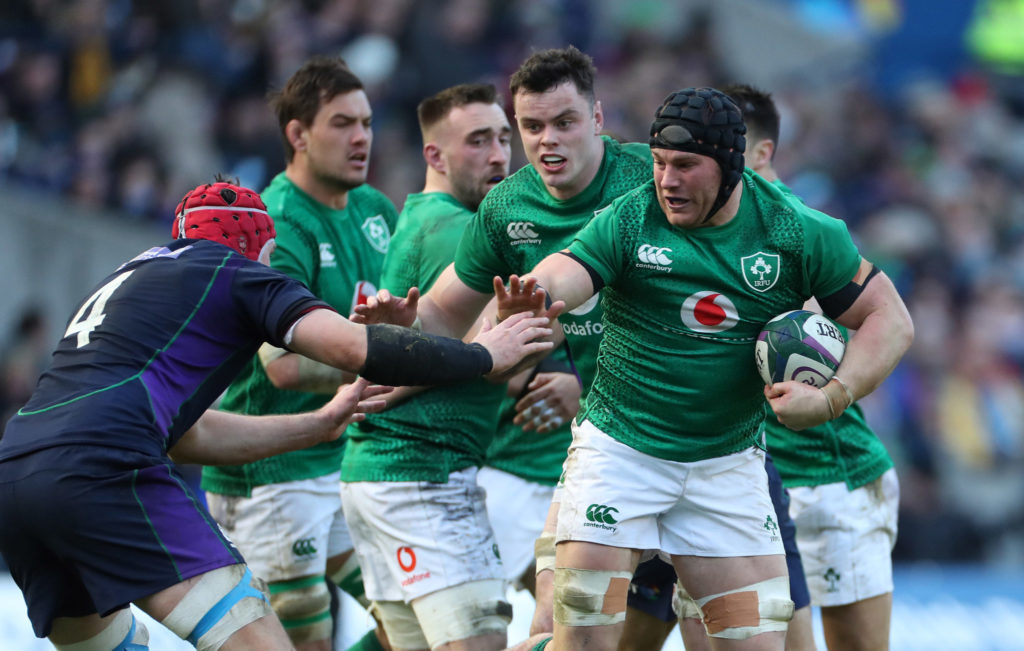 Sean O'Brien is supported by James Ryan against Scotland.

He continued: "It's the nature of high performance sport that there are so many other guys and if you underperform at any stage, you'll be under pressure.

"I sense something good is going to happen out of this for Sean O'Brien. I hope I'm right for obvious reasons. I like him, I think he's a great player.

"He's so popular, everybody would love to see him [get back to his best]. He's such a resilient fella.

"I played against him toward the end of my career. I was taken aback at the start of how tough this guy was.

"He's the type of fella you want in your corner who's not really daunted by what's ahead - he has a real warrior spirit."

Quinlan also said that Ireland need to learn the lessons of 2017 if they want to remain in the hunt for a successful title defence.

"Two years ago we were bullied in the back row - Stander, O'Mahony, O'Brien - all these guys were stopped at source. Wales will try to do the same [this weekend].

"I'd just like to see Sean O'Brien smashing a couple of fellas in the game and getting that feel-good factor back within himself.

"Obviously he'll have to track around the field and do his work [...] that's the question - can he keep up with the pace?

"But you pick someone who you would to go into the trenches with, Sean O'Brien is a fella you'd bring with you."

'Sometimes in sport and in life you look for characters. You look down into someone's soul and recognise that the character doesn't change.

'The legs may change - but is there still that character in O'Brien?' 💭

Everyone’s in the Team Of Us.
Vodafone. The Official Sponsor of the Irish Rugby Team.

"He could have killed the guy" | Quinlan condemns dangerous Tuilagi

'He was messing, even though it was wrong' | Quinlan on Marler incident