Amnesty International has teamed up with Bohemians in an attempt to highlight the 'ongoing human ...

Amnesty International has teamed up with Bohemians in an attempt to highlight the 'ongoing human rights scandal' of Direct Provision.

The club's new away kit will display the slogan 'Refugees Welcome' and the image of a family fleeing war.

Bohemians' director Daniel Lambert praised the club's main sponsor for their help in giving up the space at the front of the new shirt.

"We are delighted to unveil this very special shirt today which was made possible by our main club partner, Des Kelly Interiors," said Lambert.

"Football is a universal language and it can be a vehicle for great good in our society.

"At the core of the Bohemian identity is inclusiveness and a desire to utilise football as a means to improve our society as a whole.

“We made the decision to allow our shirt to be used a platform, alongside Amnesty International, to highlight a very real and pressing issue in Ireland today, that of Direct Provision.

"This builds on a deep and lasting relationship we have built with MASI and through multiple engagements with people living in Direct Provision." 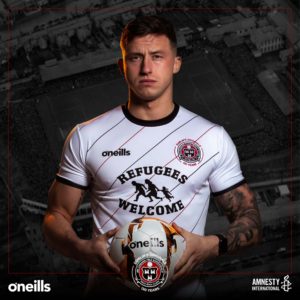 Bohemians defender Rob Cornwall in the new away shirt

The club has been bringing people from Direct Provision centres to games at Dalymount Park for a the last two seasons while last Christmas they had a fundraising drive to buy presents and host a Christmas party for families living in Direct Provision.

Executive Director of Amnesty International Ireland, Colm O’Gorman, is calling on whoever ends up forming the new government to start tackling the issue of Direct Provision which began two decades ago.

"Bohemian FC and their supporters have an incredible track record on social justice issues," said O’Gorman.

"We’ve long respected the practical solidarity they’ve shown people seeking asylum and refugees, so this is a fantastic opportunity to bring our supporters together to call for an end to direct provision.

"Direct Provision is an ongoing human rights scandal. The system is fundamentally flawed, trapping people for years in limbo and isolating them from communities in inhumane, institutionalised conditions.

"We know there are challenges like the current housing crisis, but this has been going on for 20 years through successive governments.

"We need a new approach, one that protects people’s human rights.

"The Direct Provision system is hurting people, especially vulnerable groups like victims of torture, and children and families. So no more excuses. This has to end." 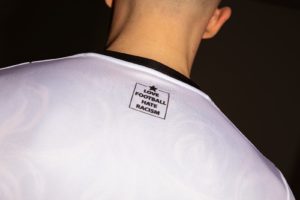 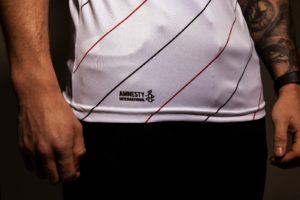 "It is encouraging to see the club forge relations with asylum seekers who regularly attend matches and the team opening the stadium for us to use for events.

"We wish to congratulate Bohs on the launch and look forward to more collaboration. We thank the whole Phibsborough community for the continuous support."

The shirt is currently available to buy on the official Bohemians website.