Houghton: 'To take on AC Milan, that would have been the perfect game of that era'

Liverpool and Ireland legend Ray Houghton admits missing out on European football during the club's dominant spell toward the end of the 1980s was "tough", adding that to pit themselves against Italian giants AC Milan would have been the "perfect game" for that era.

Speaking on Friday morning's OTB AM, Houghton cast his eye back on the great Liverpool teams of the past and examined the current crop's title tilt.

"I certainly felt that we were more than good enough to compete for the European Cup," he said. "There wasn't many around Europe who we were afraid of at that stage.

"That AC Milan team and who they had at that time were phenomenal. To pit your wits against the best and to come out on top is always very special. But not to have that opportunity was tough.

"Not through the fault of any of the players that were there, we would have loved to represent Liverpool in that great competition because it already had a rich history prior to that.

"In our prime, not to get the opportunity was very tough. To take on AC Milan to see who would have come out on top, that would have been the perfect game to be honest." 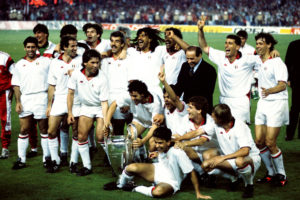 AC Milan celebrate with the European Cup in 1990.

One part of the reason for Liverpool's dominance during that time was the quality of players they had at their disposal. Legends like Ian Rush and Kenny Dalglish are always talked about as two of the club's all-time legends, but Houghton admits there was one player who stood out during that period.

"For three seasons, John Barnes was virtually unplayable. You look at when he arrived and I came in, I think we finished first, second, first in the league.

"We were the dominant team at that stage and John was the reason why. He was a special player, he had everything you wanted in a player.

"His attributes; he was quick over the ground, dangerous in the air, he could beat player. He was a complete all round player."