Has a city ever been so synonymous with a sporting event of such significance? Istanbul, Turkey. ...

Has a city ever been so synonymous with a sporting event of such significance? Istanbul, Turkey. Wednesday, May 25th, 2005. Those basic details are sufficient to conjure the pent-up emotions of millions. As a matter of fact, 'Istanbul' alone would suffice.

The 2005 Champions League final was so unimaginable as an evening's entertainment that if it were a game of Football Manager and you were in charge of AC Milan, you would quit and exit without saving and tell nobody about it. No one would need to know about a glitch of that prominence in a computer game so beloved by the masses.

It was an anomaly of epic proportions so bizarre that it makes one grimace for better or worse when you really think about it. Fifteen years on, we're strangely numb to '0-3, half-time', '3-3, full-time', 'Shevchenko'... 'Dudek!'... 'ecstasy/heartbreak!!'. Unfathomable theatre.

I haven't even mentioned Liverpool yet. There is no need, you all know. You wouldn't be here otherwise. But just how in the hell did all that happen? Neil Mellor, the ex-Liverpool striker who played a key role that campaign, did his best to explain it to Off The Ball recently.

The Italian giants raced into a 3-0 first-half advantage courtesy of the legendary captain Paolo Maldini and a brace from on-loan Chelsea striker, Hernán Crespo. Brazilian superstar Kaká - two years away from winning the Ballon d'Or - was orchestrating everything good about beautiful football in that initial period of play.

At the interval Djimi Traoré was told to take a shower, he was coming off. However, it transpired that Steve Finnan was injured, so Traoré stayed on and Didi Hamann replaced Finnan. In the first-half, Vladimír Šmicer, no more than a squad player that season and about to leave the club, came on for the injured Harry Kewell, who should never have started.

Between the 54th and 60th minutes, skipper Steven Gerrard, substitute Šmicer and Xabi Alonso scored. Within six minutes, it was 3-3. Liverpool then hung on. Jamie Carragher survived cramp, Shevchenko should have won it in extra-time and Dudek performed penalty shootout heroics to deliver heaven on earth.

How the hell did all that happen? 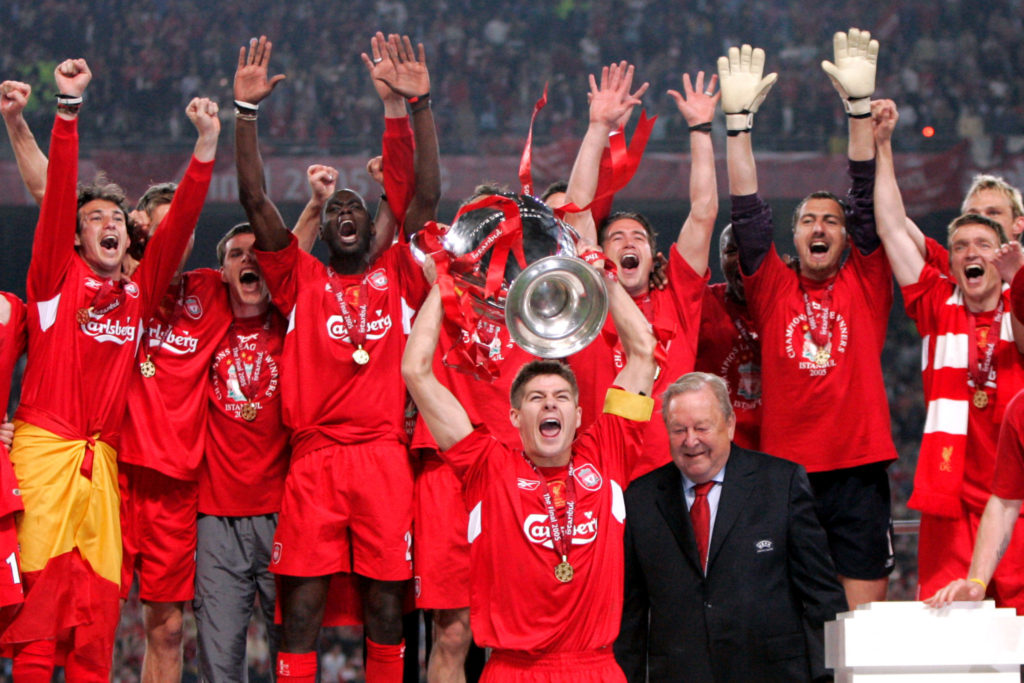 Reflecting on such a momentous occasion, Team Off The Ball asked one another, 'where were you this night 15 years ago?'

Here are some of their stories, from a mixture of Liverpool fans and anything but Liverpool supporters.

"It was the night of my secondary school graduation. I was in mass so missed the first-half. At the end of the mass, my Dad - a Manchester United fan - had great pleasure in telling me it was half-time and Liverpool were 3-0 down! My heart sank, I thought, "That was that over".

"By the time I reached the party venue - a pub function room - it was 3-2. We headed up to the room for the formalities of the graduation but there was no TV screen up there. Once the formalities were over, I headed downstairs to check the score. It was coming up to the 90th minute and, to my disbelief, it was 3-3.

"I headed upstairs excitedly to tell my Mam what was happening and she didn't believe me. I stood watching extra-time; nervous, excited, hoping that apart from the 2001 season, this was the biggest title Liverpool would win since I was a fan (I was just about two years old when they last won the league).

"Extra-time ended. I once again ran back upstairs to tell my Mam it was going to penalties. I headed back down to the big-screen and watched on as Dudek did his 'Grobbelaar legs'. When Dudek saved that fifth kick from Shevchenko, the tears started.

"I watched Gerrard lift that fifth European title and went back upstairs to join my classmates to celebrate our graduation. Or, in my mind, Liverpool winning.

"What I didn't mention at the start was that I was in an all-girls school so only two of us actually cared and tried to grasp what had happened in Istanbul!"

"I watched the game in Boland's in Stillorgan (Dublin) and I got there at 5.30pm to make sure I got a seat. The place was packed and I never knew there were so many AC Milan supporters from Ireland living in the area.

"My feeling going into the game was Liverpool would have to score first to have any chance, so when Maldini scored in the first minute, I feared the worst and by half-time it was despair. My hope was for Liverpool to keep the score down in the second half and maybe even nick a goal to make it a bit more respectable but that all changed in six minutes during the second half.

"When Šmicer scored the second (as I roared at the TV not to shoot!), it all changed. Now it was game on and when it went 3-3, I thought there's only one winner from that moment. But, it didn't play out like that, even though Liverpool lifted the trophy in the end.

"So often you see a team survive a few scares before winning a penalty shootout and I knew it was done when Šmicer scores the fourth penalty.

"The party went long into the night and, of course, I ended up in Coppers!"

"I watched the final in MacSiurtains (Macs Pub) in Ballyhaunis (Mayo). I flew home from America that morning and had hoped to go to the game but I was in Fiji for the semi-final and spent so much money trying to get back to Europe that I’d no money left to go to Istanbul.

"Macs is a major United supporters pub so it was all the more enjoyable!" 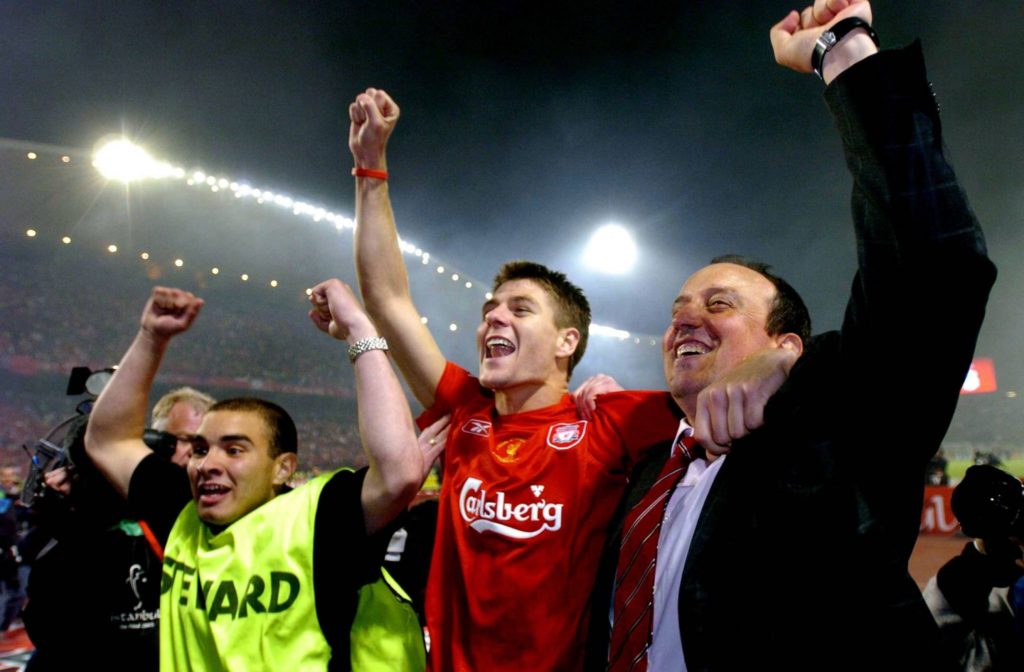 "I watched it sitting on the same seat at home as I had for every Champions League final around that era, taking considerable joy as a Manchester United fan in the trouncing Milan were giving Liverpool over those first 45 minutes.

"Many texts were sent at half-time to distraught Liverpool fans I knew and, boy, was my face red a couple of hours later. I could only smile, really. It was an incredible comeback, up there with the course of events in Barcelona at the same stage six years earlier. Up there, not better!

"Never have I been more convinced of a certain goal watching any passage of play than I was when Andriy Shevchenko had that gilt-edge chance from point-blank range which Jerzy Dudek somehow saved. It was a freak occurrence on a freaky night.

"The outcome of the penalties didn't surprise me half as much, other than Andrea Pirlo (before he officially became cool) and John Arne Riise missing; that was a great save by Dida. I had a feeling Shevchenko would miss. There was something about the shuffle of his hair right before striking the ball that uneased me.

"School the next day was a bit of a non-event on the academic side as everyone was in a state of sporting shock, including many teachers. My abiding memory is 'You'll Never Walk Alone' playing over the intercom to the entire school which really was a disgusting decision and abhorrent on the eardrums."

"As a 12-year-old Manchester United fan, I was probably a very happy boy at about 8:30pm on Wednesday, May 25th, 2005 and, as was customary in those days, I legged it outside once half-time arrived, rejecting the chance to watch all the ‘bluffing’ and analysis, grabbed my football and chased my shadow around my back garden re-enacting Milan’s brilliant first-half, until it got dark.

"I arrived back to the TV late to the second half, just in time to watch Xabi Alonso hammer home that rebound to make it 3-3.

"Sure, I was shocked and I knew I was watching something special, but even at that age, I knew I’d be paying for it. This was devastating stuff – I had Liverpool-mad uncles and cousins you see, and family who had been living in the city for the past 50 years. A strong cohort of my primary school class were Liverpool fans, too.

"We were never going to hear the end of this one. I had always rejected the opportunity to join in and sing YNWA at the family weddings up to this point, probably silently seething at how much they seemed to care about it all. How was I going to put up with them after this? Such small worries to occupy the mind!

"That misplaced bitterness of mine probably only revealed itself one more time in the game, and it’s really the only moment from the game that sticks out to me – Jerzy Dudek’s incredible save from Andriy Shevchenko in extra-time - how he kept it out, I still don’t know.

"For the record, a part of me was genuinely happy that my relations who had paid money to go to Istanbul, or spent years supporting them, had something to celebrate. I’m not that bitter!"

"I had moved to Liverpool for university in September 2004, safe in the knowledge - as a Manchester United fan - that Liverpool were in the doldrums, relatively speaking. What I didn't account for was the fact that Rafa Benítez would go to work in an unreal way, seemingly sacrificing the Premier League for the cups.

"I had to endure mates of mine who were season ticket holders coming back, pissed on success, from Anfield after nights like the Olympiacos and Juventus games. This was also going on while Everton - Kilbane, Gravesen and Bent, et al. - were storming their way to fourth place, and printing t-shirts like 'Rafael Beneath-us.'

"So, that night in May... I had just been unceremoniously mugged off by a girl I was really into (she got with someone now a close mate - f*ck you, Ad!) and I began to feel the first rumblings of what turned out to be a brutal dose of mumps. My face made me look like a curly-haired Jerry Krause.

"I'd been at Old Trafford to watch Roy Carroll chuck one in against AC Milan, so was suitably ready to see us beaten by the ultimate champions of the competition. There I was, covering my face before it was fashionable, at half-time in Istanbul where I remember thinking, through the laughter, 'They are an English team after all - I don't want them to get humiliated.'

"How I wish I could take that back. This, meanwhile, was happening as a United mate of mine took a 200-1 bet for a quid from a Liverpool fan, with him saying they wouldn't make it back from this.

"As he became 200 quid lighter, I went back to my room and for the worst sleep of my life as the celebrations of delirious Kopites went on around me.

Great times indeed, or at least unforgettable for several! So, what are your memories of that famous occasion? Tweet us at @offtheball or WhatsApp us on 087 9 180 180.

How well do you remember Liverpool's 2005 Champions League final in Istanbul?