"I've spoken to him" - Jon Walters on Declan Rice's dilemma

Jonathan Walters was on co-commentary duty for us at a chilly Etihad for Manchester City vs Liverpool.

And at full-time, Nathan Murphy got his thoughts on City's 2-1 home win over the Reds as the gap to the leaders is reduced to four points.

"As I said before the game, what a game to be able to commentate on," said Walters.

"It was an unbelievable game, fast-paced, high-pressing from both teams. Great spectacle. It just shows the differences at this level - such a minute difference - and half a yard off it. We talk about inches as you say." 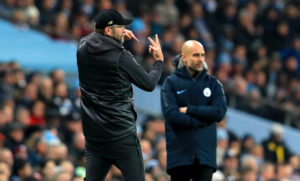 Walters also explained what he felt made the difference for City in edging Liverpool.

"I think they dominated the game. I think they had control, and although Liverpool got back in it, there was no real danger from them - although they did have that chance that Jon Stones has cleared off the line," he said.

"City were the better team. When it mattered most, they were the ones that were most clinical and put the ball in the back of the net."

He also praised "the standout player today" Fernandinho, highlighting his impact in the Man City midfield by protecting the defensive line.

Meanwhile, Nathan also got Walters' view on West Ham's Declan Rice who is still to choose between Ireland and England at international level.

The latest noises suggest he will choose Mick McCarthy's Ireland. But there have been other murmurings that major clubs are taking an interest in him in spite of the fact that he has only signed a new contract.

"He had a difficult start to the season, out of the team. He's come in and made the position his own. He's unbelievable and every time I watch him, his composure for a 19-year-old... he's 19, he's played a full season. It's his second one and he's a stand-out player for West Ham," he said, before suggesting that Rice will be good enough to feature at the highest level in future such as tonight's Man City vs Liverpool fixture if he develops at his current rate.

"He does all the work that Fernandinho does there. If I was one of the big clubs, although he's signed a new contract, he's one player I'd be looking at."

And on his Ireland future, "I've spoken to him but I'll keep that to myself and you know what I've said but a player of his quality, you want him involved."

'Wanted: for crimes against Irish football' | Kilbane, Doyle and O'Shea on Staunton reign