With revelations continuing to emerge over John Delaney's time as FAI CEO and as stories break on a weekly basis, it's hard to keep track of how we got to this point.

Reporting from Mark Tighe and The Sunday Times have helped bring about seismic change within the FAI, with the board set to step down this summer and Delaney currently on gardening leave.

Speaking on Friday's OTB AM, special guest co-host Paul Howard gave an insight into the Delaney of old - the man who appeared to be the 'future of sports administration'.

"I knew John reasonably well around 2001 and 2002 when I was a sports writer with the Sunday Tribune," he said on this morning's show.

"John looked like he was the coming man in sports administration.

"He was fantastic. He spoke sense on the Eircom Park issue. He had all the figures worked out and showed that it wasn't feasible for the FAI to build a stadium of their own in West Dublin and the sensible thing was to go in with the IRFU and have a stadium walking distance from Dublin City Centre.

"The Saipan issue, when Brendan Menton wasn't really a strong voice during that time, John Delaney stepped forward and did PrimeTime and the Six One News.

"He was only in his late 20s or early 30s but you looked at this guy and thought: 'This guys is special.'

"To see him now become that guy with the huge six-figure salary, to have all his bills paid by the FAI and then sit in front of an Oireachtas Committee refusing to answer questions, essentially pushing some young guy forward to answer questions for him - you couldn't have believed this of Delaney 17 or 18 years ago.

"It's sad to see that he's just become that figure. When I look at him I think: 'What a disappointment.'" 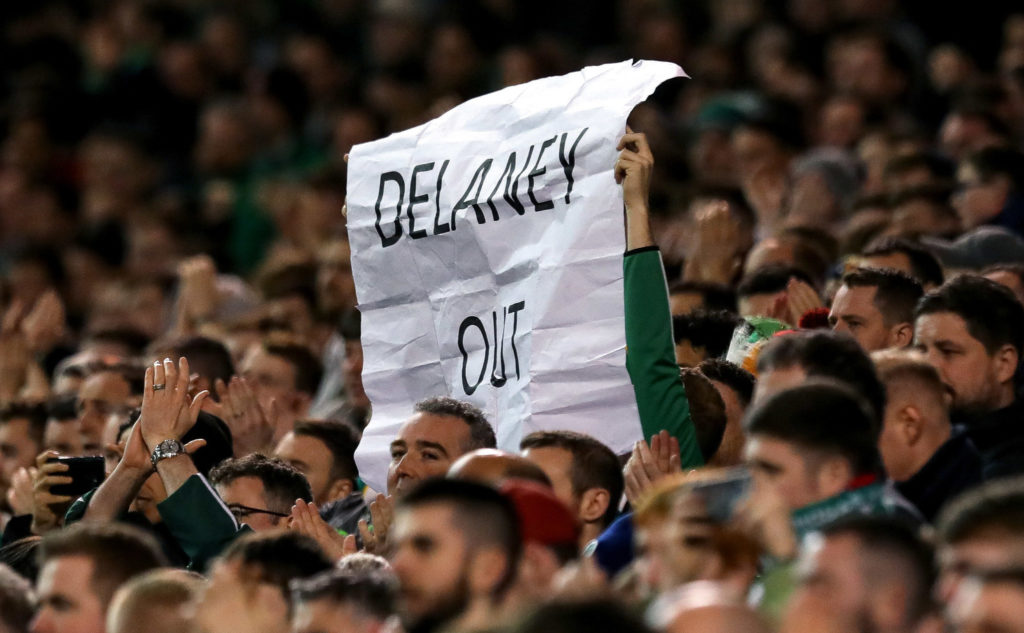 Now, the future looks decidedly more bleak for Delaney. His future with the FAI remains unclear, as does any roles he might have been in line for with UEFA.

"He must have huge self belief if he thinks he can come back from this" Howard continued.

"If he thinks in five years time he's going to be looking back on this as just a blip in his career and him still sitting in the FAI behind a desk - I don't think politicians are going to allow that to happen.

"I think Delaney is dead in the water. I don't understand why he'd put himself in a position where he's standing in a ground watching football.

"That won't be part of the narrative."

FAI implement pay deferrals as a result of COVID-19 shutdown

FAI aiming for a late June start to the WNL

'We have to look after our frontline services' | Stephen Kenny