Keith Andrews says he was "surprised" by some facets of Martin O'Neill's appointment as Nottingham Forest manager, but admitted that the English public wouldn't have as detailed an account of his tenure as Ireland boss as those on this side of the water.

Speaking on The Keith Andrews Show on Off The Ball this afternoon, Andrews pointed out that the former Aston Villa, Sunderland and Celtic boss' reputation may not have taken a hit in the eyes of Forest supporters.

Instead, much of the coverage of his appointment would point to his achievements with Ireland and 'overachieving' with a squad with only a handful of Premier League players.

"I have to say I was surprised," he explained. "Not surprised to see Martin O'Neill back in work, because his reputation in England didn't take as much of a dent as it did in Ireland.

I'm led to believe that the owner likes to have a little say in who plays... 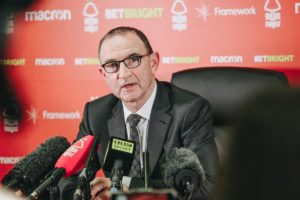 "He's going to take over a talented Nottingham Forest squad that are literally a few points off of the play-offs. The aspirations of that club are huge.

"They've invested significantly in that squad. I think it's a really good opportunity for him.

"The reason I'm surprised is the relationship between the owner and [Aitor] Karanka [former Nottingham Forest boss] had deteriorated drastically.

"I'm led to believe that the owner likes to have a little say in who plays. I don't think that will go down particularly well with O'Neill."

He added: "But obviously the romantic, nostalgic side of it. He's a club legend from his playing days and has won a European Cup."

To catch up on any of our previous episodes of The Keith Andrews Show, check out our Youtube channel or stay tuned to Off The Ball's social media platforms - @offtheball on Twitter or you can catch our full live videos on Facebook.

Robbie Henshaw ready to step into the 'hostile cauldron' at Twickenham