If there's a team of the Premier League season so far, there's a fair chance Fabinho would be in there.

Like many of Jurgen Klopp's signings, it takes time for players to get up to speed. And Fabinho is no different.

Similarly to the way Andrew Robertson (lest we forget, he started as Alberto Moreno's understudy initially for the first weeks) eased in before becoming a frontline player, the Brazilian took a little time to earn his starting place. It's the same hope some hold for Naby Keita.

But since he did in the middle of last season, the ex-Monaco player has been a revelation. That zone between defence and midfield had been one that opposition teams used to target in the pre-Fabinho days.

Ex-Ireland and Crystal Palace defender Damien Delaney had first-hand experience as he told Off The Ball earlier this season.

"Liverpool never played with anyone [in that role] sometimes," he told us.

The Cork man also added: "Fabinho coming in has definitely helped Liverpool defensively. Not only with tackling and winning the ball back or filling passing lanes. But also an option. As a centre-back, you know he's always going to be there."

So fast forward to the Man City match. His thunderous early goal will take all the headlines. And that's no surprise as it was a precise finish from range just after a moment of handball controversy at the other end of the pitch. 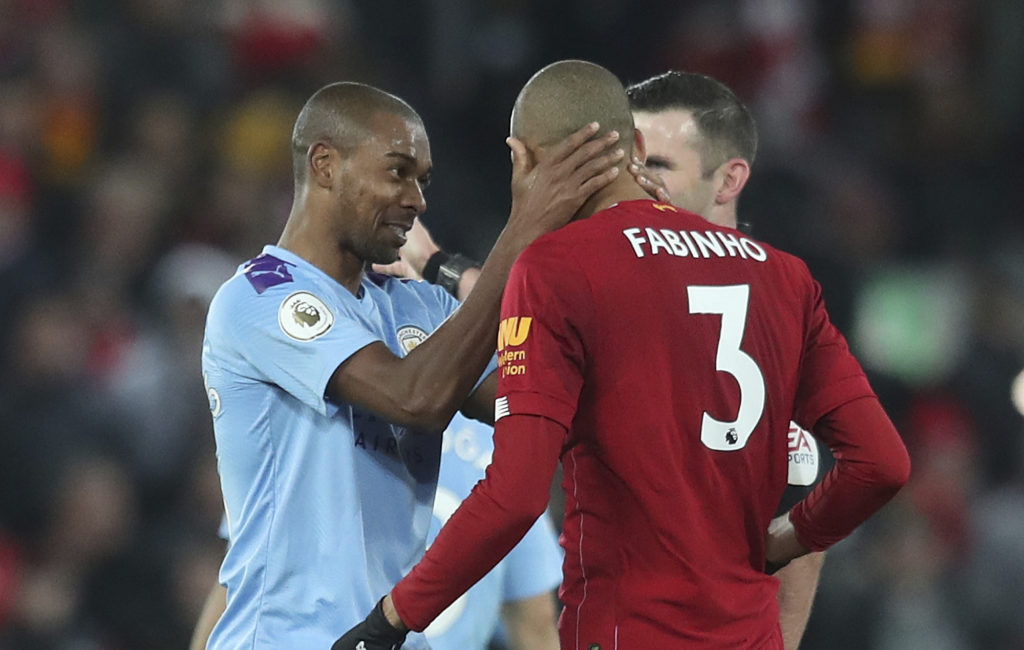 But more fascinating was his positioning defensively and how Jurgen Klopp gave him a helping hand.

If you watch the first-half closely, Gini Wijnaldum took up the centre-left side of the 4-3-3, with Jordan Henderson on the other side.

One would expect Henderson and Wijnaldum to push further forward when it came to pressing. Instead though, Liverpool's midfield shape was a little lopsided.

Henderson pushed further forward. But Wijnaldum was sometimes right on Fabinho's toes, almost in a double pivot, tucking in from the left when Liverpool were pushed into their own half.

An interesting moment was around the 24-minute mark. Man City had Liverpool penned in. That was on Liverpool's left flank and an area where City have been dangerous previously when Kevin De Bruyne and Bernardo Silva combine. Wijnaldum and Robertson held their ground in tracking their immediate marker. But if you watch Fabinho in that passage, the 26-year-old almost had a free role.

Rather than marking De Bruyne, he made runs essentially with the objective of shutting off passing lanes towards the edge of the box. He wasn't quite as effective though on the right side when De Bruyne threaded through a pass for Angelino who went on to hit the post. And a physical duel between the two on the edge of the box went the Belgian's way when City scored their only goal.

However, the Liverpool No 3 didn't just sit in front of the back-four, mopping up. He also pressed high at times when City's goalkeeper was in possession. On those occasions when Fabinho ventured up-field, Wijnaldum would sit deeper offering protection. It was a tandem that worked well, even if City did carve out chances when they went wide. Technically, a similar pattern occurred for his goal as Wijnaldum hung back a little as Fabinho charged forward to meet the ball.

On the ball, Liverpool didn't play through their midfield much. But that's no surprise. Indeed, when it comes to touches on the ball, Trent Alexander-Arnold had more than Henderson and Fabinho combined and far more than any other player. The passing stats also have a similar pattern with Alexander-Arnold leading the way and Fabinho in the midfield pack literally and figuratively.

But all in all, Fabinho was excellent in his main brief of helping to reduce the City threat on the outer reaches of the 18-yard galaxy.

Fabinho ruled out until the New Year