They looked like the juggernaut that would steamroll all before them.

Pep Guardiola's Manchester City entered the festive season unbeaten in the Premier League and with Liverpool and Tottenham hanging onto their coat-tails.

The fear was that they would shift into overdrive and run away with the competition - that it would be a procession akin to last season's recording-breaking success.

But since their defeat to Chelsea at Stamford Bridge, City have looked vulnerable. In the weeks leading up to the defeat, they had leaked goals at home to struggling sides Bournemouth and Southampton - highlighting their vulnerability at the back.

For all that those goals amounted to nothinh when you take into account the results (3-1 and 6-1 respectively) it still served to show that City were there to be attacked.

And for all their attacking prowess, Maurizio Sarri exposed their weaknesses at the back and ran out convincing winners at Stamford Bridge. Since then, a shock home defeat to Crystal Palace and a loss away to Leicester have seen them tumble down the table.

"A lot of the teams right now might think: 'We've got nothing to lose, we went there with a defensive attitude and were beaten anyway'," John Giles explained on Off The Ball on Thursday evening.

"They might as well have a go, because the worst they can do is lose.

"It's hard to put your finger on these situations, when City have been dominant for a very long time and then all of a sudden in three of their last four matches they're losing.

"A lot of it comes down to the fact that they haven't had a full team out a lot of the weeks, they've picked up a few injuries."

He's lost three matches and people are questioning whether he is a genius or not... 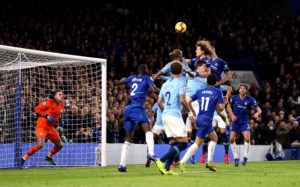 Guardiola's target will undoubtedly be to succeed in the Champions League and his side even entered the tournament as favourites to lift the trophy. However, a falter at this busy stage in the season could considerably hamper their ambitions to maintain their challenge to defend their league title and impact on their European campaign.

This most recent slip has called into question Guardiola's ability to manage his team and to reverse this slide. Criticism of his abilities may be premature, says Giles.

"He's had a bad week in the space of a season and a half. What happens with all things in football, last season he was a genius. Now he's lost three matches and people are questioning whether he is or not.

"We'll find out now if he's any good. But it happens. Any team can lose a few games. You compare to what he's done. The last month has been a bit of a disaster but if he hadn't been doing so well or managing to win like they did last year, we'd be looking at him with a different eye.

"It's the manager's job to pick [the players] back up now."

City go to Southampton on Sunday before their crucial clash with title rivals Liverpool at the Etihad on 3 January.

Klopp says coronavirus was a distraction ahead of Atletico defeat