Upsetting Leeds United at Elland Road in the second-leg of their playoff semi-final, Derby County coach Shay Given outlined the tactical approach his side undertook to overcome Marcelo Bielsa's side.

In what amounted to a significant upset, Derby County, with Frank Lampard in charge and former Irish international Shay Given on the coaching staff, overcame Leeds United in what was a first for the Championship playoff semi-finals.

Before Derby's 4-2 defeat of Leeds at Elland Road, never before had a team that lost the opening leg of the semi-final clash at home come back to win the tie.

Speaking on Friday's OTB AM, Given outlined the tactical lessons Lampard & co. had taken from previous encounters with Bielsa's team and how they used this to their advantage mid-week.

"We kept our heads down after the first-leg," Given explained, "we knew we had to change how we play and do something different.

"Marcelo Bielsa is a fantastic manager, Pep Guardiola said he's the best guy he's ever worked under, one of the cleverest guys in football.

"How his teams press and play with the ball is very difficult to play against sometimes, so we felt we needed an extra man in midfield - and we did that.

"We felt that the fellas got the new system in a couple of days and we went out there and carried it out."

We didn't just say we're going to go to Elland Road and do a counter-attack job. We tried to exploit Leeds' high press 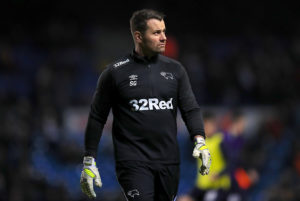 Going into greater detail regarding where things had gone wrong in the first-leg at Pride Park, Given outlined how Derby County planned to use Leeds' own strengths against them.

"We didn't just say we're going to go to Elland Road and do a counter-attack job," Given clarified, "we actually put a diamond in midfield and changed the two up top.

"It allowed us get a bit more support to the top two, where at home we had one striker and it was difficult to get bodies up to him.

"We just got that extra body in midfield, get more ball and possession, have composure on the ball - you can exploit Leeds' high press."

Only too aware that the job of getting Derby County into the Premier League isn't complete yet, Shay Given is expecting an altogether different game again when they meet his old club Aston Villa in the Championship playoff final at Wembley.

Richard Keogh ruled out until late 2020 with knee injury