There is still a lot of uncertainty surrounding the return of football in Ireland but the sight o...

There is still a lot of uncertainty surrounding the return of football in Ireland but the sight of teams training again will provide a much needed boost.

The financial impact of the coronavirus pandemic on League of Ireland clubs has been huge with several being forced to lay off playing and club staff.

The Premier Division and First Division seasons had played no more than five rounds before the FAI were forced to halt the season and plans for a resumption have yet to be finalised.

Four clubs were allowed to begin collective training this afternoon in groups of fifteen, including coaching staff.

Dundalk, Shamrock Rovers, Bohemians and Derry City are all building towards playing in a four-team tournament in July.

UEFA are due to announce their own fixture dates on 18 June but with the current season's European competitions only at the last-16 stage, it could be September before the Irish clubs get some European action.

Back at it today ☘ pic.twitter.com/ctWIvmpPDy

The Shamrock Rovers squad were out training at their Roadstone base in south-west Dublin under the watchful eyes and masked faces of sporting director Stephen McPhail (main pic) and head coach Stephen Bradley (below).

Bradley will be hoping when the season does resume that his squad can pick up where they left off having begun the season with five wins from five matches.

The Hoops are top of the Premier Division with a three point lead over champions Dundalk whom they beat 3-2 in February. 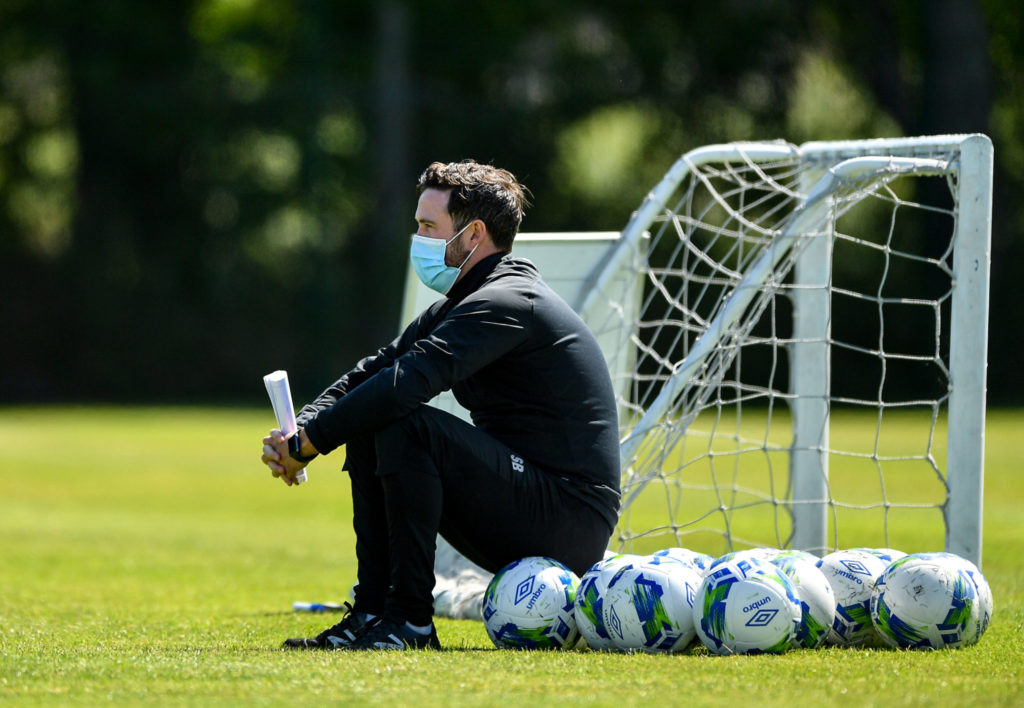 There have been two rounds of testing on the players and staff of the four clubs and last Thursday the FAI confirmed that the all of the second round tests, like the first, came back negative.

Dundalk will be the League of Ireland's sole representative in the Champions League once more and their goalkeeper Gary Rogers posted a short message on Twitter this afternoon: "Good to be back".

The defeat to Rovers, is the only blot on the champions' copybook and they were given a boost with the signing of former Tottenham Hotspur and Rangers winger Nathan Oduwa just before the shutdown.

Good to be back ⚽️ pic.twitter.com/9ft4fUmelp

Bohemians had to make an official apology last week after they admitted to an 'error'  in allowing two groups of three players to train at the same venue last week, which was a breach of the training guidelines.

Footage of the session at Father Collins’ Park in Donaghmeade emerged on social media but the FAI accepted the club's apology.

The Gypsies are gearing up to play in Europe for the first time since 2012 and have won three of their first five league matches this season to lie third, three points behind Dundalk in second.

Derry City have just four points in the bag but have played a match less than the other three clubs.

One of the Candystripes' standout players so far this season is Walter Figueira, who made the switch from Waterford at the end of last season, and he was sporting a face mask at today's training session. 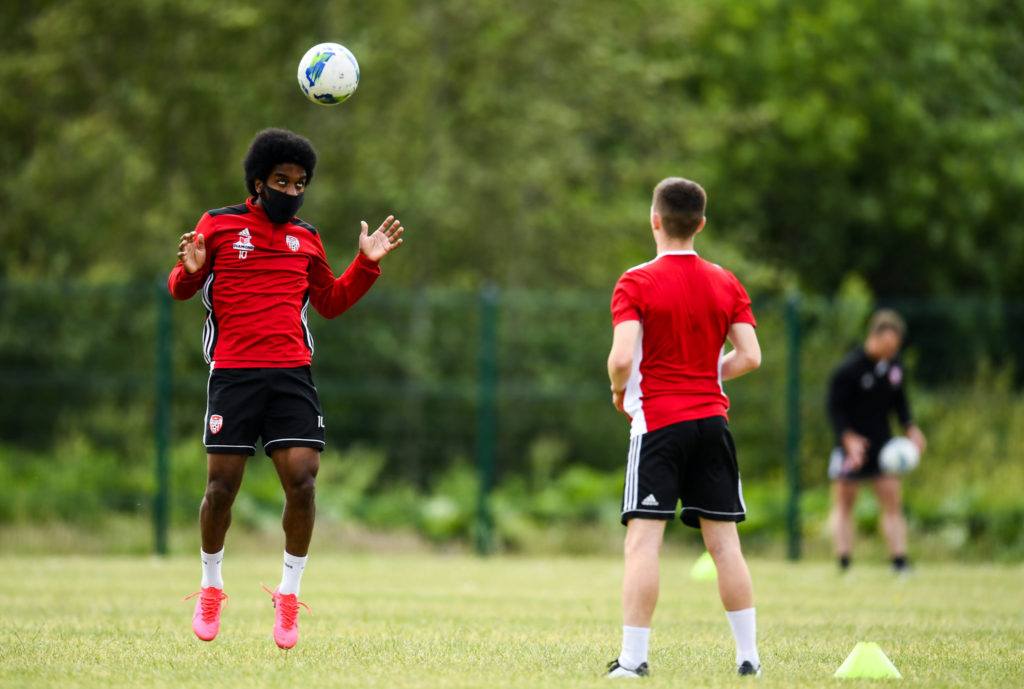 There are strict non-contact measures in place at the sessions and there can only be one group of fifteen working at the same time.

That means that clubs must stagger the sessions and, as evidenced by the photos of Derry City defender Darren Cole, players will continue to be checked out by medical staff ahead of the sessions. 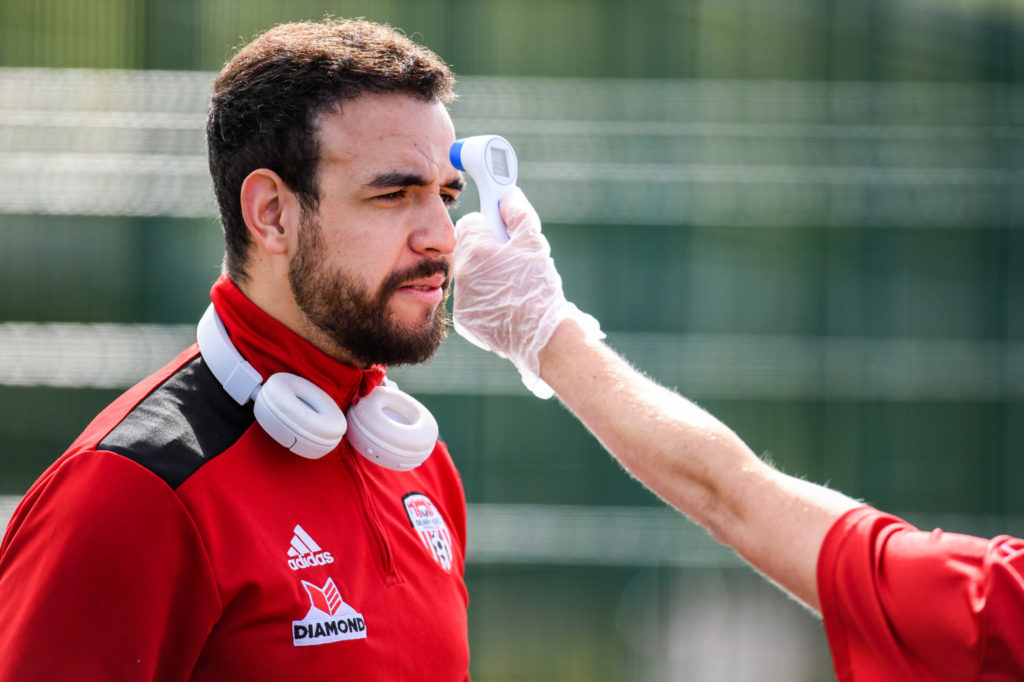 8 June 2020; Darren Cole has his temperature taken prior to a Derry City training session at Aileach FC in Burnfoot, Donegal. Photo by Stephen McCarthy/Sportsfile

There will be more tests conducted later today and again on Thursday while the FAI hope to provide further clarity on their plan for the season later this week.

It is understood that several clubs would still not be convinced about a return to action behind closed doors but there have been some suggestions that some supporters could be allowed to attend matches later this year.

The FAI's interim deputy CEO Niall Quinn has already talked about the possibility of obtaining funding from FIFA.

The president of world football's governing body, Gianni Infantino, spoke about their emergency fund at the weekend.

"We have to show unity across all aspects of football and make sure football can resume in its globality.

"This is our priority and our financial relief plan will also follow this prinicpal."