Revisiting his playing-days as a Premier League footballer on Tuesday's OTB AM, Kenny Cunningham revealed his central role in Joe Kinnear's master-plan for dealing with Manchester United's Roy Keane.

Venturing back into the mid-1990s, Cunningham, Wimbledon's regular right-back at the time, was presented with an alternative proposition for the side's forthcoming trip to Old Trafford.

"We went up to Manchester once," the former Irish international recalled.

"I was playing right-back for Wimbledon, but during the week Joe said, 'Right, I'm playing you centre midfield, just sit on Roy Keane and try to put him out of the game.'"

A fairly daunting task, perhaps, Cunningham's plight was nothing compared to that of the player replacing him at full-back.

Roy left one on me about five minutes before that anyway ... nobody would have known it was a man-marking role 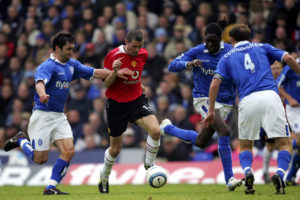 "Joe brought in a young lad at right-back who was reasonably inexperienced," Cunningham explained.

"The whole thing only lasted about 15-minutes, not because Roy was necessarily bossing the show, but the young right-back was getting twisted a bit by Ryan Giggs."

For Kenny Cunningham, his spell as a man-marker was short-lived.

"I got ejected from the central-midfield role that I was actually enjoying," laughed Cunningham.

"I was watching the kind of impact Giggs was having in the first 15-minutes thinking to myself, 'Thank God I'm not in my normal right-back role.'"

Not that he didn't leave without first-hand of experience of going toe-to-toe with the Manchester United captain.

"Roy left one on me about five minutes before that anyway," stated the former Wimbledon man.

"Nobody would have known it was a man-marking role. I just ended up limping back to the right-back position to face up to Giggs."

Is Ole Gunnar Solskjaer too nice to succeed as Manchester United manager?