Sarri leaves Chelsea to take over at Juventus

Juventus has confirmed that Maurizio Sarri has left Chelsea to become their new coach.

The 60-year old Italian took over at the London club last year, but his future had been in doubt for many months due to .

Juve announced last month that Massimiliano Allegi would leave the club - having taken over in 2014 and leading them to five Serie A titles, four Coppa Italia wins as well as to the Champions League final twice, most recently losing out to Real Madrid in 2017.

Allegri finished at the club with the highest win percentage of any manager in their history at over 70 percent.

Sarri arrived to the Premier League last July on a three-year contract and led the club to third in the table, while also winning the Europa League and reaching the League Cup Final.

The Blues ran out very convincing winners in last month's London derby in the Europa League final against Arsenal in Azerbaijan, which was Sarri's first piece of silverware as a manager.

They beat Unai Emery team, who won the trophy three times in a row while manager of Sevilla.

Goals from Olivier Giroud and Pedro, and a brace from Belgian international Eden Hazard helped the Blues to a 4-1 victoru in Baku. 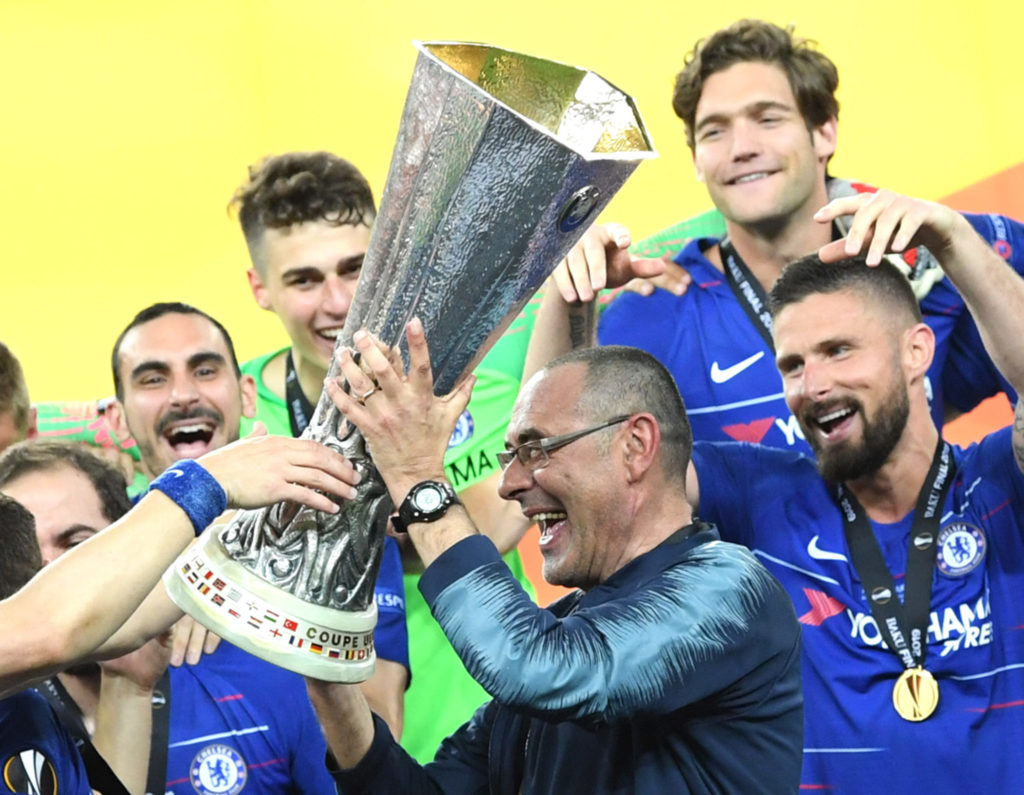 However, Sarri's future with Chelsea had been in doubt since February, when they lost 6-0 to Manchester City.

Two week later, the took on Pep Guardiola's side again in the League Cup final at Wembley, with goalkeeper Kepa Arrizabalaga refusing to be substituted shortly before the game went to penalties.

However, after that game Chelsea only lost two out of 19 games in all competitions until the end of the season.

Sarri's move to Turin could clear the way for Frank Lampard to take over the reins at Stamford Bridge.

The former Pensioners midfielder is the current manager at Derby County - who lost the Championship Play-Off final last month.

The former Dutch international Gullit, who won the FA Cup as a manager with the club in 1997 said, "He has done nothing yet as a coach, they gave me an opportunity and we won.

"It's important for Chelsea to get somebody they can relate to, and I also hope they get the right people around him who can help."

Meanwhile, Di Matteo who led the club to European glory in 2012 in Munich believes that Lampard moving is "a great fit".

The Italian said "He’s definitely the right man. He’s got personality. I followed Derby last year and his team plays very good football. He’s got all the experience in the world."

However, the new Chelsea manager will not be able to sign any new players due to a two-window transfer ban imposed by FIFA.

Fernando Torres and his bizarre career of two halves