Stephen Kenny has named his starting XI for his fifth match in charge of the Republic of Ireland....

Stephen Kenny has named his starting XI for his fifth match in charge of the Republic of Ireland.

The boys in green will take on Finland today in the UEFA Nations League B fixture, after having drawn to Wales on Sunday.

Kenny is still in search of his first win since taking over from Mick McCarthy earlier this year.

Under Kenny, Ireland have drawn two matches and lost two, with the most recent of their losses coming via a penalty shootout after a goalless draw to Slovakia.

The other loss came in Kenny's second match in charge against Finland in Dublin, where they lost 0-1. 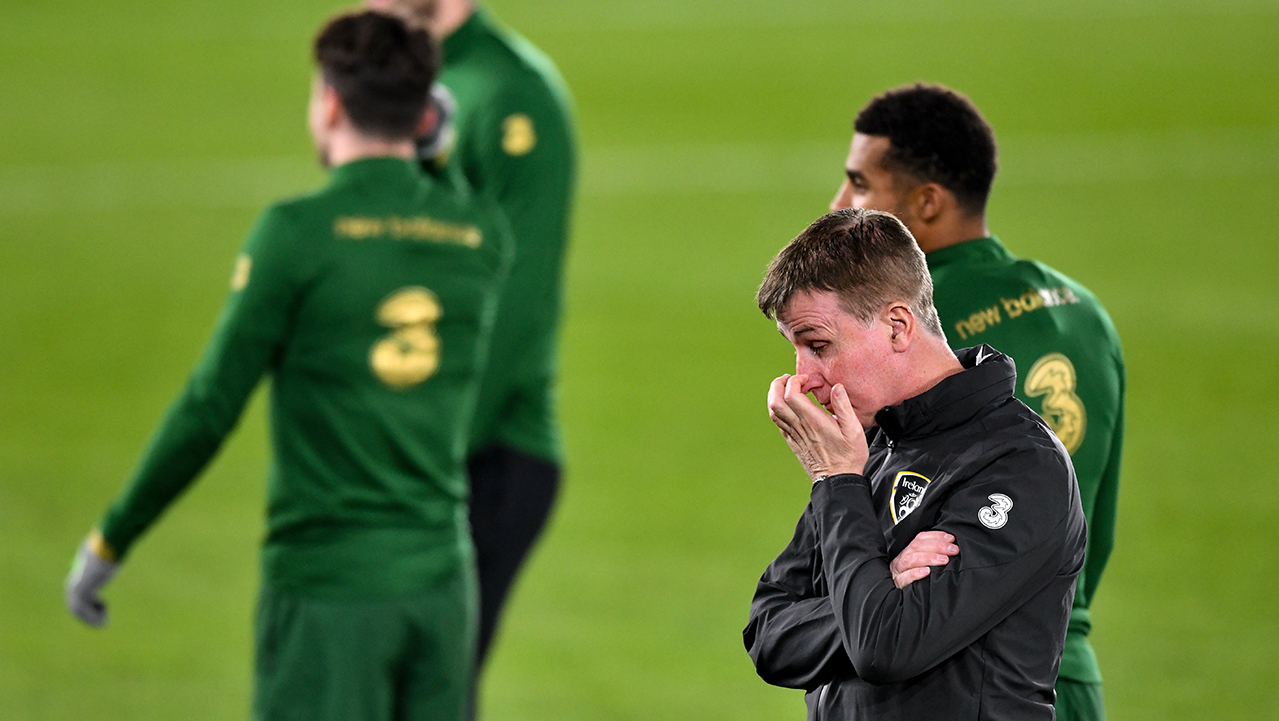 The Ireland squad has been disrupted in the lead up to today's game.

Callum Robinson, Callum O'Dowda, John Egan and Alan Browne all remain unavailable as they were deemed close contacts of an unnamed fifth player who tested positive for COVID-19 ahead of the match against Wales on Sunday.

Additionally, a second positive test came back for a member of the playing squad after Sunday's match. The player returned a negative test on Monday, before being reclassified positive again on Tuesday.

The squad was dealt a major boost, however, with the return of Aaron Connolly on Monday.

Connolly was ruled out of Ireland's EURO2020 qualifier clash with Slovakia last week as he was deemed a close contact of one of the back room staff that had tested positive for COVID-19 on Thursday.

The staff member's test was later deemed to be a false-positive, meaning that both Connolly and Adam Idah, who sat with Connolly on the plane to Slovakia, would no longer need to self-isolate.

After a strong performance against Wales on Sunday, which only lacked in finishing, Ireland will be hoping to score goals and get one back on Finland.

Kenny has made four changes to the side that drew with Wales on Sunday.

West Ham goalkeeper Darren Randolph keeps his place in the side after a solid performance in goals in their previous match.

He is supported by a back four of Matt Doherty, Shane Duffy, Dara O'Shea and Enda Stevens. Celtic's Duffy captains the side yet again.

O'Shea will run out for the senior side for the first time.

A front three of Connolly, Maguire and Horgan as Jayson Molumby keeps his place in the side 👍#COYBIG | #FINIRL pic.twitter.com/vBG9Z2fTvg

The attack will be lead by Sean Maguire, who comes in for Shane Long. Daryl Horgan comes in to replace Robbie Brady.

Jeff Hendrick and the returning Aaron Connolly, who comes in for James McClean after he received a red card against Wales, complete the team up front.

Adam Idah also comes back into the side, filling in a slot on the bench.